Amazon just introduced a new Alexa device: a $20 version of its Amazon Dash Wand with the voice-enabled smart assistant built in for ordering food, getting recipes and controlling smart-home devices.

The new device is exclusive to Prime members, and works in conjunction with the AmazonFresh grocery service. The video above was posted a short time ago to Amazon’s YouTube channel, and the product page is live. 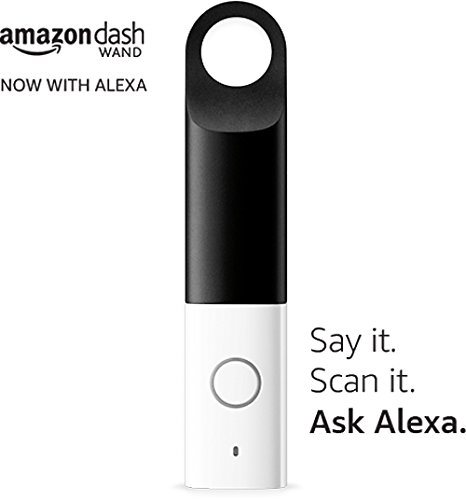 This looks to be the smallest and most inexpensive Alexa-enabled device yet, extending the virtual assistant further beyond the existing Echo smart speaker lineup. Amazon describes the device as “essentially free” because customers will get a $20 Amazon credit when they register the device.

Unlike Amazon’s other Alexa-enabled devices, the device does not support music playback, which would have been quite a trick given the size.

However, it does offer many standard Alexa features. Here’s the official list of features from the product page.

The company announced in April that Alexa now has more than 12,000 skills.

Amazon previously offered a Dash Wand without Alexa built in. That version is now listed as unavailable. Like the earlier version, the new one is magnetic so that it sticks to the fridge.

This is just the latest expansion of Amazon’s Alexa-enabled device lineup, which started with the Echo smart speaker before expanding to the Echo Dot and Echo Tap. The company unveiled a new Echo Show touch-screen device last month, and before that announced a $200 device called Echo Look with features for taking pictures of outfits and providing fashion advice.

Amazon has a big lead in the market for smart home assistants, but it is battling devices from other tech giants like Google Home and most recently Apple HomePod.

A recent forecast from eMarketer estimated that Amazon will have a 71 percent market share of all voice-enabled speakers in the U.S. this year. A recent survey from Consumer Intelligence Research Partners estimated that Amazon has sold more than 10 million Alexa-powered Echo devices since late 2014.