Amazon’s voice technology has made its way into Major League Baseball.

Earlier this month, the Seattle Mariners became the first professional sports franchise to place Amazon Echo devices inside stadium suites. At Safeco Field, fans at each of the 59 suites can now use their voice to order food, change TV channels, play music, and even have Alexa — the AI powered voice assistant built into the Echo — sing “Take Me Out To The Ballgame.”

GeekWire had a chance to test out the new technology this week before the Mariners took on the Oakland Athletics.

Fans can use Alexa for its normal capabilities — asking about the weather, playing music, providing news updates, etc. But what makes these particular Echo devices special are the Mariners-specific commands, which are activated by asking, “Alexa, ask the Mariners to…” 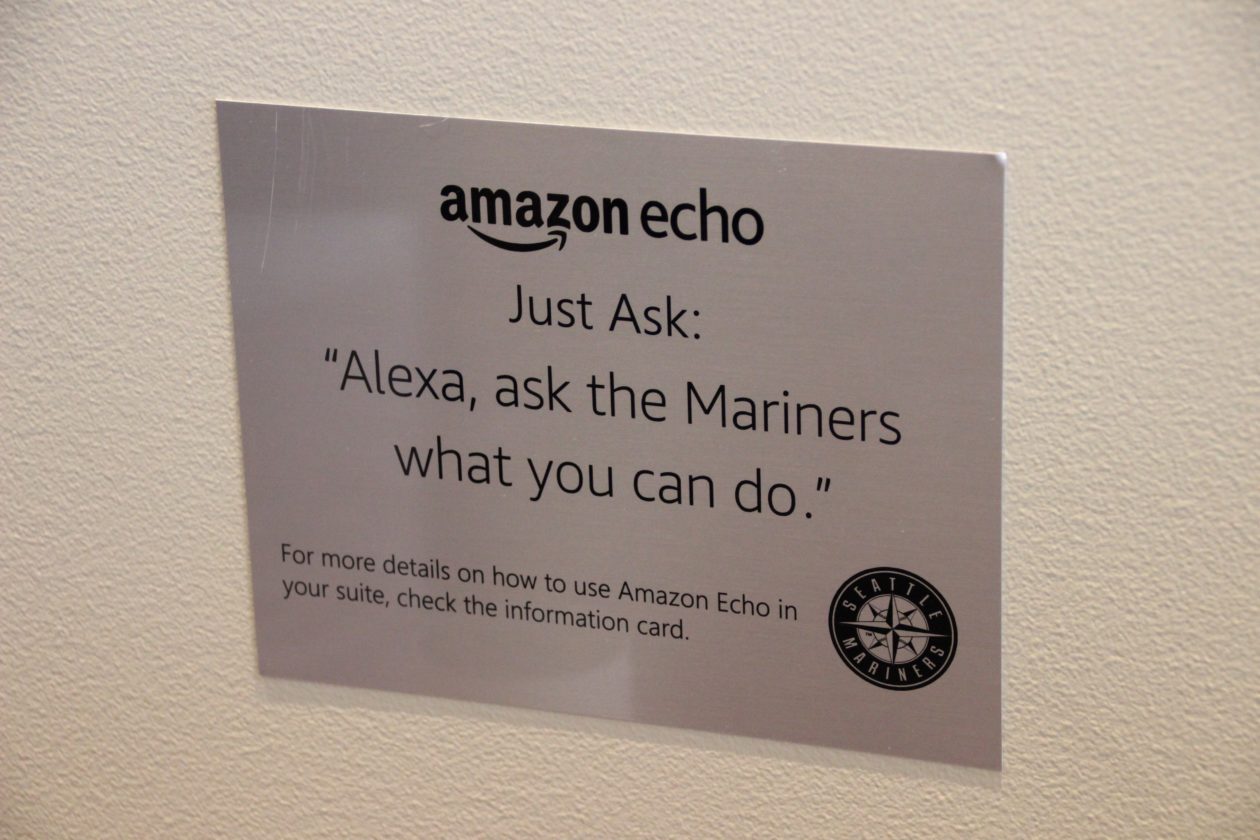 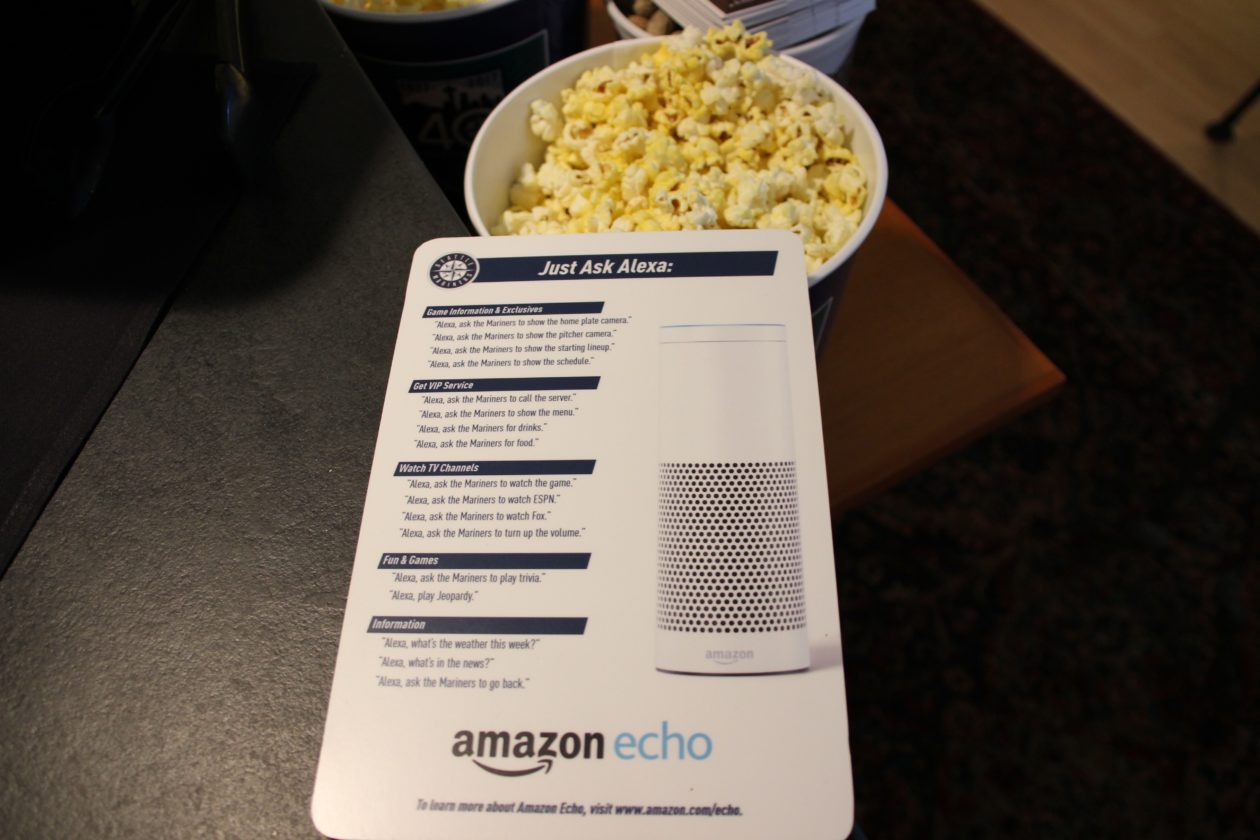 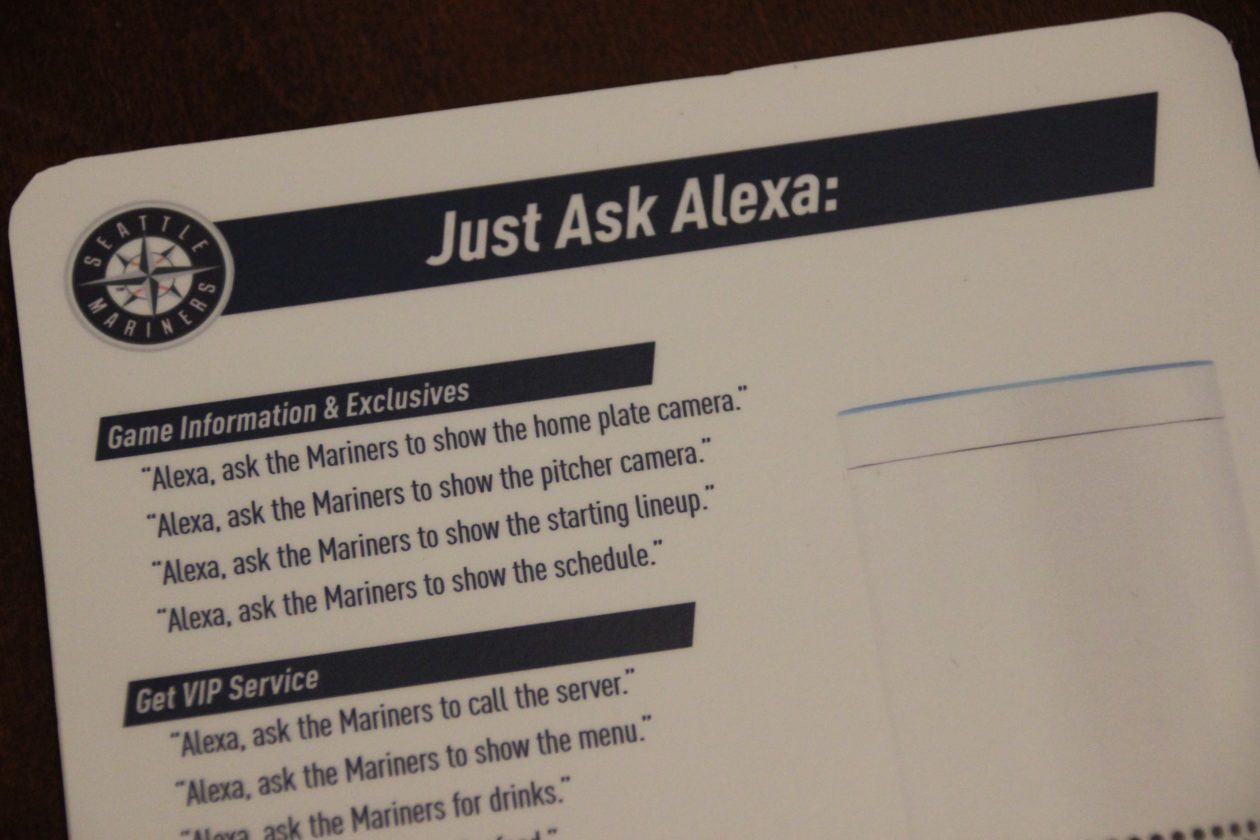 The Mariners worked with Seattle-based Amazon and third-party company FanConnect to pair Alexa voice commands with the televisions in each suite, which are a key part of the experience. It essentially turns the TVs into smart devices. 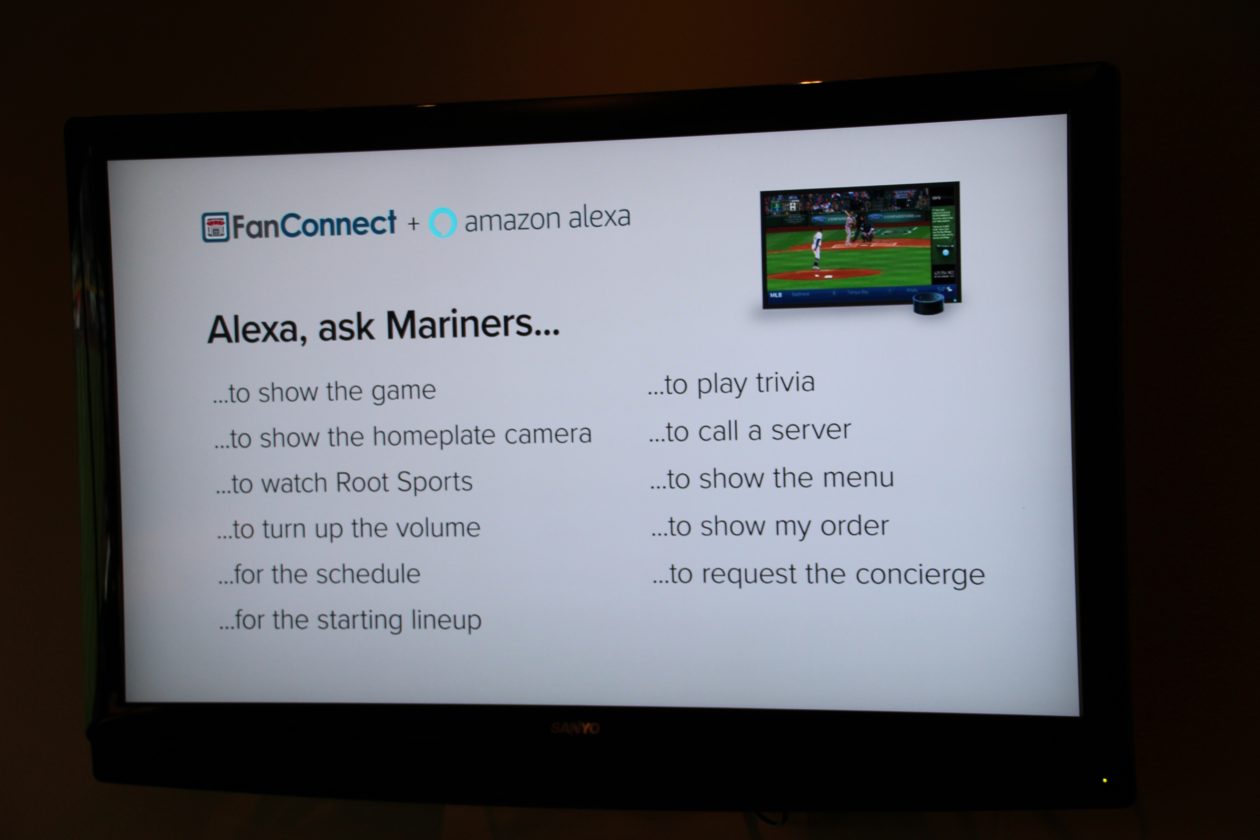 During the demo, we were able to easily change TV channels, play trivia, see the starting lineup, and much more. Suite guests can ask to see the live feed from two cameras that offer Mariners coaches and scouts a unique perspective — the Home Plate Sky Cam looks directly down at home to show how balls break as they cross the plate, while the Pitcher Cam approximates the view of the batter.

The voice technology is also integrated with Safeco Field’s order management system, so when you place an order for food, it immediately notifies stadium staff to prepare your grub. Unfortunately, there isn’t a way to order grasshoppers quite yet. 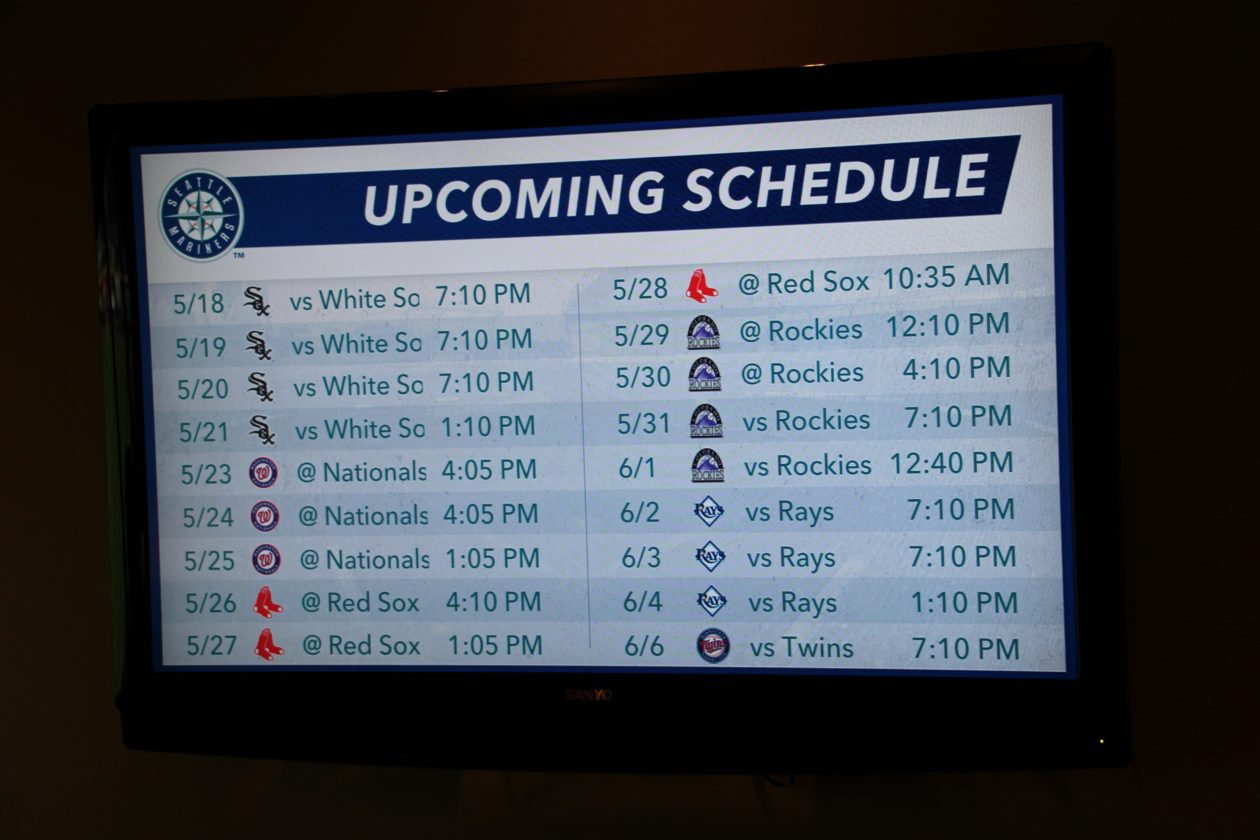 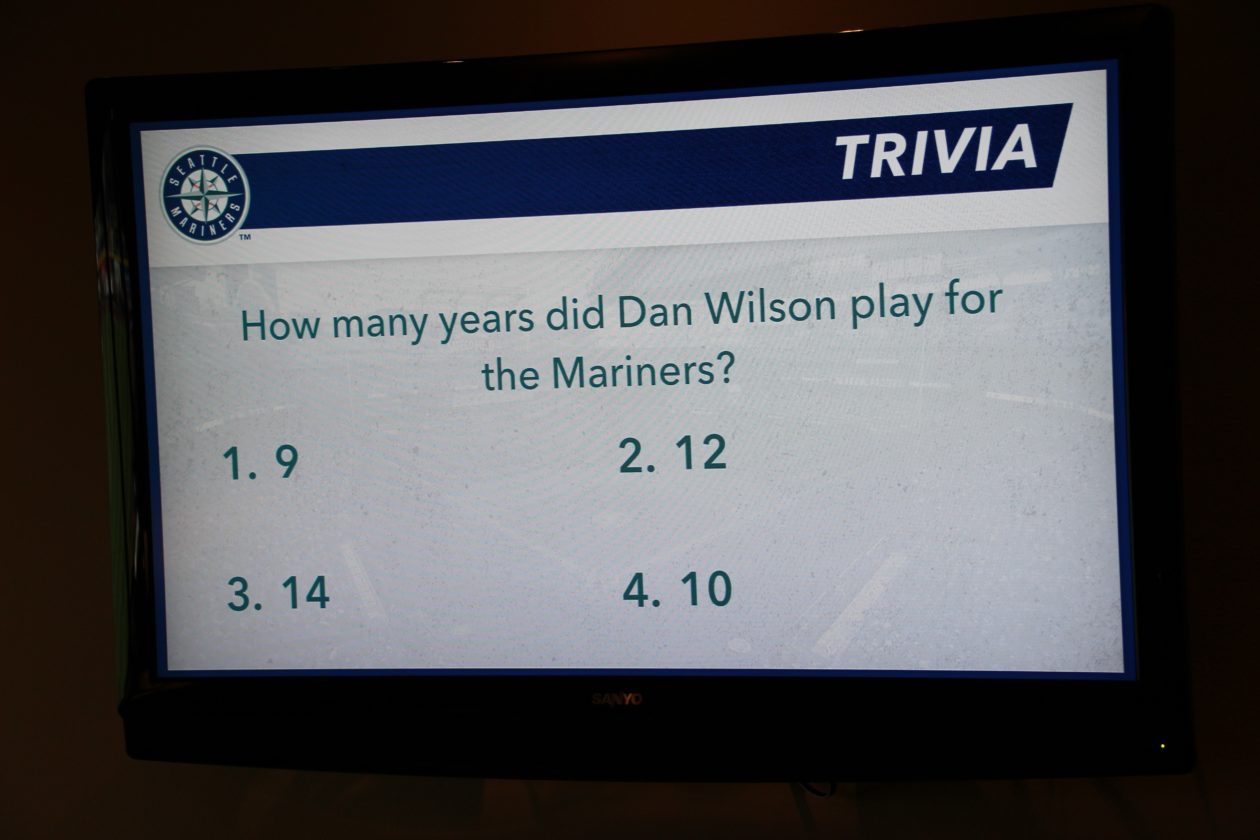 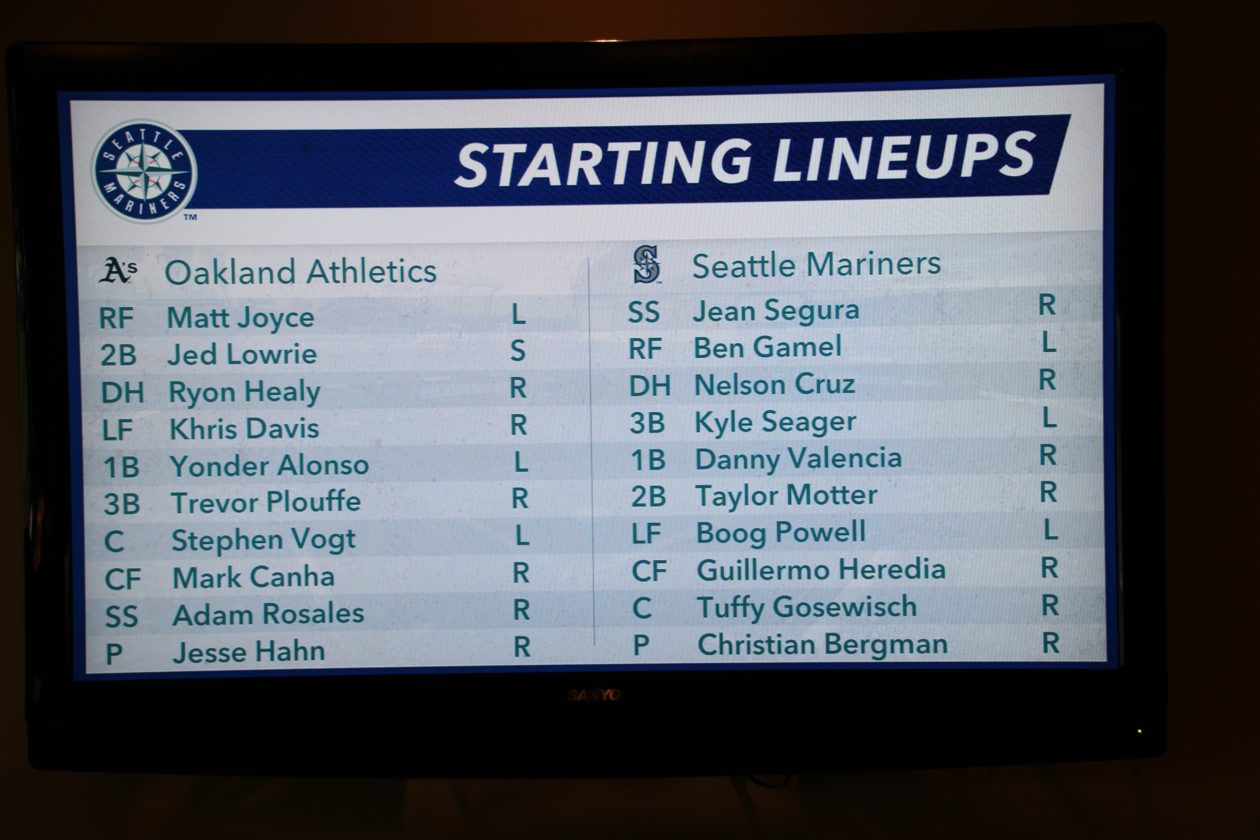 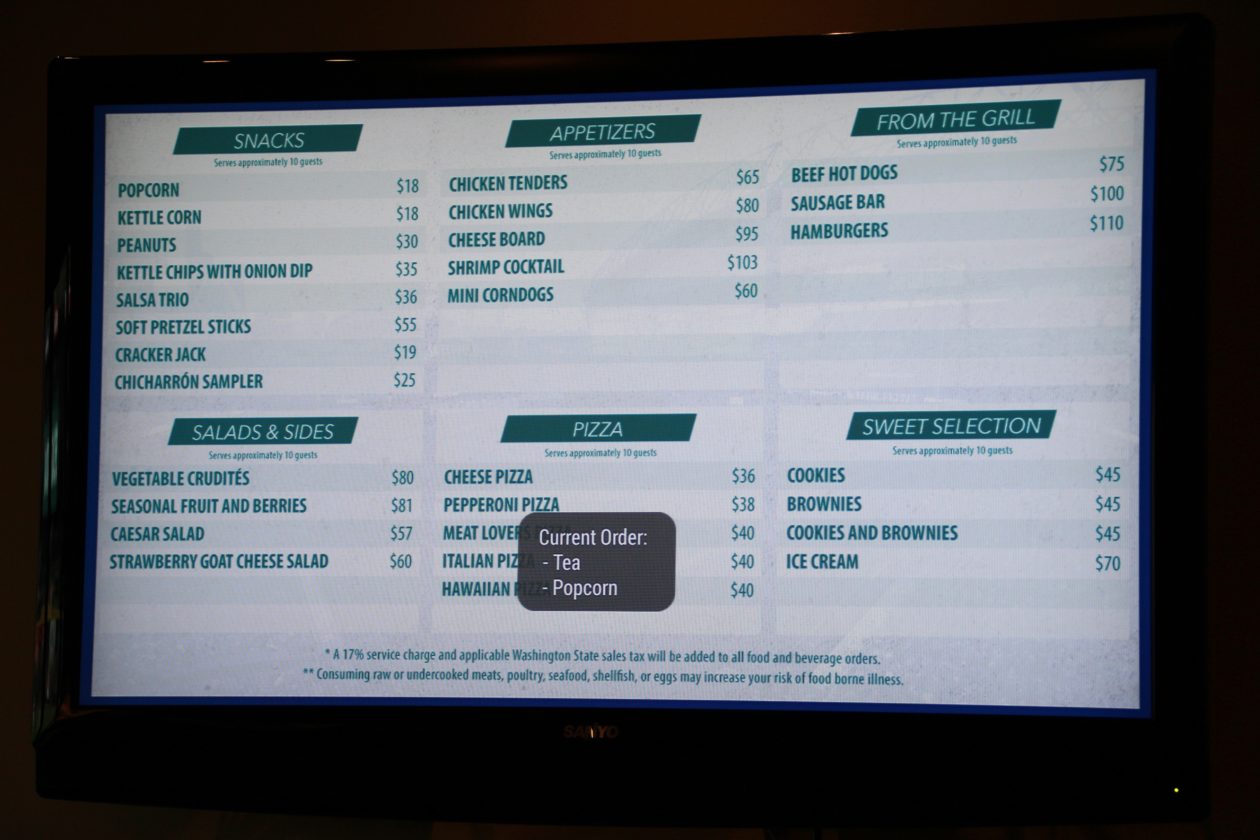 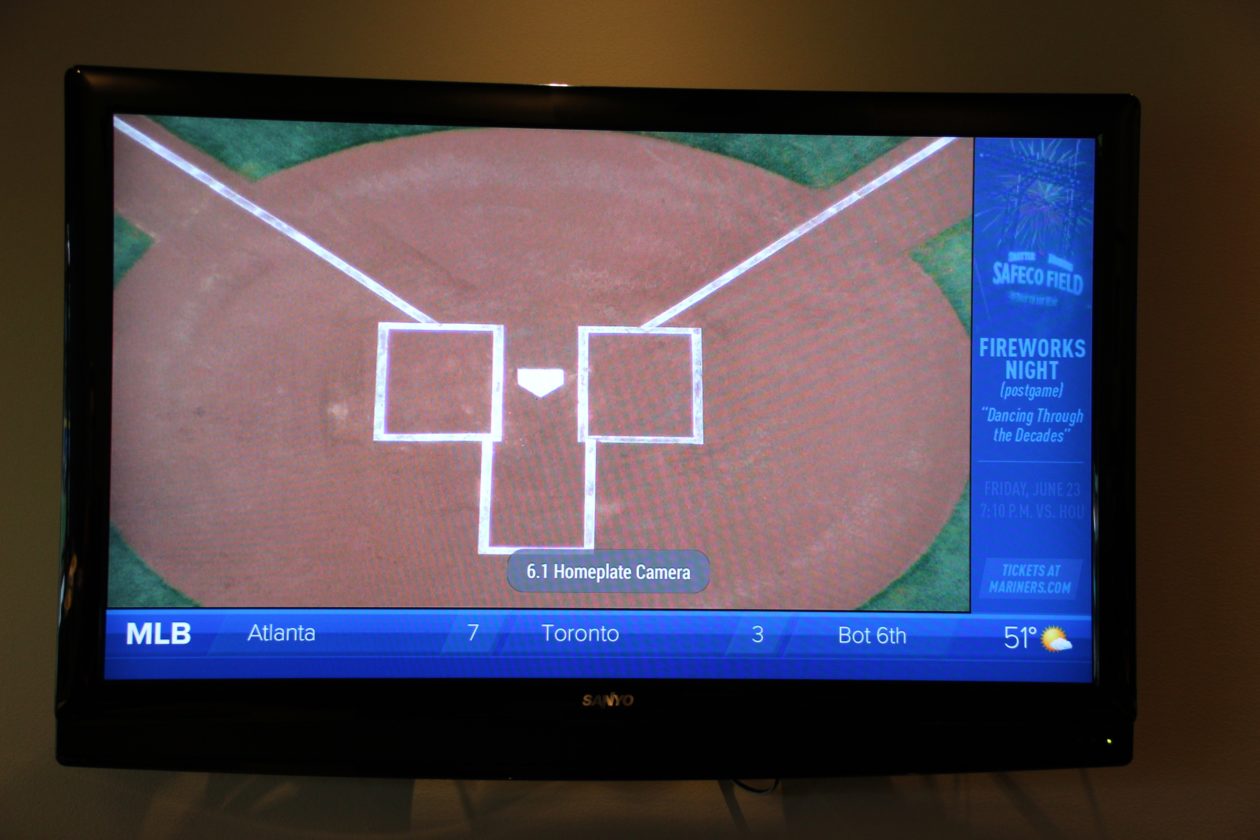 The technology was slick, but not quite perfect. Alexa sometimes didn’t understand certain basic commands, for example, which can cause a bit of frustration.

There can also be a learning curve for fans that may not be tech-savvy, though placards in each suite offer instructions for how to interact with Alexa. It can also get loud in the suite and stadium, which can make it difficult to control Alexa with your voice.

But overall, there seems to be actual value delivered to fans in suites.

“It’s been fun for fans to play with Alexa, but it is also helping us provide a better experience,” said Mariners VP of Sales Frances Traisman. 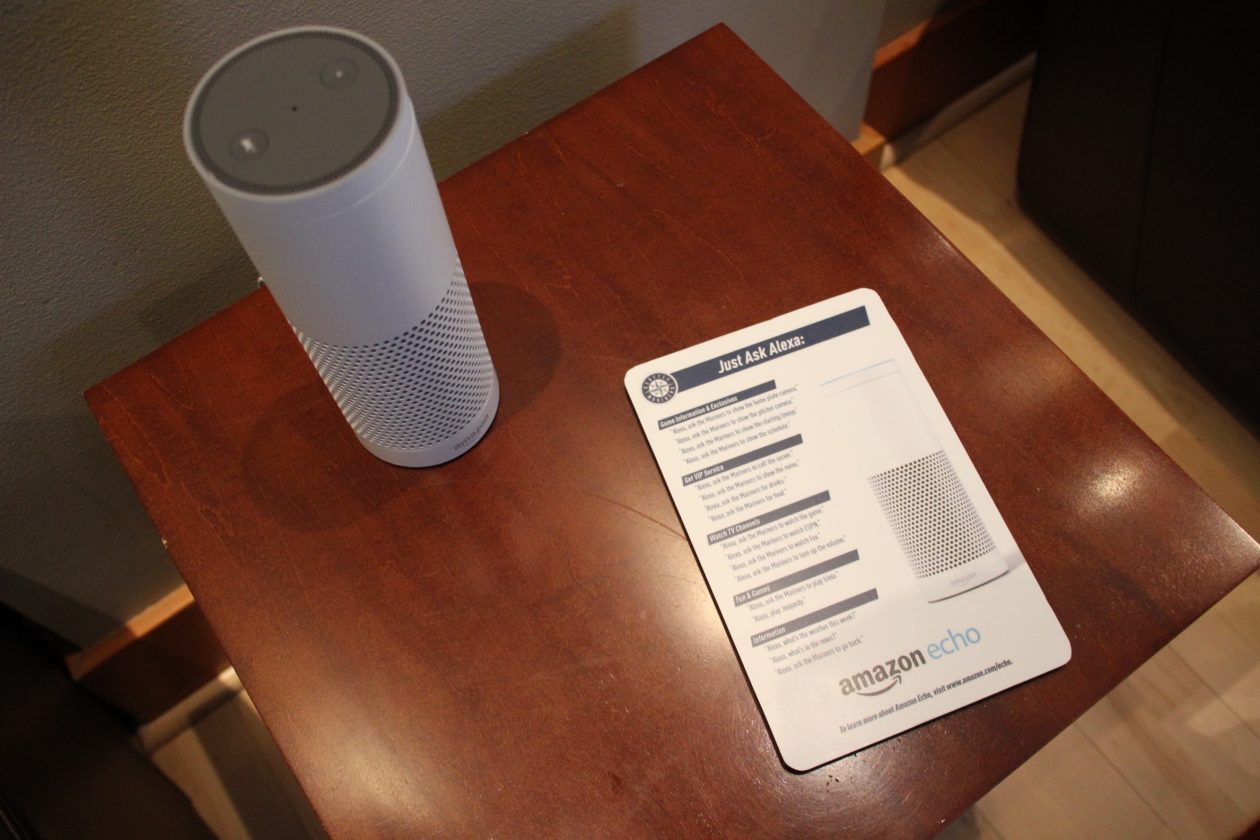 Zach Parker, head of business development for Amazon’s Alexa Smart Home unit, noted how the technology removes the need for fans to use a separate smartphone app to accomplish certain tasks.

“You can just ask,” he said. “It’s about letting the technology disappear in the room, where you don’t need a bunch of devices and gadgets. You can just talk to the things around you.”

Parker pointed out that Alexa is “democratizing,” given that anyone can use the technology, whether you’re a computer scientist or the least technical person in the room.

“Speaking to something is the most natural way to communicate,” he said.

Since Alexa is powered by cloud technology, the Mariners can tweak its functionality as it learns how fans are interacting with the Echo. Traisman said there could be possible voice technology implementations at Safeco Field outside of the suites.

“I can imagine there would be other opportunities,” she noted.

This is the latest example of the growth of voice technology. Amazon is battling other tech giants like Google, Microsoft, and Apple in the competitive voice assistant market, though it has a big lead as the first mover. A new forecast from eMarketer estimates that Amazon will have a 71 percent market share of all voice-enabled speakers in the U.S. this year.

Amazon, which unveiled a new Echo Show touch-screen device earlier this month, reported in April that Alexa now has more than 12,000 skills.

Alexa’s proliferation across both Echo devices and third-party products can be partially attributed to Amazon’s decision to open the digital brain up to developers and device manufacturers in 2015. Alexa Voice Service lets manufacturers integrate Alexa into their products. The Alexa Skills Kit encourages third-party developers to build skills for Alexa. Developers who want to add to Alexa’s abilities can write code that works with Alexa in the cloud, letting the smart assistant do the heavy lifting of understanding and deciphering spoken command.

Parker noted that numerous industries — like pro sports, for example — are now looking at voice technology and realizing its value.

“Voice is here to stay,” he said. “You can see the ways it actually improves an experience; it isn’t gimmicky. It’s something that is enhancing the experience even more than we thought was possible.”