Almost 50 years after they were fired up, rocket engines that sent NASA’s Apollo crews on the first leg of their trips to the moon have reached their final destination at last, in the spotlight at the Museum of Flight’s “Apollo” exhibit in Seattle.

During a press preview today, the museum showed off the mangled components from the Saturn V first-stage engines for two Apollo moon missions, alongside an intact 18-foot-high F-1 rocket engine on loan from NASA.

It was a bittersweet moment for David Concannon, who put together the team that found the engines in 2013 with backing from Amazon’s billionaire founder, Jeff Bezos.

“I didn’t see this until two hours ago, and I was overwhelmed,” Concannon told GeekWire today. “I still am. … It’s a really sad moment. I’m proud of what we and Jeff did, but it’s kinda like sending your son off to college.”

Concannon has been involved as an explorer in Titanic expeditions, and as a lawyer in 2004’s prize-winning flights of the privately funded SpaceShipOne rocket plane. Those were thrilling experiences, but in Concannon’s opinion, finding and recovering the F-1 engines is on an entirely different level.

That’s not just his opinion.

“My son has seen his dad do all these projects and all these expeditions,” Concannon said, “and when it was finally announced that we had found the engines that launched men to the moon, he said, ‘Congratulations, Dad. You finally did something that matters.’ … I’m proud to bring him here this morning to see what his dad was doing.”

Some of the components on display in Seattle came from F-1 engines that were fired up for Apollo 12 in 1969, just months after the history-making Apollo 11 moon landing that same year. Other components came from the engines for Apollo 16, the second-last moon mission, which was launched in 1972.

The F-1 engines weren’t meant to survive their missions. The Saturn V’s first stage dropped away less than three minutes after launch while the crew continued onward to orbit. The booster for each mission smashed into the ocean and broke apart, leaving the remains of its five engines to drift three miles down to the bottom of the sea.

Bezos was 5 years old when Apollo 11 happened. Decades later, he said the Apollo experience “was a big contributor to my passions for science, engineering and exploration,” eventually leading him to create Amazon as well as his Blue Origin space venture.

Seven years ago, the billionaire asked Concannon to come up with a plan for recovering the Apollo engines. At the time, Bezos said his objective was not just to reawaken memories for the Apollo generation, but also to inspire future generations of 5-year-olds.

“To me, that is the purest form of giving,” Concannon said.

Concannon recruited the members of the expedition team, drawing heavily on veterans from Seattle, and worked out the details for the recovery effort. When camera-equipped submersible robots identified and dredged up the engines in 2013, Bezos said the underwater scene reminded him of a “magic sculpture garden,” with some parts twisted almost beyond recognition.

The recovered artifacts went through a round of preservation at the Kansas Cosmosphere  – and then were shipped to the Museum of Flight, where they were put in storage while experts worked out how best to display them. This week marks the official coming-out party for the F-1 engines and the “Apollo” exhibition.

The engine components are arranged like puzzle pieces to show how they fit together in flight. The intact engine stands alongside the artifacts to serve as a visual guide, revealing the intricacies of 1960s-era aerospace engineering as well as the violence done by the fall into the sea.

“These engines tell a magnificent story of a time in America when everybody came together, pulled together to do something magnificent. When President Kennedy said, ‘We choose to go to the moon,’ it wasn’t actually possible, because the technology didn’t exist,” Concannon said. “If it weren’t for tens of thousands of people pulling together to make that possible, we never would have achieved it. To me, that’s the story that these beat-up, burned-up artifacts tell.” 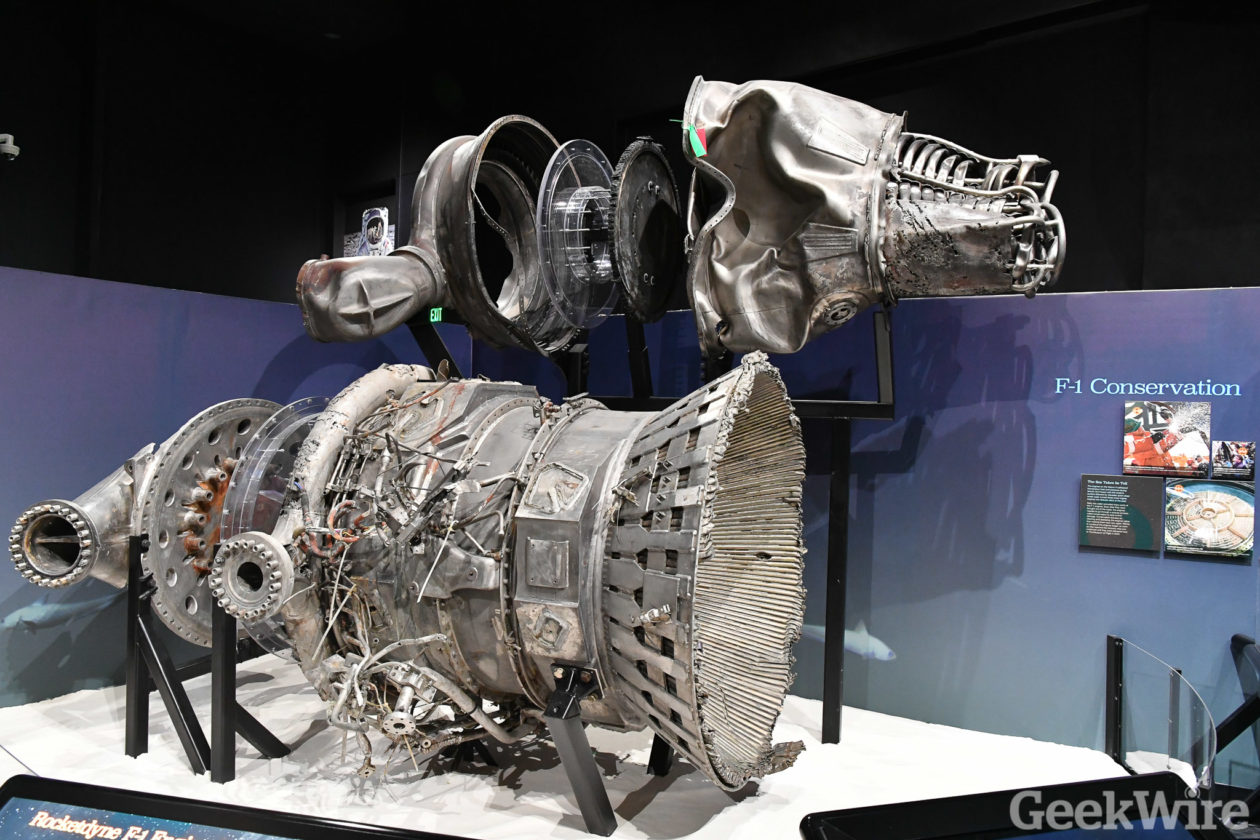 The centerpieces of the Museum of Flight’s “Apollo” exhibit are components from an Apollo 16 rocket engine (above) and an Apollo 12 engine (below), arranged in an exploded view. (GeekWire Photo / Kevin Lisota) 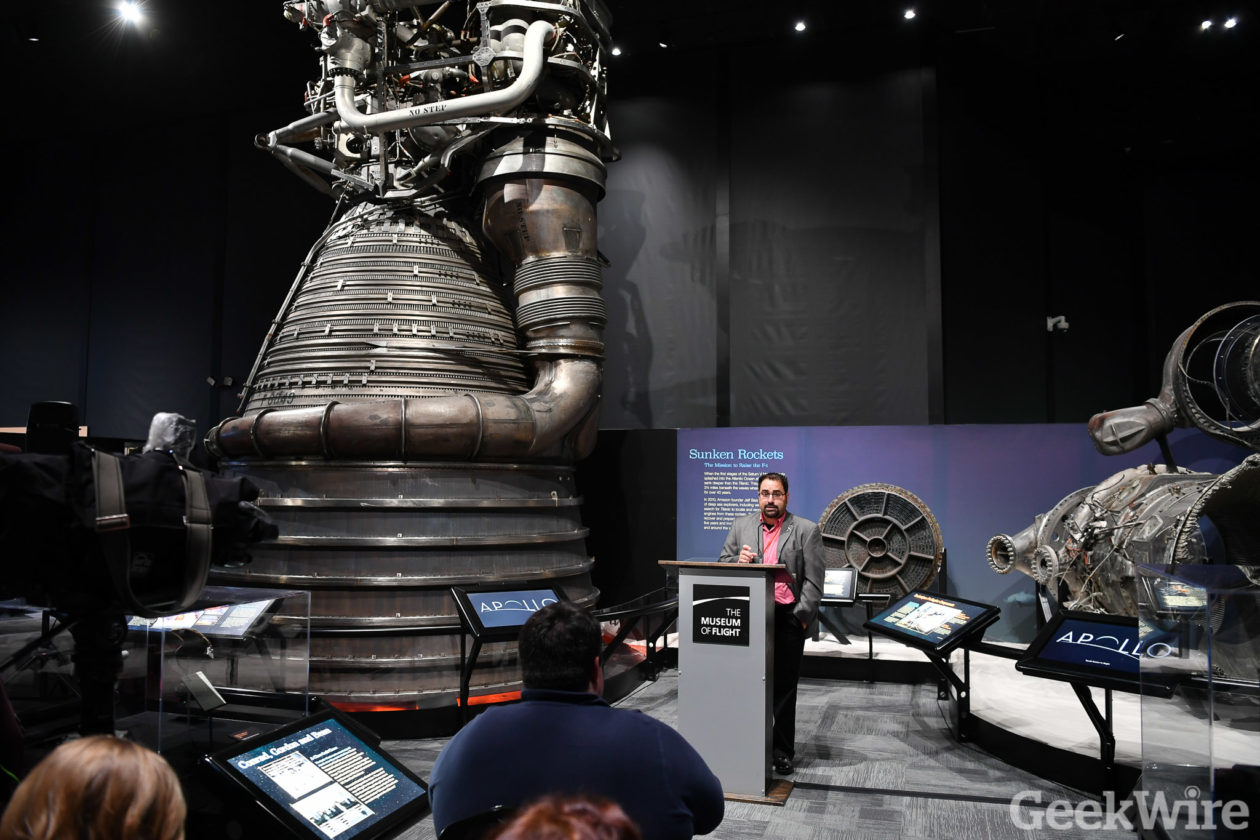 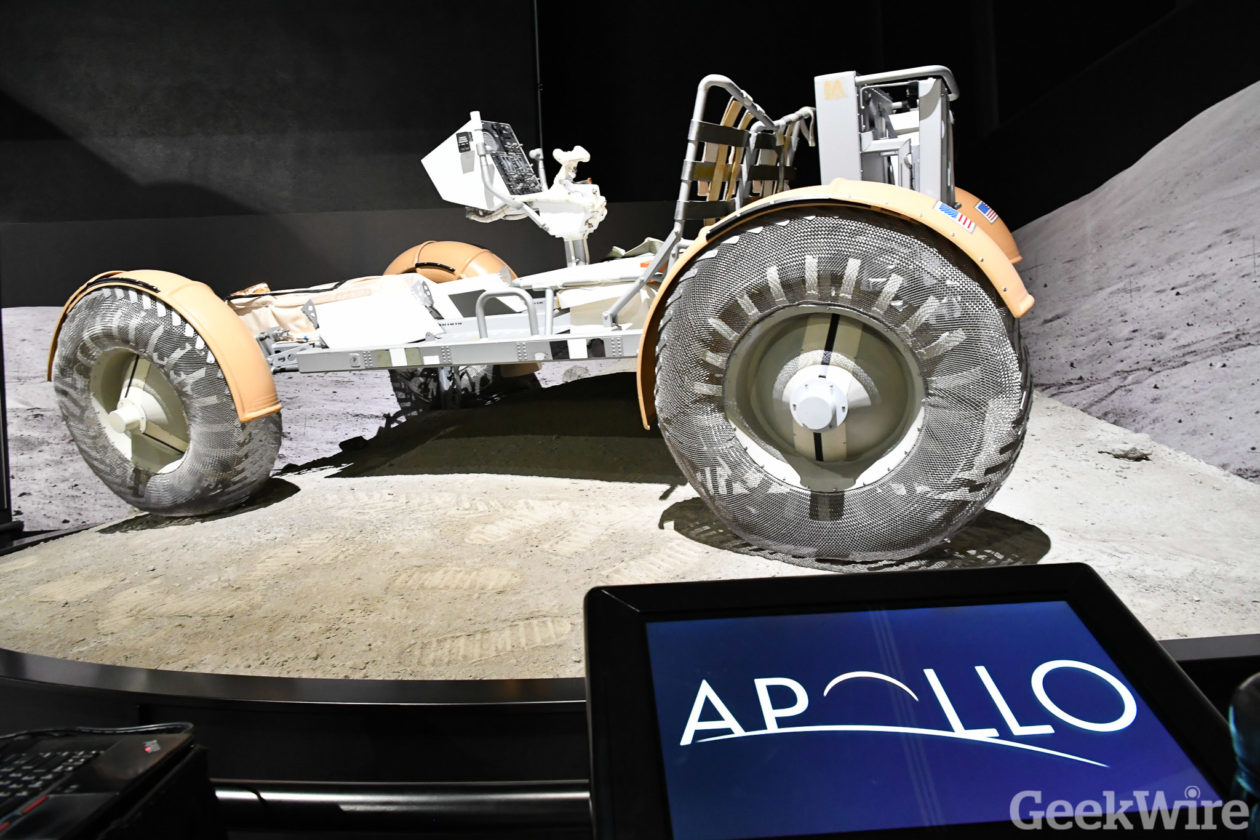 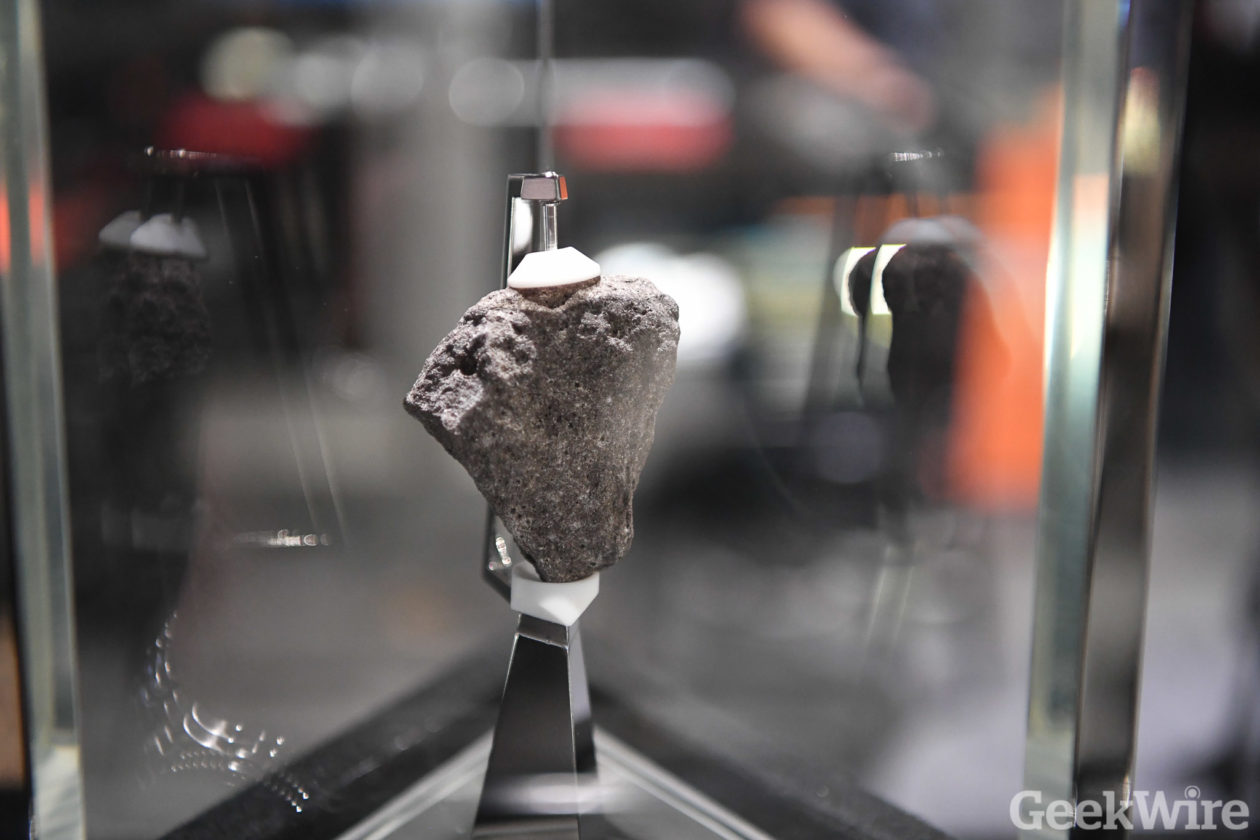 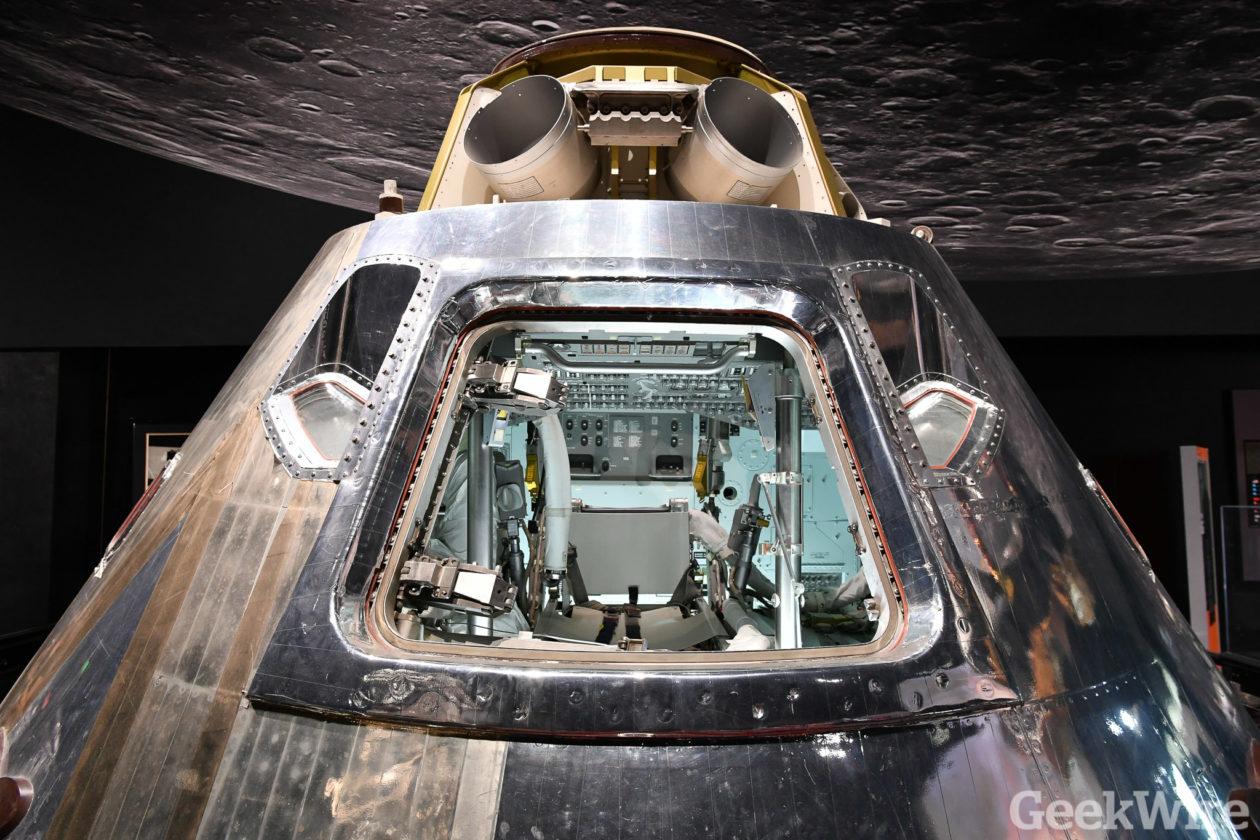 This Apollo command module never flew in space. It was used for testing and training. (Geekwire Photo / Kevin Lisota) 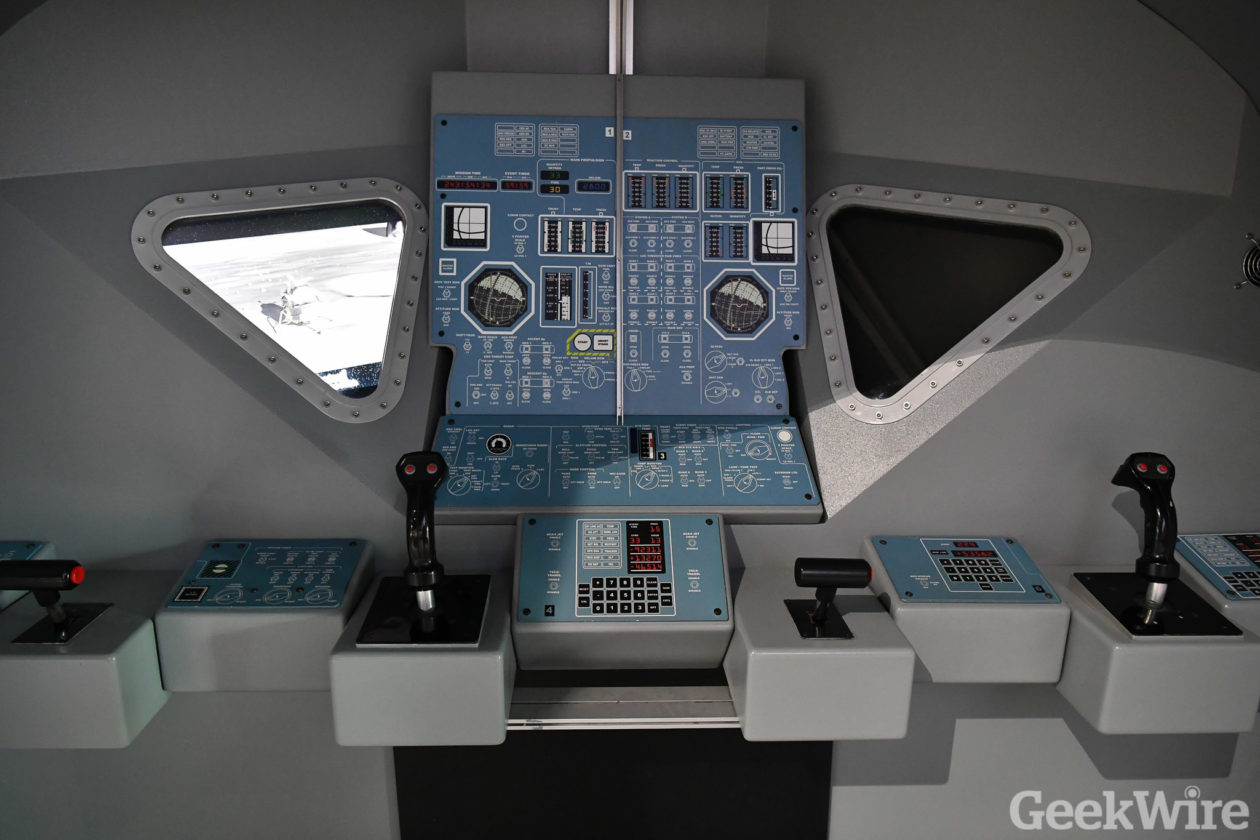 This mockup of the Apollo lunar module’s ascent stage provides a pilot’s-eye view from the inside. (GeekWire Photo / Kevin Lisota) 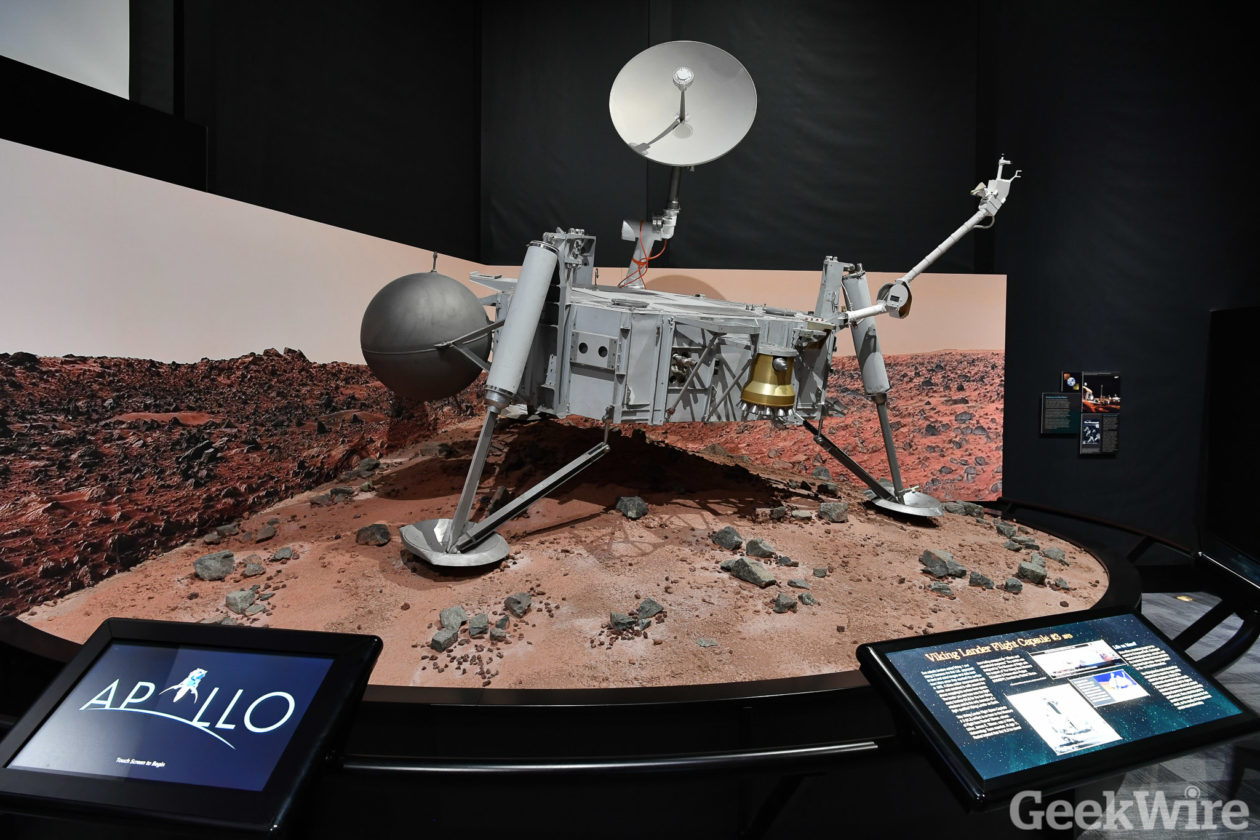 The “Apollo” exhibit includes a Viking Mars lander, which looks like the spacecraft that touched down on the Red Planet in 1976. (GeekWire Photo / Kevin Lisota) 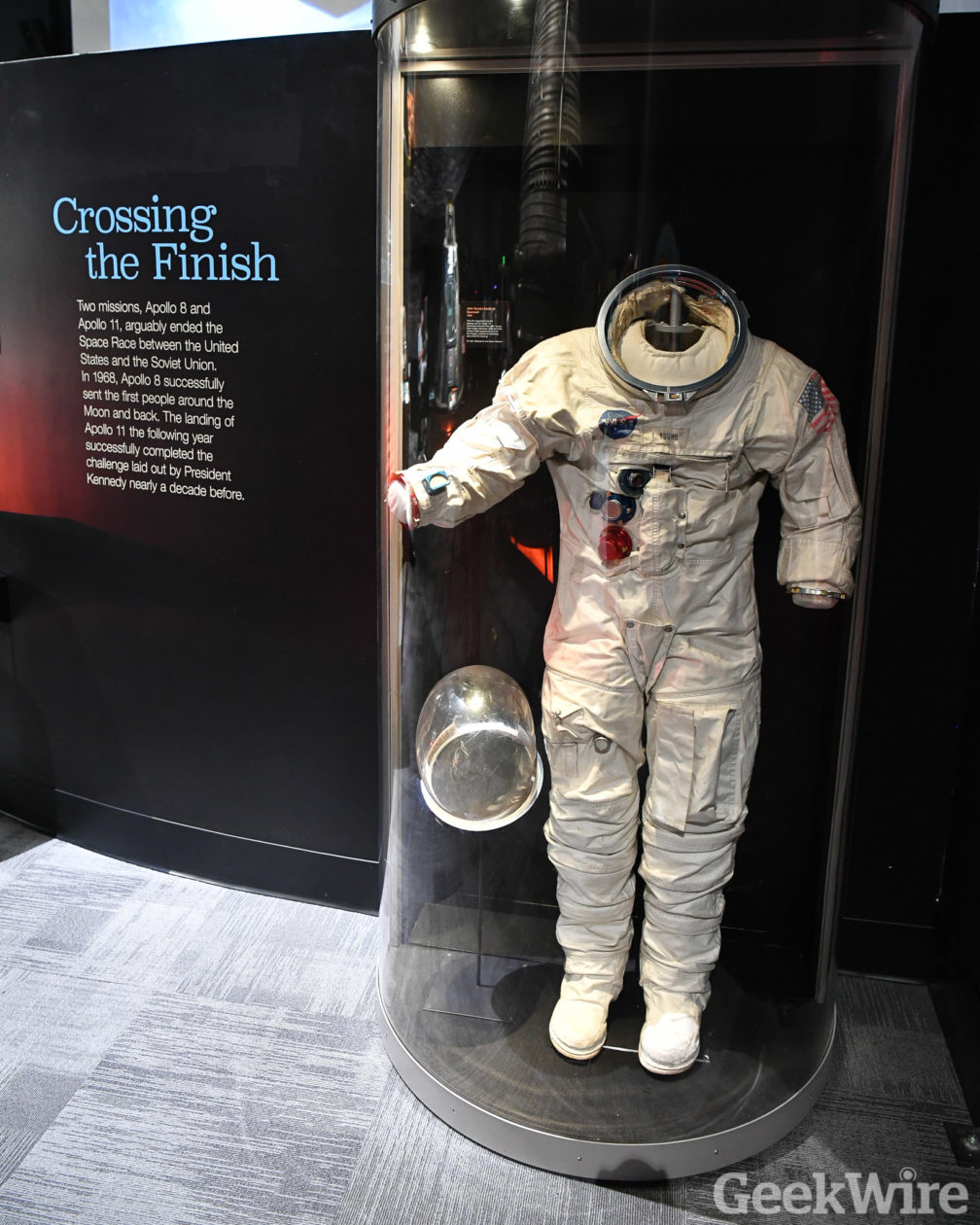 The spacesuit that NASA astronaut John Young wore during the Apollo 10 mission is on display at Museum of Flight’s “Apollo” exhibit. (GeekWire Photo / Kevin Lisota)

Doug King, the Museum of Flight’s president and CEO, marveled at the 1.5 million pounds of thrust that the F-1 engine blasted out during a launch. “This one engine is more powerful than all the aircraft in the museum put together,” he told GeekWire.

But the museum’s “Apollo” exhibit shows off much more than just the engines: Full-scale engineering models of an Apollo command module, a lunar rover and a Viking Mars lander are also on display. There’s a wealth of artifacts linked to Apollo 12 and its commander, Pete Conrad, ranging from one of the moon rocks picked up during his mission to the cuff checklist he wore during a moonwalk. (For what it’s worth, the exhibit doesn’t show the X-rated Playboy pictures that were slipped into the checklist as a joke.)

During the public opening of the exhibit, which takes place this weekend as part of the Museum of Flight’s SpaceFest activities, you can get in on a series of talks by Concannon and others who were involved in the F-1 recovery and restoration effort, and even try taking a virtual-reality moonwalk. (Check the museum’s website for the full SpaceFest 2017 schedule on Saturday and Sunday.)

Other components from Apollo 11’s F-1 rocket engines will go on display at the Smithsonian Institution’s National Air and Space Museum in Washington, D.C., under an arrangement worked out by NASA, Bezos and the museums. And Concannon said he and his colleagues identified six additional sites on the Atlantic Ocean floor where Apollo engine parts are still lying.

He hopes those resting places will remain undisturbed.

“We pretty much picked the best artifacts that would be the most well-preserved, that somebody could look at in the museum and tell the story of Apollo, plus a three-mile plunge to the bottom of the ocean, 40 years on the bottom, and all that,” he said. “I’d be happy if it was one and done … says the guy who’s been to the Titanic three times.”