Many companies haven’t felt too much pressure to upgrade to Windows 10, despite Microsoft’s aggressive marketing campaign, although more organizations plan to make the move within the next year, according to a survey of IT professionals by enterprise technology company Adaptiva.

About 59 percent of respondents said their company uses Windows 10 in some fashion. But even those who have adopted the new system aren’t using it company-wide yet. The survey reports 54 percent of companies have migrated less than 5 percent of their systems to Windows 10.

“For the most part, companies are still dipping their toes in the Windows 10 waters instead of diving in,” the company says.

Of those who don’t use Windows 10 yet, some are actively resisting the change. Approximately 41 percent of respondents are using some kind of software to block Windows 10 installation. The prompts have drawn plenty of criticism as well as several lawsuits alleging Microsoft didn’t give people a choice to decline the upgrade.

But that doesn’t mean these holdouts won’t ever take the plunge. About 64 percent of companies surveyed expect to integrate Windows 10 within the next year. Many of these companies are long overdue for some kind of upgrade, with close to 46 percent saying they haven’t done a major system update in more than two years.

“These survey results show that the anticipated surge in enterprise Windows 10 adoption is definitely on the horizon, and some organizations are expediting plans in light of the anniversary release,” said Jim Souders, chief operating officer at Adaptiva, in a statement. 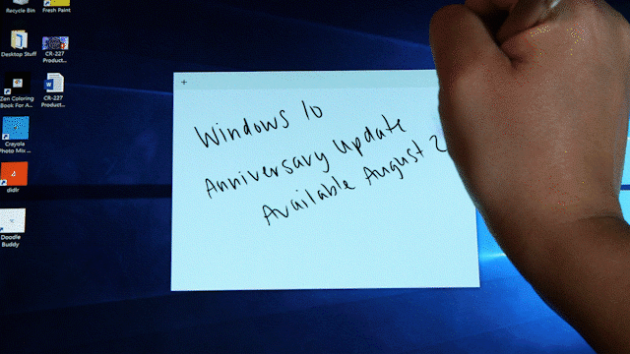 Those who haven’t upgraded to Windows 10 have a variety of concerns about the operating system. By far the most common concern was app compatibility, at 68 percent. Also on people’s minds were time commitment needed to do the upgrade (61 percent), doubts about whether their infrastructure could handle the upgrade (39 percent) and retraining staff (31 percent).

Microsoft last year set a goal of having 1 billion devices running Windows 10 within two or three years of the operating system’s release. Windows 10 is currently on more than 350 million monthly active devices but the company likely won’t hit the 1 billion number by its original goal of 2018.