Amazon said this morning that it completed its first-ever package delivery from a Prime Air drone to a customer in Cambridge, England, on Dec. 7 — a major milestone for the company in its quest to create a large network of autonomous aerial vehicles that can deliver packages in 30 minutes or less.

In this case, Amazon says, total time from order to delivery was 13 minutes.

The delivery was made as part of trial of the service in the Cambridge area, where Amazon has found a friendlier regulatory environment than in the United States for testing drones. Only two customers are part of the trial for now, the company says, but that will later expand to dozens and hundreds of people.

Amazon unveiled a video showing a kindly-looking Englishman from Cambridgeshire, Richard B., ordering an Amazon Fire TV device and a bag of Propercorn popcorn – setting off a shipment from a customized fulfillment center just over the horizon.

The company also provided a glimpse of the new design of its Prime Air drones, evolving significantly from the design the company showed a year ago.

The company announced the news this morning, via a tweet from Amazon CEO and founder Jeff Bezos, who originally unveiled the Prime Air drone plan three years ago on 60 Minutes.

Here’s what Amazon says about the delivery process and the UK trial in the video.

Moments after receiving the order, an electrically powered Amazon drone makes its way down an automated track and then rises into the sky with the customer’s package on board. These drones are autonomous. From takeoff to landing and return, they operate completely on their own, cruising quietly before 400 feet, carrying packages up to 5 pounds, and guided by GPS. Our systems are designed to find their destinations safely. Within 30 minutes of placing the order, our customer receives their package.

For this initial trial, customers can choose from the latest tech gadgets to their dog’s favorite biscuits. We will use the data gathered during this beta test and the feedback from customers to expand the private trial to more customers over time. We’re starting with two customers now, and in the coming months, we’ll offer participation to dozens of customers living within several miles of our UK facility, and then growing to hundreds more.

Customers will be able to order seven days a week, during daylight hours and depending on the weather. The two customers are getting free drone delivery as one of the perks of participating in the trial.

From the video, here are more angles showing the new drone design. 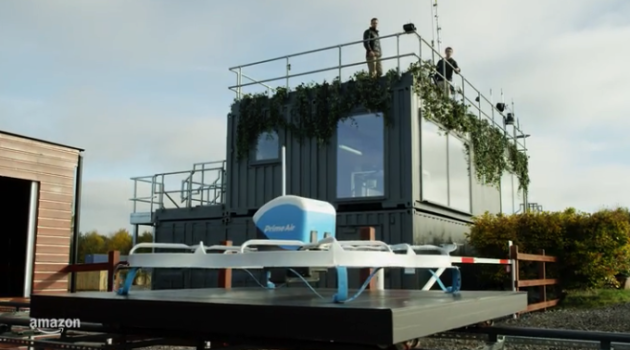 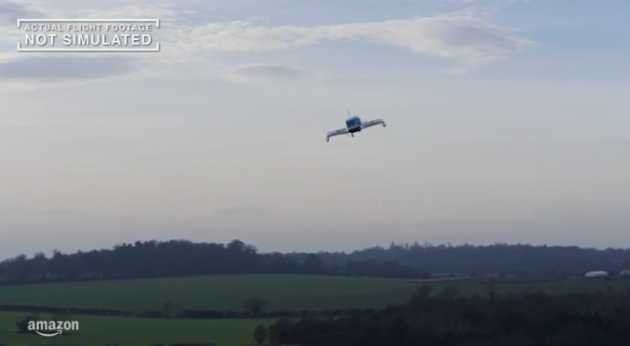 The video also provides a glimpse of the printable landing pads, with symbols, that Jeff Bezos talked about at an event in October.

The announcement continues Amazon’s tradition of making splashy unveilings during the holiday shopping season, when any extra attention for the company can have the additional benefit of helping its e-commerce sales during the most critical months of the year.

Last week, Amazon unveiled a new high-tech grocery store in downtown Seattle, called Amazon Go, even though the store won’t open to the public until early next year.