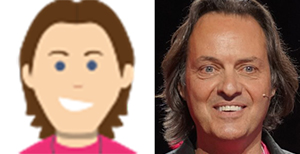 John Legere, T-Mobile’s spirited, social media-loving CEO, now has his own official Twitter emoji. He’s the second person to ever receive his own icon on Twitter, after “Cool Pope” Francis.

The hashtag #tweetjohn will activate the emoji until March 31. Legere, unsurprisingly, has been using it aggressively throughout the morning.

7/ Stay tuned!! You know I’ve got a fun way to use this emoji to make competition squirm ;) #tweetjohn

Twitter gave Legere the emoji to celebrate “three years of Un-carrier moves” according to the Bellevue-based wireless company. This morning, Legere also announced what he calls the “Wireless Customer Bill of Rights,” imploring customers to tweet their grievances with AT&T, Verizon, and Sprint.

“Since we know the carriers don’t listen – and their CEOs aren’t even on social – we’ll take the message directly to them,” said a T-Mobile spokesperson. “If customers use #TweetJohn 500,000 times, we’ll physically write their tweets – every last one of them – outside AT&T and Verizon stores across the country to make sure they get the message – in magenta chalk.”