Just a few weeks after the 2010 NFL Draft, Russell Okung sat in the Seattle Seahawks practice facility with his new teammates. Head coach Pete Carroll, who was hired a few months earlier, went around the room asking different players the same question: What is football all about?

“It’s about sacking a quarterback, slamming him down, coach,” one rookie said.

The coach went over to another rookie, looking for a different response.

Okung retold this story at GeekWire Startup Day on Friday as part of an insightful 15-minute talk about lessons the Pro Bowl offensive lineman has learned from the football field that entrepreneurs can apply at their startups. [Watch the full video of his talk below.]

“I actually believe our worlds coincide,” said the 6-foot-5, 310-pound Okung. “I believe there is a very interesting parallel between the startup world and the football world.” 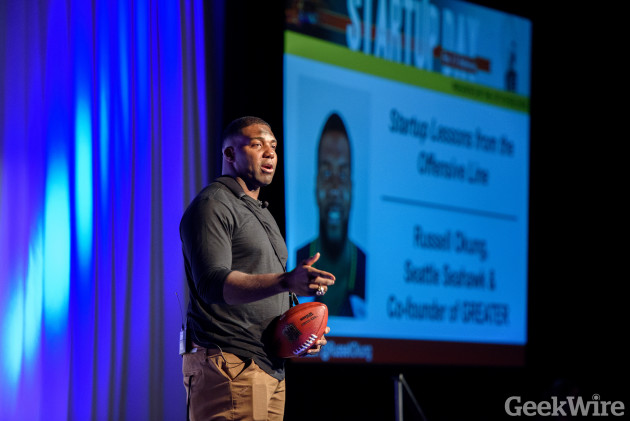 Okung walked on stage and chanted “SEA!” to which hundreds of entrepreneurs, executives, investors, and others in the Startup Day crowd responded with a rousing “HAWKS!” He talked about Carroll’s “all about the ball” message to show how the head coach instilled a philosophy within the team from day one.

“The ball would be everything, and as he held it up, we were fixated on it,” said Okung, gripping a football on stage. “We knew that games would be won and games would be lost on this ball. Everything was about this ball.”

Having a concrete philosophy — in this case, the focus on the ball — was crucial to the team’s success, Okung explained. Carroll was fired from his previous NFL head coaching jobs and would later say that his struggles were directly connected to the lack of philosophy.

Okung, who also wore his Super Bowl ring on Friday, said that startups should have a their own philosophy or set of values that is clearly understood by employees.

“Pete would allude to John Wooden, who for 16 years didn’t win a championship at UCLA,” said the 28-year-old. “But as soon as Wooden understood his philosophy, he was unbeatable; he was unstoppable. That’s how much philosophy means and how much it should mean to your company.”

Another focus for Carroll, who is now studied by psychologists that examine the way he built a winning culture in Seattle, was the “Always Compete” philosophy. That means whether you’re stretching in your stretch line or playing ping pong in the locker room, you’re always competing to get the best out of every single moment.

“Everybody should understand competition and what it is all about,” Okung told the crowd. “In competition, you want to do it better than anyone has ever done it before. That is the standard.”

Okung, an entrepreneur and startup investor off the field, also touched on the cohesiveness of his Super Bowl-winning team, one that embraced the the concept of team and camaraderie.

“It’s something that has made us unstoppable,” Okung said.

The Seahawks originally came up with moniker “LOB,” which stood for “Legion of Boom” as a label for the team’s gritty defense. But that later grew into something more meaningful and something that the entire team could relate to.

“At first, it was about four incredible men in the secondary making amazing plays,” Okung explained. “But as it grew, as it began to fester and become the bloodline of our team, it wasn’t just about the ‘Legion of Boom’ —  it was about ‘Love Our Brothers.'”

A “Love Our Brothers” philosophy is not an easy concept to engrain within a team full of NFL players, Okung noted. But the Seahawks embraced it, and it was key to the team’s dominance.

“It’s a type of love where you would do anything for one another,” said Okung, who is studying for an MBA. “It’s when you see some type of success when someone makes a big play, you’re all over them just like you made that play on your own. It’s a selfless love.

“It’s hard to be selfless, especially in our society,” Okung continued. “You guys have Instagram, Twitter, Facebook — pages directly dedicated to you. So to understand that you want to think about someone else — it’s one of the most humbling things you can possibly do.”

A team-first mentality carries over to startups, too. Okung referenced Jim Collins’ book Good to Great, and noted its description of successful founders who never talk about themselves.

“They always spoke about their team,” he said. “The people around is what made the company and what made them who they were. I think if you understand that, you are unstoppable. There’s nothing you can’t do.”