eSports, though still in its infancy, already has a massive following. Now, a Seattle startup wants to get in on the craze with a new platform that lets fans crowdfund matches between top gamers.

The company, which just graduated from Techstars Seattle, has developed an eSports engagement platform that caters to both spectators who watch live streams and the gamers themselves.

Fans can participate in crowdfunding campaigns that fund matches between top players, who can use Matcherino to get paid for their matches and interact with followers.

“When many, many thousands of fans want to see certain professionals battle against each other and are willing to chip in money to make it happen, they need a technology platform to make it as easy as possible,” Matcherino CEO Grant Farwell told GeekWire. “That is what we provide.”

The company is working within a fast-growing eSports market that will likely continue expanding. There are more than 200 million viewers and Matcherino says the average fan spends more than 20 hours a week watching streamers play and interact with other gamers online.

“To those not familiar with eSports, we usually start by explaining eSports,” Farwell said. “It’s a bit like watching pros play a sport you love. You like basketball and you watch the NBA. eSports is that for your favorite video games. Creating show-matches is akin to crowdfunding a show or a piece of content.” 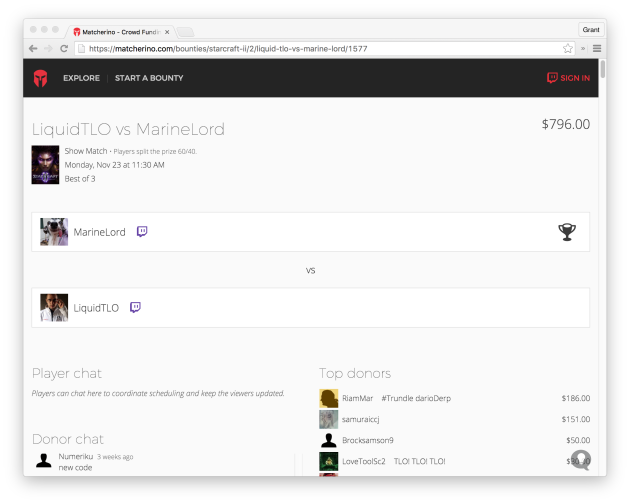 Farwell came up with the idea for the startup with CTO Mario Gutierrez when the co-founders noticed eSports participants trying to set up matches between popular game streamers.

“Hundreds of fans wanted to contribute money to make it happen and almost every step of the organizational process was a giant hurdle for the community,” Farwell explained. “We knew that we could fix this problem – and also makes streamers’ lives easier by bringing fans closer to them in a bunch of different ways.”

Simply being a matchmaker — Matcherino takes a cut of each prize pool — is not the company’s only idea. It plans to add services that give both expert and beginning streamers a way to manage and grow their audience.

“In the future we will be collaborating with brands that matter to the fans and steamers to create unique and fun experiences for the community,” Farwell added.

The 8-person company is one of the first startups from the Techstars Seattle 2015 class to raise external funding. It’s similar to another eSports-related startup in Seattle called Unikrn that raised $7 million in June. However, while Matcherino builds technology to let viewers pay to see matches, Unikrn is more focused on the wagering side of eSports with its betting platform.

Learn more about Matcherino with our Startup Spotlight.

As far as Okung’s investment, Farwell said he met the Seahawks left tackle through an introduction from Madrona Venture Group Managing Director Matt McIlwain, who has built a relationship with Okung over the past year.

Off the field, Okung is a businessman himself — quite literally. He made headlines this summer after announcing on The Players Tribune that he was firing his agent and would instead represent himself in contract talks after this season.

It is an ambitious and somewhat unprecedented move, but Okung — who graduated with a business degree at Oklahoma State and is enrolled in a University of Miami executive MBA program — said that it isn’t worth paying hefty fees to agents when athletes can handle their own deals.

I know my worth. I can look at the market and go directly to a team without an agent and tell that team my worth. And I can do so with confidence because I’ve done my research, I’ve educated myself and I’ve questioned the answers I’ve been given. And when it comes to reviewing the details of my next deal, I’ll hire an expert — a lawyer or a sports attorney who understands the dynamic of football contracts — to read the paperwork. I’ll negotiate a one-time flat fee that isn’t dependent on the size of my salary.

You see, there’s a new sort of athlete, and he’s not just an athlete. He’s a businessman and a living brand, a la Magic Johnson or LeBron James. He’s a player who represents himself because he not only understands the market and his own personal value, but has the self-assurance and financial know-how to do so, too.

Every athlete has the ability to be free of his or her agent. It all comes down to being willing to bet on yourself.

Beyond the investment, Farwell said his company plans on working with Okung and his Seahawks teammates to do crowdfunded matches for charity.

“We’re really excited to have Russell on board,” Farwell said.