Imagine pulling into a Starbucks drive-thru and seeing not just your drink order but your name on the screen — along with the suggestions of what foods you might like with your drink, automatically generated by the weather, your buying history, and the choices that others with similar preferences have made.

Coming soon to a Starbucks drive-through near you — and to your smartwatch, and possibly to each store’s cash register — are serving suggestions generated by artificial intelligence. It’s all part of the coffee giant’s plan to use AI and the cloud to drive sales and growth, as laid out in a 45-minute presentation this month at Starbucks Investor Day in Manhattan.

“I hope you’re convinced we’re continuing to set the bar for digital in brick-and-mortar,” said Matt Ryan, Starbucks chief strategy officer, after laying out the company’s technology plans. “Our ecosystem of digital propositions for the customer . . . all operate together as a platform, and it’s that platform that really separates us from the rest of the retail world, which has struggled to be more than bricks and mortar. It gives us the advantage we have moving forward.”

Seattle-based Starbucks is going strong — growing steadily and last month posting its most profitable quarter and fiscal year ever. But it wants to make its employees, customers and especially its shareholders even happier, and it’s looking to technology to help propel it forward. The push comes as longtime technology executive Kevin Johnson prepares to take over as Starbucks CEO from Howard Schultz next year, giving the company more tech experience at the top.

The company already operates 28,085 stores worldwide. It plans to add another 2,100 net new stores this fiscal year and to open 5,000 stores in China by 2021, up from just 400 in 2011 and double today’s 2,400. It added 2,042 stores last fiscal year ended Oct. 2, including its first stores in Andorra, Cambodia, Kazakhstan, Luxembourg, Slovakia, South Africa, and Trinidad and Tobago.

Starbucks isn’t ignoring back-to-basics like new drinks, new coffees and new kinds of places to consume them, such as its new Roasteries. But technology is playing a big part in the company’s plans.

The company is already using a lot of technology to help fuel rapid growth. One key move has involved shifting members of Starbucks’ rewards program for earning free drinks and food. During the past year, Starbucks has been reworking its rewards program so that it’s now based on the amount customers spend, not just on their number of visits.

“The move to spend-based allowed something incredibly important: personalization,” said Gerri Martin-Flickinger, Starbucks’ chief technology officer. The company can use spending patterns “to have people try things they wouldn’t try otherwise, or to put something quietly on sale to create incentives to desired behaviors,” she said. 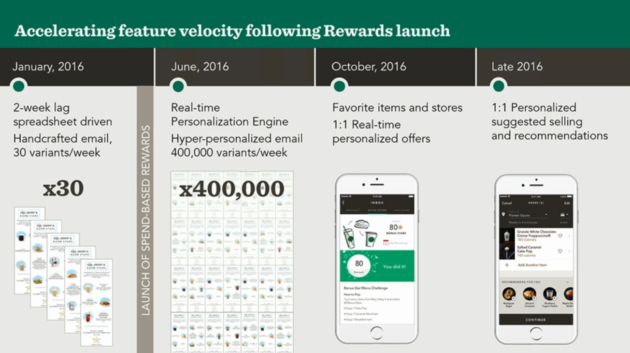 This summer, Starbucks also reworked its email program. Data had lagged by two weeks because it had to be entered into spreadsheets before workers put out about 30 variants of hand-crafted marketing emails to customers. As of June, a real-time, artificial intelligence-based personalization engine, which is tied to reward cards’ spending data, began allowing the automatic creation of 400,000 personalized variants per week. And in October, the company began offering real-time offers so highly personalized that they’re virtually unique. Response rates improved three-fold after the change.

“There are no variants; there are no pre-determined algorithms around specific offers,” Martin-Flickinger said.”It is uniquely generated based on every individual customer’s behaviors and anticipated behaviors.”

Last month saw the introduction of added personalization, she said, so that “now, if we would like you to attach a food to your favorite drink, we present to you foods you are likely to select, or that you’ve selected before. It is not a single algorithm used across the entire population; it is a data-driven AI algorithm based on your own preference and behaviors” as well as those of others, she said.

“The real-time personalization engine uses a lot of different inputs,” she continued. “Some of those are very specific to the individual, like their preferences, their buying patterns, but others are very contextual, like weather . . . or third-party data that gives us information that may be helpful to our algorithm. . . . This tends to drive up ticket and transactions.”

Before long, serving suggestions may be delivered to your wearable devices as you walk in the door. The personalization engine can “guide communications we do across all our marketing, reaching individuals wherever they are,” Ryan said. “Any screen can become a personalized screen. Think about it: we have the ability now to take personal information and marry it to what gets delivered on a drive-through screen. Or when there are other devices in our customers’ hands, for example watches, or anything that is connected and has a screen, we have the ability to customize that based on what we know about that customer.”

A bit further down the road, he said, Starbucks may provide, “with respect and with permission, customer information to the baristas in our stores . . . as we continue to create differentiation from other people who won’t have that kind of information about their customers. . . . Recommendations are a way for us to achieve what everybody else achieves with ordering suggestions. Think about what Amazon does.”

Customers currently using the mobile order and pay app — which allows selecting and paying for items before walking into a store, skipping the line and picking up the items — tend to spend less than conventional customers, but thanks to the personalization engine, “we have the opportunity to (suggest additional items), and as we do that, we think we can actually make the ticket go above what it is for the general population,” he said.

Uniformity worldwide is a goal

More prosaic steps, too, could increase revenue. Curbside delivery for mobile order and pay orders is being piloted in the U.S. , and new delivery options are being explored in China, where delivery is in very inexpensive and is a big part of the culture, the execs said.

But technology remains central. Early next year Starbucks plans to roll out “My Starbucks Barista,” an AI-based conversational ordering system that works from your smartphone.

“Our ambition,” Martin-Flickinger said, lies in “a seamless digital experience, so that you could order a latte on the tarmac as you arrive from New York in London and pick it up at the gate, without worrying about loading a different app, using a different currency, regardless of country and (store) ownership model.”

One challenge, she said, is that the rewards program has required connecting the in-store point-of-sale (POS) systems and back-office accounting systems. So has mobile order and pay, and “basically you’ve built an entire ecosystem centered around POS and back office.” But Starbucks doesn’t own the POS systems at all its stores, especially those that are licensed or franchised.

A second challenge is that there are currently 22 different mobile order and pay apps running in different countries.

To ensure a uniform customer experience worldwide, “you need a rewards program that’s consistent across the globe, and you need to think about mobile payment globally,” she said. “And mobile order and pay needs to have a unified experience, as well as personalization.”

That’s where the cloud comes in. “Some of the logic that up to this point in time has lived on the POS or lived in those back-office systems is being migrated to a cloud-agnostic solution, which will allow us to move it globally and to scale and to have elasticity and stability that we would not be able to have in our own data centers,” she said.

“The way this will work across ownership models is by getting the key pieces of data from all of those stores around the globe into the cloud,” she said. That includes store locations, hours of operation, what products are available at which store, their prices, and their inventory. Then that data will be merged into the personalization, and “suddenly you now have a global digital flywheel. Obviously it also has to connect to the stores and payment rails (systems), but by re-architecting it with this structure, we now have an easy on-ramp for other ownership-model stores.” 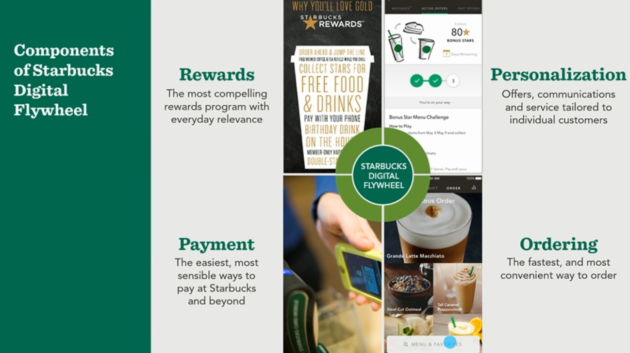 Building the global digital flywheel — putting into the cloud and making available worldwide the four key elements of rewards, personalization, ordering methods, and multiple payment options —is “really a key part of our aspiration,” Martin-Flickinger said. “Those people who learn how to do digital well and embed it in the experience for the customer will win.”

Starbucks declined to say which cloud provider it might use. Tal Saraf, who joined the company in October as senior VP of engineering and architecture and is building out a team of developers, managers and directors to develop the flywheel, is a veteran of Cisco, Amazon Web Services and Microsoft, though he didn’t work with Microsoft’s Azure cloud service.