Coffee giant Starbucks will join the growing wave of companies using artificial intelligence and chatbots to supplement human employees, planning to unveil today what it calls an “innovative conversational ordering system” for its mobile app called “My Starbucks Barista.”

The company announced the new technology at its annual investor conference today, where executives including current Starbucks CEO Howard Schultz and future CEO Kevin Johnson outlined the company’s five-year growth plan. Starbucks teased ahead to the announcement in a news release about the event.

“Today, Starbucks will unveil an innovative conversational ordering system, My Starbucks Barista, powered by groundbreaking Artificial Intelligence (AI) for the Starbucks Mobile App. Starbucks Mobile App customers will be able to place their orders via voice command or messaging interface, delivering unparalleled speed and convenience, enhancing customer loyalty and engagement and further extending the accessibility of the Starbucks app. The My Starbucks Barista feature will roll out first on iOS in limited beta in early 2017 and be made available to more iOS and Android users in subsequent releases.”

During the event, the company showed a video demo of the technology, with a customer speaking into the phone to interact with a chatbot that asked contextual follow-up questions and took a complicated order that included items such as “double upside down macchiato half decaf with room and a splash of cream in a grande cup” — all of which the voice recognition technology understood accurately in the demo.

“You didn’t think we could just order a latte, right?” said Gerri Martin-Flickinger, the company’s chief technology officer, as the audience of investors and analysts applauded following the video demo. “What you saw there is completely real.”

Update: Here’s an image gallery showing more of the My Starbucks Barista chatbot. 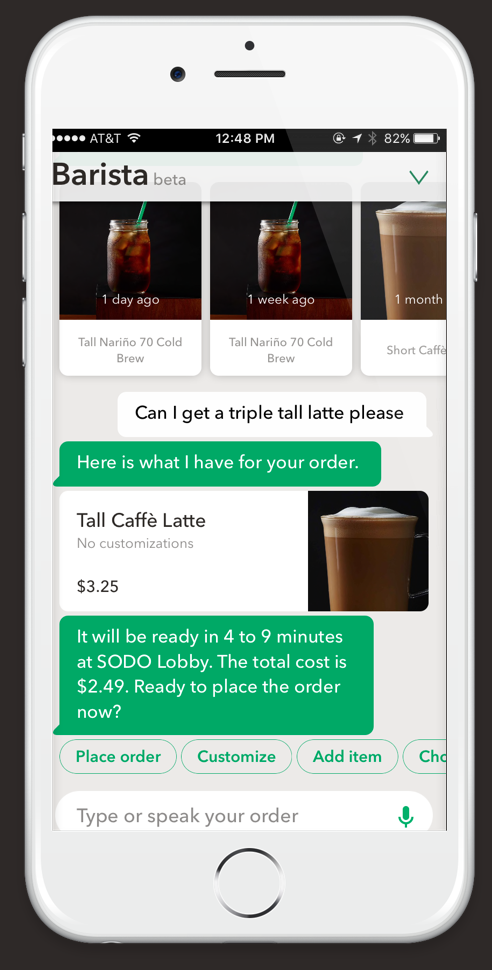 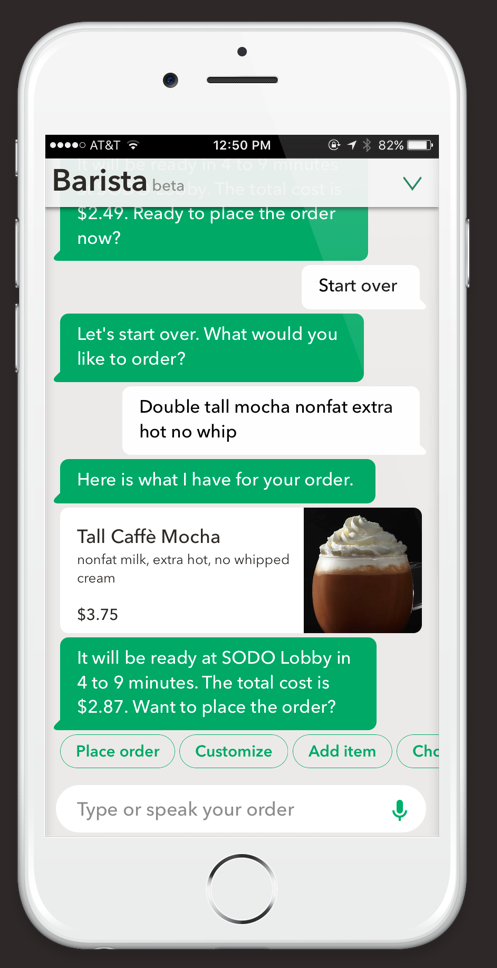 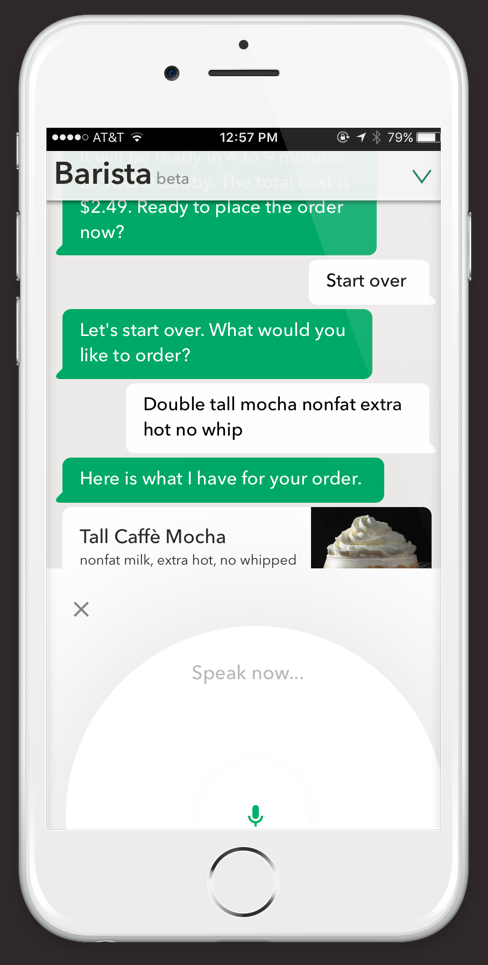 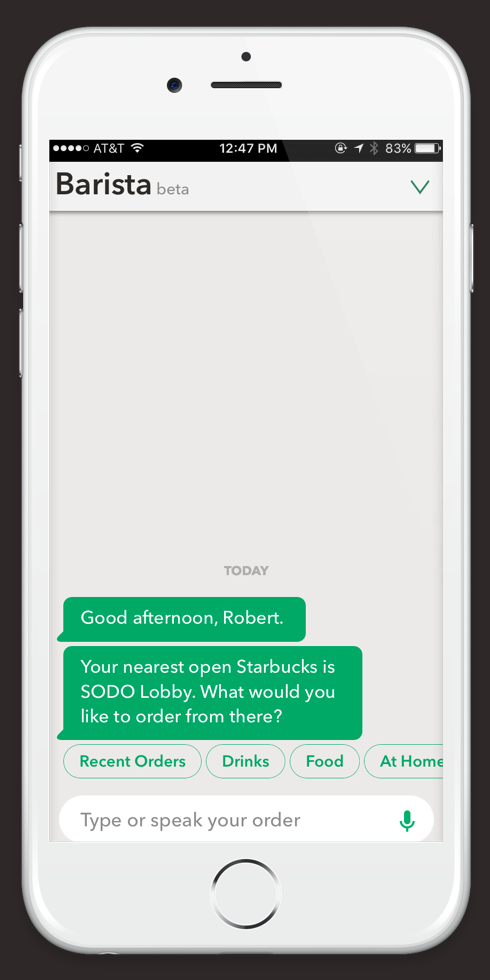 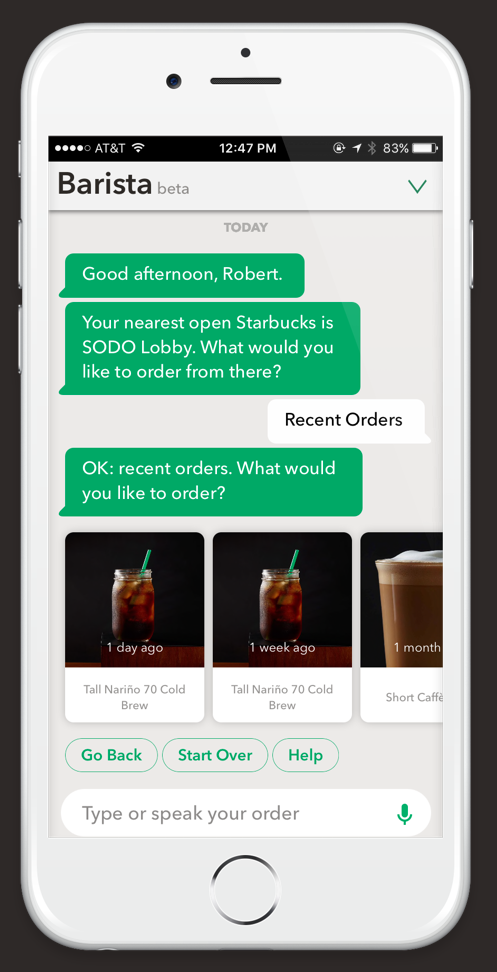 It’s the latest effort by the company to use technology to change the way customers interact with Starbucks via their phone. The company says it has 12 million Starbucks Rewards members, up 18 percent from last year, plus 8 million mobile paying customers, with a third using its Mobile Order & Pay technology, which lets customers place an order via smartphone and pick it up without waiting in line.

Johnson said during his comments that Starbucks sees an opportunity now to expand Mobile Order & Pay beyond its company-owned stores in the U.S., Canada and UK — currently representing about 40 percent of its global footprint — to the company’s licensed stores and to other markets around the world. 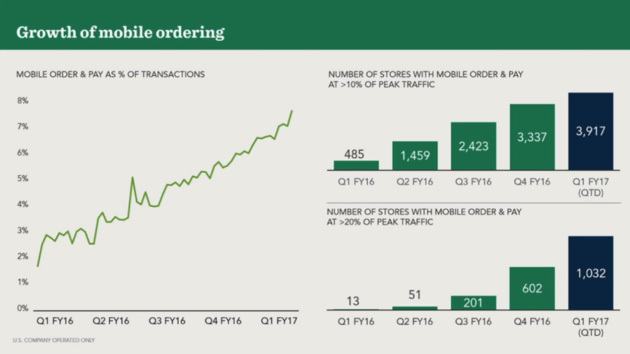 Martin-Flickinger explained how the company has been able to personalize its communications and marketing messages with customers since shifting to a new Starbucks Rewards program earlier this year. Offers and messages are “uniquely generated based on individual customers’ behaviors and anticipated behaviors,” she said.