In recent years, the clearest way to improve a sports team’s performance has been to gather more data about each player, using stats and numbers to provide a more complete picture of how the team can improve. Today, smart clothing company Sensoria and Microsoft are announcing a partnership that will let soccer teams keep better tabs on what players are doing on the pitch.

The collaboration uses Sensoria’s biometric sensors built into a set of smart soccer boots, connected to a system powered by the Microsoft Azure cloud computing platform. Sensoria, which is also based in Redmond, Wash., already has a smart sock that tracks pace, steps and other biometric data, and partnered with Renault last year to build a smart racing suit for professional racecar drivers.

The new 9-axis sensor is the first application of the Sensoria Core embeddable electronics platform. It uses an ultra-low power system on a chip embedded in a soccer boot that stores data during a match.

“The current technology available on the market is bulky and often very expensive, and the data is locked in data silos,” Sensoria CEO Davide Vigano said in a statement. “With the new Sensoria Core we’re offering sports apparel brands and teams a seamless and embeddable smart footwear and garment solution which is powerful, IoT connected and yet affordable. The Microsoft Soccer Dashboard will make it easier for coaches and scouts to equip each junior team’s player and make it easier for them to find the next Cristiano Ronaldo.”

After the final whistle blows, the collaboration with Microsoft kicks in. Teams upload their data to the Sensoria Cloud, which is powered by Azure, and then can see all the vital stats on the Microsoft Soccer Dashboard. 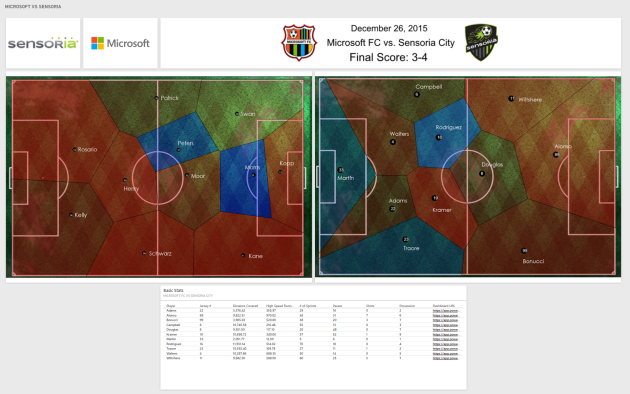 Data includes heat maps of where players are spending time on the field, where the ball is hitting their feet for passes and kicks, and other biometric measures. The dashboard even shows team-related stats, calculated by combining data from every player.

This isn’t the first connection between Microsoft and the smart-garment company; the three co-founders, CEO Vigano, Mario Esposito and Maurizio Macagno, all worked at Microsoft before forming the Sensoria. After a successful Indiegogo campaign, the company branched out from footwear to create heart rate-monitoring sports bras and running shirts.