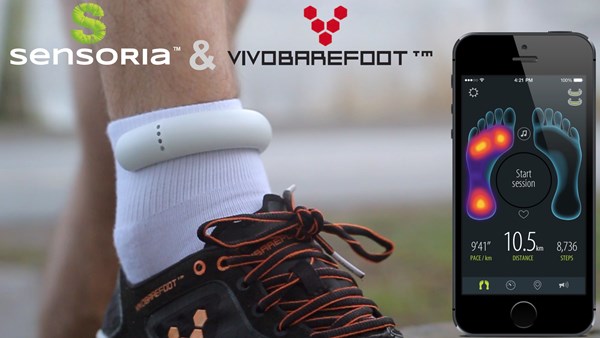 Heapsylon, the Redmond-based company behind the Sensoria brand of fitness accessories, recently announced that it landed the first retail deal for its smart socks.

The company has entered a partnership with British running brand Vivobarefoot to sell Sensoria’s socks alongside the company’s shoes. In addition, biomechanics expert and coach Lee Saxby will contribute to Sensoria’s mobile app, which will provide feedback for sock wearers.

It is a big development for Sensoria to be associated with VIVOBAREFOOT and their coach and biomechanics expert Lee Saxby,” Heapsylon CEO Davide Vigano said in a press release. “Thanks to his wisdom, Sensoria is going to help people stand, walk and run better.”

Rather than building a fitness tracker that users wear on their wrists or clip to their belt, Heapsylon, which was started by a trio of Microsoft veterans, set out to build smart socks, which use sensors embedded in the garments themselves to track how a user stands, walks and runs, and relays that information to a mobile app using a Bluetooth 4.0 connection and a special anklet.

The socks can relay real-time information to a user to help correct injury-prone running styles, and Heapsylon claims that they can provide more accurate data than traditional fitness trackers.

The company soared past its crowdfunding goal of $87,000 on IndieGoGo, earning more than $115,000 by the end of their funding campaign in August.

Heapsylon says that it plans to have the socks ready in April for delivery to people who pre-ordered, as well as for its retail partners. Users who are interested in grabbing a set of socks can do so at Sensoria’s storefront. A kit with four pairs of socks, as well as an anklet that transmits the data to a user’s smartphone costs $199, and additional pairs of socks cost $29 each.