Explaining your business concept can sometimes be a tricky endeavor in a crowded tech world full of startups looking to launch the next big idea. Drawing that concept on a cocktail napkin might seem even trickier. 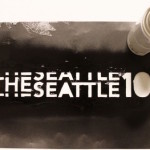 For the fifth year in a row, as part of the annual GeekWire Gala on Wednesday night, startups that are part of the Seattle 10 got creative and showed off what it is they do and how they convey it with a “napkin” sketch.

The 6-foot-square canvas banners hanging at the Museum of History and Industry showcased a broad range of business plans — and artistic talent — from companies dealing in education, virtual reality, robotics, pets and more.

Take a look at the work from this year’s class of the Seattle 10, presented by GeekWire and MOHAI.

What they do: Auth0 may not be the best known startup, or the easiest to understand. But if you ask venture capitalists for an objective take on the hottest startups in the region, this Bellevue based company — a maker of identity and authentication technologies — often rises to the top of the list.

Led by former Microsoft manager Jon Gelsey, the three-year-old startup combines existing login and identity verification options into a few lines of code that developers can quickly add to their applications. The goal? Create a “zero friction identity and access management solution for cloud-hybrid applications and APIs.”

“We built Auth0 because we were annoyed about how hard it was to integrate identity into apps,” Gelsey told us in 2014. “As identity experts, we knew it didn’t have to be that hard.”

Previously on GeekWire: Auth0 raises $15M from Trinity Ventures and others to bolster its identity platform

What they do: Let’s face it, we need more computer scientists and engineers. Coding Dojo wants to help solve that problem, operating coding bootcamps in Seattle, Dallas, Silicon Valley, Washington D.C., Chicago and LA. It offers courses in Python, Ruby and other programming languages, teaching students the basics of coding in just 14 weeks.

CEO Richard Wang, who has big ambitions for the Bellevue-based company, told GeekWire Wednesday night that 2016 has been a great year for the company.

“We really focus on the quality of our program and also student outcomes,” Wang said. “We invest a lot of energy and invest a lot of resources to really improve those elements of the business. For 2017, we want to evangelize our efforts even more to six different cities to help us really execute our mission, which is about transforming lives through programming literacy.”

Wang said Coding Dojo is looking into major metropolitan and “second-tier” cities around the country with a vision to “rebuild and upscale the workforce for America.”

What they do: When you think of technology, the trucking industry is not the first thing that comes to mind. But those big rigs on the road transport most of the goods in our homes and businesses, and making sure they get from point A to point B as seamlessly as possible is the goal of Convoy.

The Seattle startup matches truck drivers and trucking companies with shippers to coordinate freight shipments. Not the sexiest industry, but one that’s estimated at some $800 billion in the U.S.

CEO Dan Lewis, who previously served as general manager of new shopping experiences at Amazon and worked at Google and Microsoft, hopes to bring efficiency to the trucking business. “We handle everything from end-to-end, taking care of them, handling customer support, getting the truck where it needs to be at the right time,” Lewis said.

On Wednesday night, Lewis said the past year was really about figuring out the model, figuring out exactly how the business was going to work.

“We’re not done, but we’ve made a tremendous amount of progress,” Lewis said. “So 2017 is really about going big.”

What they do: M3 Biotechnology is developing advanced therapeutics to wipe out neurodegenerative diseases, such as Alzheimer’s. It’s a big idea, driven by founder and CEO Leen Kawas who earned a degree in molecular pharmacology from Washington State University in 2011.

In tests on animals, M3 said its compound has reversed both cognitive and motor deficits around neurodegenerative diseases.

M3 got a big boost earlier this year when it pulled in $10 million in funding, including cash from W Fund, Washington Research Foundation, and others.

Kawas told GeekWire Wednesday night that 2016 was a great year for M3.

“We doubled the team,” Kawas said. “We hired all the talent that we need to get our first therapy to clinical trials. We expanded our IP and we proved that our product is safe. The biggest milestone for 2017 is starting testing our therapies on Alzheimer’s patients.”

What they do: Manuel Medina is on a mission to make it easier for sales teams to do their jobs. The CEO of Outreach is well on his way to that goal, with thousands of customers and recent war chest of funding from big names in venture capital.

“Our vision is to completely transform the way sales professionals communicate by streamlining traditionally manual processes and using data to optimize the effectiveness of every sales activity,” Medina told GeekWire last year.

On Wednesday night, Medina said the thing that constantly astounds him is how fast the company has grown.

“We started with four founders at the end of 2014,” Medina said. “At the beginning of 2015, there we six of us. We’re 125 people right now and we’re not done hiring. The growth has been amazing, and I think a lot of that has to do with not only the culture we have built in the company and the people that we’re able to attract, but the people that they are able to attract.”

Check out muralist Guillaume Wiatr during the process of making the Outreach napkin:

“With virtual reality video, people will tell new kinds of stories and it will require unique technology,” Key told us last year.

A veteran in the Seattle startup ranks, Key previously co-founding online travel upstart Buuteeq, which sold to Priceline Group in 2014.

What they do: Poppy founder Avni Patel Thompson agrees that it takes a village to raise a child.

But with careers and education taking parents away from home, families need access to a trusted community. That’s where Poppy steps in, which is operating a marketplace to help parents screen and find babysitters and nannies.

Thompson said Wednesday that the past year has been “a crazy ride” as they started by doing Y Combinator down in Silicon Valley. She need the experience was “kind of a blur” but was amazing in that it allowed Poppy to grow into a larger-sized company.

By getting the team going and raising the money it needed Poppy is now excited to be headed into 2017.

“We know that we do something really well, and it’s something that people really value,” Thompson said. “So now it’s really getting out there and saying, ‘How do we scale this? How do we get this bigger and out further?'”

What they do: A lot of people laughed when venture capitalist Greg Gottesman started Rover.com at a Startup Weekend event, noting that an online pet sitting service was not a legitimate business. Well, Rover is the one laughing now, as the company has emerged as an unexepected giant in the online pet sitting marketplace.

Just last month, Rover reeled in $40 million in fresh funding, and CEO Aaron Easterly said it was on the path to an IPO.

Founded in 2011, Rover has now raised $91.5 million and the 170-person company continues to grow its platform, which now helps 65,000 pet sitters across 10,000 U.S. cities book more than one million services per quarter. In August, the company said that during the first half of this year, it surpassed an annual run rate of $100 million in gross billings.

What they do: Usermind is not the easiest concept to understand, and even the company’s marketing team has challenges explaining it to family and friends. But the company is solving a big need for enterprises, helping them integrate business functions and unify data across teams.

“I wanted to see if I could take a passionate idea I had and build a great company from scratch,” CEO Michel Feaster told GeekWire shortly after founding Usermind in 2013.

Feaster likens her enterprise software company to an orchestra conductor who manages different musical instruments and is required to have them all playing together in harmony. Those instruments, in this example, are analogous to the various standalone enterprise applications a given company uses — along with the finance, sales, marketing employees — that help serve customers in today’s digital world.

Originally founded within the University of Washington’s electrical engineering and computer science departments, the year-old company is just emerging from stealth mode.

“WiBotic is creating the infrastructure for robots to charge whenever and wherever— so companies can focus on robot tasks rather than keeping their robots charged,” WiBotic CEO and co-founder Ben Waters says. “Enabling better access to power and autonomous charging opens up a whole new world of possibilities for robots.”

Previously on GeekWire: This University of Washington spin-out can charge robots and drones wirelessly