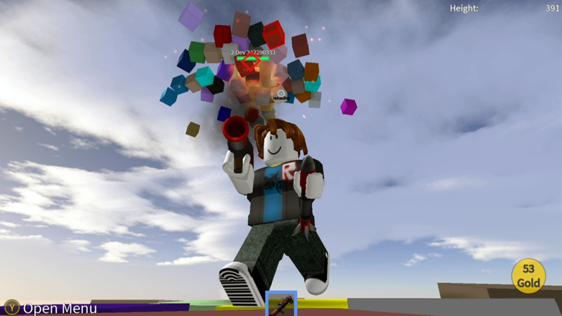 There are a ton of video games available for the Xbox One, from AAA shoot-em-ups like Halo to titles that are more of an acquired taste like D4. But even the most indie game designer still has to dedicate hours of time and resources to building and testing a game before offering it on the Xbox.

Starting today, Roblox aiming to changing that. The user-generated gaming platform is bringing its app to the Xbox One, meaning that anyone can create a game to play on Microsoft’s latest console.

Roblox, based in San Mateo, Calif., has been around for ten years and allows people to build free games with a simple computer program. Games created with Roblox range from a surprisingly engaging bird simulator to multiplayer first-person shooters. Each game runs in the cloud, meaning that games can run on anything from a Mac or PC to an iPhone or Android tablet.

“We’re really building, at the highest level, the future of entertainment,” Roblox CEO David Baszucki said. “And we’re involved in the convergence of social communication and storytelling and we’re doing it in immersive, 3D, social environment.”

“What we primarily need in Roblox games is character control, camera control and very straightforward tool, device and weapon use,” Baszucki said. “And many Roblox games follow that consistent paradigm. So they map really well to an Xbox controller.”

Creators aren’t the only ones who benefit from Roblox’s appearance on the Xbox One; the platform also allows players to play the same games across all their devices. And since they’re all hosted in the cloud, save data and other information carries over across all platforms. That means you could start a multiplayer race on your phone, then play the next track on your Xbox when you get home.

While the graphics aren’t quite pushing the envelope the way games from major studios may be, that hasn’t stopped Minecraft from taking off. And with 15 million players gaming with Roblox each month, the team seems to have found a successful platform.