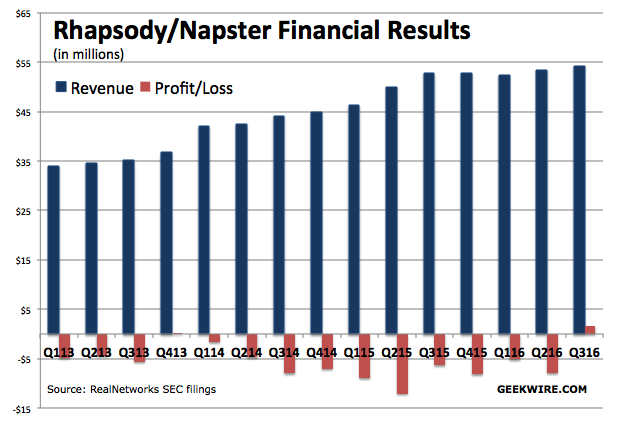 Seattle-based Rhapsody International, which operates the Napster music service, posted a profit of more than $1.6 million in the third quarter on record revenue of more than $54 million, several months after making an undisclosed number of job cuts to streamline its operations. 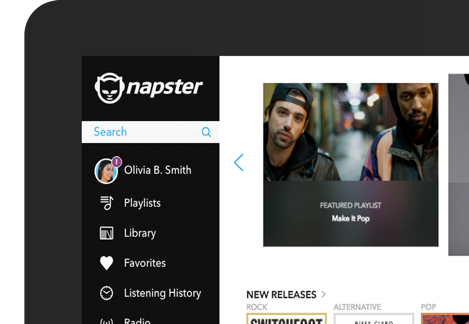 The surprise profit was spotted by GeekWire in a footnote to a regulatory filing by RealNetworks, which owns a 42 percent stake in Rhapsody. It’s the first significant profit for the music service since the company spun out of RealNetworks as a standalone company more than six years ago.

The financial result suggests that Napster could have further staying power in the face of intense competition from Spotify, Apple Music, Amazon and others in the subscription music market.

Rhapsody, which rebranded itself as Napster in the U.S. earlier this year, is not publicly traded and doesn’t otherwise report its financial results publicly. A Rhapsody/Napster representative declined to comment when asked what caused the profit or whether the music service expects to remain profitable in the future.

Mike Davis, who was named Rhapsody CEO in April, acknowledged in June that the company would be making cutbacks. “As part of our plan to better position Rhapsody/Napster for long-term profitability and accelerated growth in a competitive global market, we have a new, streamlined structure for the company that unfortunately impacts a number of positions across our global offices,” he said in a statement to Billboard magazine at the time.

If the company can maintain its profitability, it would be a major turnaround. Rhapsody posted a record $35.5 million annual loss in 2015, on revenues of $202 million.

At the time of the rebranding in June, the company reported 3.5 million subscribers. That compares to 17 million paid subscribers for Apple Music and 40 million for Spotify. Amazon jumped into the music subscription business last month with the launch of its Amazon Music Unlimited service.

Napster has been best known in the U.S. as the pioneering and highly controversial music trading service that shut down under court order in 2001, before the brand was reborn as a paid music subscription service. Rhapsody is the granddaddy of subscription music services, dating back 15 years to the early days of digital music. Rhapsody acquired the Napster brand from Best Buy in 2011.