Previously, Davis worked as a TPG growth advisor and consultant for the Gores Group. He’s served as CEO for several companies, including Gavin De Becker & Associates and Alliance Entertainment.

“Napster changed the way we enjoy music forever and we are now seeing how subscription music — a concept Rhapsody pioneered — is emerging as the future of music,” Davis said in a press release. “I look forward to building on Rhapsody’s success and making it easier for people to enjoy the music they love.”

Davis joins Rhapsody International as it doubles down on growing the subscriber base of its streaming services and introducing new products. Over the past six months, the company says it has has been in “rapid development” working to improve the subscriber experience and introduce new features such as Rhapsody KIDS and the Listener Network.

These new offerings are part of Rhapsody International’s continued efforts to compete with other music streaming services, like new kid on the block, Spotify. Rhapsody reported subscriber growth of 45 percent in 2015, approaching 3.5 million paying customers. However, that growth came at a price: the company also disclosed a record $35.5 million net loss, despite growing its revenue 16 percent for the year. 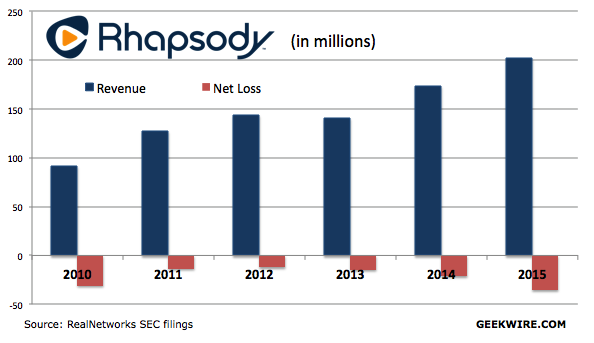 Seattle-based RealNetworks, which spun off Rhapsody in 2010, still owns a minority stake in the business. Rhapsody isn’t the only music streaming service struggling to turn a profit on subscriptions. Despite its popularity, Spotify continues to grow its losses as it tries to keep subscription costs down.

Rhapsody’s streaming service predates Spotify by many years and costs between $4.99 and $9.99 per month. With Davis at the helm, Rhapsody hopes to develop new products and revenue streams. “I am thrilled to join Rhapsody at such a dynamic time for both the company and the music industry,” he said.