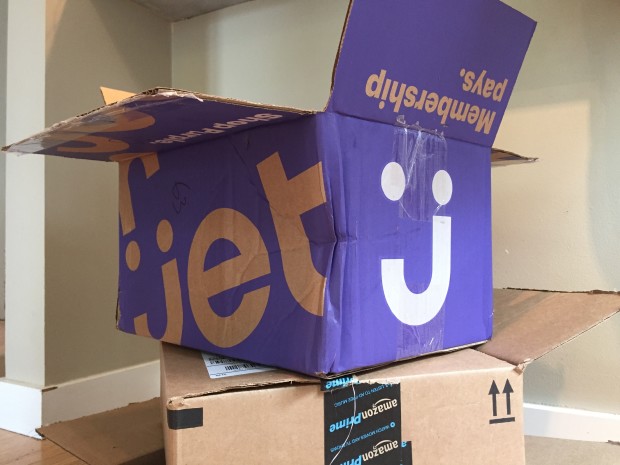 Two of Amazon’s biggest online shopping competitors, Walmart and Jet.com, may be looking to team up.

The Wall Street Journal reports Walmart is in talks to buy the Hoboken, N.J.-based discount online retailer. It is unclear how much Walmart would pay for Jet, but the WSJ cited sources saying Jet could be valued at $3 billion. Last year, Jet closed a $500 million funding round, and its valuation tops $1 billion.

Jet was aware of the uphill climb to compete with Amazon, and it is looking at several years of losses as it gets off the ground. The company projects it will have to spend hundreds of millions to establish loyalty among customers — making a journey on its own a potentially challenging one.

A sale could give Jet the funds needed to establish itself among customers, and help inject energy into Walmart’s growing e-commerce efforts as it competes more aggressively with Amazon.com. The WSJ reports that Walmart would be most interested in Jet’s pricing software, shipping warehouses and customer data.

Jet originally set out to accomplish a lot of what Amazon does with fast shipping and a huge selection of goods, but it wanted to build a completely new model to do it. Using a formula related to the size of the order and proximity of the merchandise to buyers, Jet offers lower prices than users might otherwise find. Jet originally charged members a $50 membership fee to shop on the site, but later dropped that plan.

GeekWire tried the service out before it launched last year, and similar media outlets have reported item discounts. GeekWire previously reported members get small discounts on most items and additional savings were tacked on if they did things that made transactions cheaper on Jet’s end, like placing larger orders or selecting items that didn’t have to be shipped as far.

Walmart has been trying for years to compete with Amazon in the online shopping market. It launched a competitor to Amazon Prime called ShippingPass, which costs half as much as a Prime membership. Walmart also countered Amazon’s big Prime Day sale with a week-long sales event of its own.

Some aren’t so sure that a Walmart buy of Jet.com will catapult the nation’s largest brick-and-mortar retailer to success.

“Jet.com set out to dethrone Amazon, but hasn’t had the scale nor logistics advantages needed to really compete. And Walmart continues to snipe away at Amazon with programs such as ShippingPass. Their hope is that once you start using it you’ll notice the low prices on everything, and become loyal,” said Stephan Schambach, CEO and founder of NewStore. “That’s wishful thinking. Amazon has proven that convenience trumps low prices in achieving sustained loyalty.”

Schambach added that Walmart could try to leverage Jet.com’s technology, with its own physical store presence. “This combination of a massive brick and mortar footprint with emerging e-commerce player would put both companies in a better position for battle. I still don’t think they’ll be able to beat out Amazon, but it will be interesting to watch them try,” he said.

A potential sale would also mark the second time that Jet.com founder Marc Lore has cashed out his e-commerce ambitions.

Lore sold his previous company, Quidsi, known for the Diapers.com site, to Amazon in 2010 for about $545 million.

It was later revealed through reporting by Brad Stone in his book The Everything Store, that Amazon put the screws to Quidsi. Stone detailed a price war between Amazon.com and Diapers.com, which culminated in Amazon launching a competing service called “Amazon Mom” at the same time that Quidsi execs were in an acquisition meeting with Bezos.

Could Lore now end up in the camp of Amazon.com’s fiercest retail rival?

That will be interesting to see.