PALM DESERT, Calif.—Oscar-winning director Alejandro González Iñárritu has taken audiences on mind-blowing experiences in recent years, telling stories of vengeance in The Revenant and an actor’s struggle to overcome insecurity in Birdman.

Now, he’s taking his movie-making talents to the world of virtual reality, telling a story of immigrants crossing the desert into the United States. Iñárritu says that it has been a “fascinating” experience working on the VR film, but not just because of the cutting-edge technology. Speaking at the EY Strategic Growth Forum, Iñárritu said the film is allowing him to connect with people whose stories are often never told, stories that few know because so many are misinformed.

And, for him, that’s what drives his moviemaking decisions. 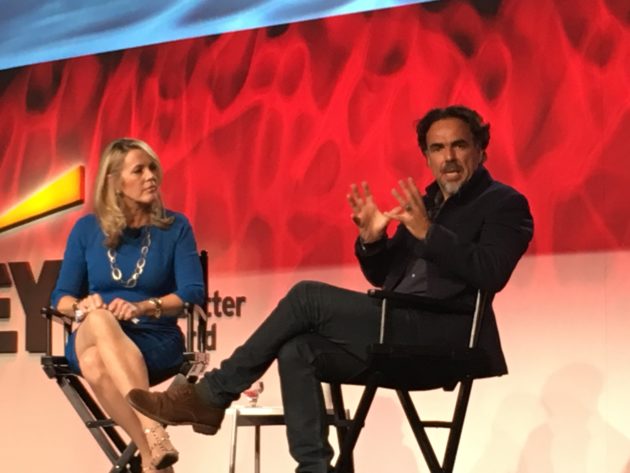 “40 to 50 percent of these people are refugees, and the stories that they are behind are the most horrific things,” said the 53-year-old Mexican director. “They are running for their lives… I am trying to capture this in a 60-minute piece that has been teaching me so much. Beyond the technology that I am learning … the purpose that I have is very obvious.”

While the new film “probably will not make money,” he said telling these stories is really what drives him.

“I think we all love money,” said Iñárritu, but he added that the projects he chooses need to have meaning and purpose. “Without the meaning, I couldn’t work,” said Iñárritu, adding that he explored this theme in Birdman.

“If there is not, at least for me, a very profound, subconscious learning process that has a meaning about the small experience that we have living in this little planet floating in the middle of nowhere … if we don’t get that, I think that is the why there are so many suicides. I mean what is the reason to possess things that only burden our possibilities in many ways.  I think for me it is a crucial, crucial, crucial element. And, sometimes even, I question myself. You know what is the most difficult thing for me. In the middle of madness, I forgot what was the original intention, and I have to return and say bell — ping — the original intention was (this).”

And, by the way, if you’re looking for clues on how Iñárritu pulled off that amazing bear attack scene in The Revenant, he’s not giving away his secrets.

“I know a lot of people went into a lot of research about it,” he said. “I feel that filmmakers in a way … cinema was developed as a magic trick…. You think about it like ‘wow.’ And I think we should keep it like an illusion.”