Booster Fuels, which allows car owners to request a fueling truck to fill vehicles wherever they are parked, has raised $9 million in funding in a deal led by Maveron. Other investors include Madrona Venture Group, Version One Ventures and RRE Ventures, with Booster Fuels saying it will use the capital to expand its on-demand fueling operations in North Texas and Silicon Valley.

That’s the good news. The bad news: The young company is moving most of its operations from Seattle to Silicon Valley to “be close to our customers during this phase,” CEO Frank Mycroft tells GeekWire via email.

The company promises to eliminate the need for drivers to make trips to the gas station. Instead, they install the Booster Fuels app, and then request a time for a fueling truck to arrive to pump gas into the vehicle. 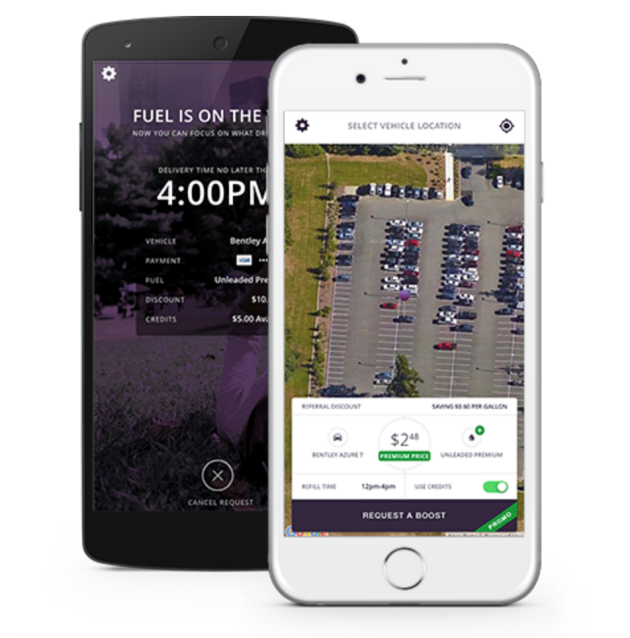 Customers must leave their fueling door open for easy access. Once fueling is complete, Booster Fuels shuts the fuel door and sends a notification to the customer.

Booster Fuels says it buys its gas wholesale, so it can pass savings on to customers.

“Getting gas late at night when you’ve been at work for 12, 16 hours a day — you want to spend time with your family, not getting gas,” Mycroft told GeekWire in a story last year. “It’s such a simple problem that hasn’t gotten better.”

Booster Fuels is not yet available in the Pacific Northwest, but Mycroft said that they have their eye on the market. For now, he said they are laser focused on building a great service in Silicon Valley and Texas.

The departure of Booster Fuels is a blow to the Seattle startup ecosystem, since the company was considered one of the region’s rising stars. Mycroft says he “loves” Seattle, and that he’s still considering whether he’ll relocate to the Valley.

A number of startups also are attacking this nascent market, including on-demand fueling startup Purple and Filld and WeFuel. Just this week, WeFuel officially launched its service in parts of Silicon Valley, with CEO Ale Donzis noting that “creating a connected platform to replace the gas station in a safe, secure and scalable fashion is not trivial.” Donzis claimed in the release that they’ve “executed perfectly from the start.”

That sort of adoption has the venture capitalists excited.

“Frank and his team have not only come up with a great business idea, they have executed with precision,” said David Wu of Maveron, who is joining the board. “They are truly applying technology, from logistics to mobile apps, to solving an issue most consumers encounter several times a week. I’m excited to be working with their team.”

Asked about competition, Mycroft, a former executive at asteroid mining company Planetary Resources, said that they are focused on “safely delighting customers.”

“From our vehicle design, to our fuel procurement, to our driver training are unmatched,” he said.