Amazon announced today that Kindle eBooks and items Fulfilled by Amazon can now be used as contest prizes by users of Amazon Giveaway, a free service that helps organizers to run online promotional contests to generate buzz about their brands and to grow their social media presence.

The online retail giant has added tens of millions of Kindle eBooks and FBA items as prize options for contest organizers, the company said. Not every item available on Amazon is eligible for the giveaway program, but this has expanded the options. The addition also will help eBook authors and FBA sellers (who might also be the contest organizers) increase sales and product exposure.

Just over a year old, Amazon Giveaway has attracted mostly authors, marketers, bloggers, and artists, as well as more than 9 million contest entrants, the retail giant said in a news release. The giveaways that Amazon runs can work one of two ways, with winners chosen on a first-come, first-served basis or winners chosen based on a pre-set lucky number (e.g. every 25th entrant wins a prize). Organizers can choose up to 50 items in up to $5000 worth of Amazon merchandise to designate as prizes.

Amazon verifies the identities of entrants and prevents multiple entries by having contest hopefuls log into its website. This means that contest organizers cannot host their contest on their own page; instead, they need to send a link to entrants to their contest hosted on Amazon’s site. 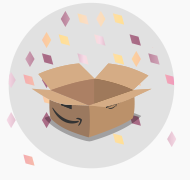 Once verified, entrants see an animated Amazon box, which they click on to reveal whether or not they have won a prize. During the week that a contest runs, traffic to the product pages for the giveaway prizes increases by more than 40 percent in weekly growth, Amazon said.

One of the key features of Amazon Giveaway is that it can require prize-seekers to follow the contest organizer on social media to be eligible to win a prize. To date, this feature has generated over 2.8 million new Twitter followers, Amazon said.

Similarly, Amazon introduced a feature specifically for authors in December, where authors using Amazon Giveaway can require contest entrants to follow them and their books on Amazon. The feature has resulted in 300,000 new Author Follows since it launched, Amazon said. And now, authors can reward entrants with their work in eBook form, so they pay no shipping fees.

Amazon Giveaway is free for contest organizers to use beyond paying for the giveaway prizes, tax, and shipping. The online retail giant automates and administers the contest based on the terms decided by the organizer and then ships the prizes to the winners. It also handles tax documentation if the prizes are above a certain size.

Other new features announced with the addition of Kindle eBooks and FBA items to its prize options were a change in the layout of Amazon Giveaway to better highlight hosts’ products and brands and an extension of contest length to up to 30 days, if the contest prizes include eBooks.