SAN FRANCISCO — Stephen Curry loves Instagram, supports Hillary Clinton, and wants robotic referees — if only to prevent him from throwing any more mouthguards.

Those were a few of the tidbits from Curry’s appearance at TechCrunch Disrupt on Tuesday evening in San Francisco, closing out Day 2 of the annual tech conference with a wide-ranging 30-minute discussion about everything from the election to his various off-the-court projects.

Curry was the final speaker to walk on stage Tuesday, but certainly received the loudest applause from the hometown crowd as many from the packed room at Pier 48 rushed near the stage to snap a photo of their MVP. 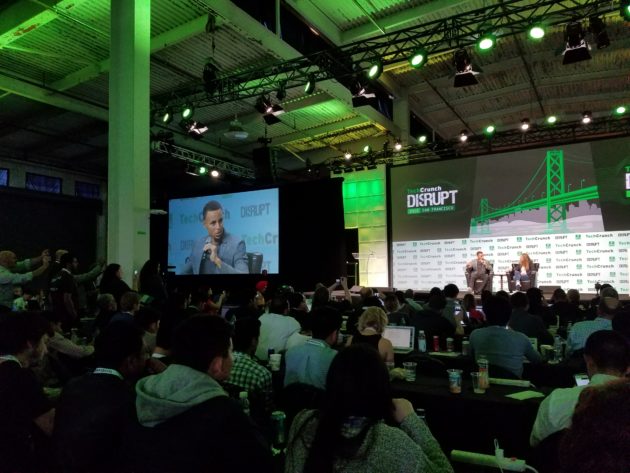 Curry may be a full-time ball player, but he’s also heavily involved in the technology arena. In March, the 28-year-old helped launch a social media platform called Slyce with a former college teammate. He also inked a deal with a Bay Area-based company this month that will help him build an app and other tech-focused tools for his fans in China, where he recently visited.

Curry said Tuesday that he’ll consider investing in other companies that he isn’t directly involved with down the road, too, following other current and former NBA stars like Kobe Bryant and Carmelo Anthony who are backing startups.

“Being here in the Bay Area, you definitely feel that energy,” he said of the tech climate, adding that “it’s ingrained in the DNA of the area.”

The 2016 MVP, who won the prestigious honor with an unprecedented unanimous vote, said that many visiting players throughout the NBA season will ask him to intro them to techies in Silicon Valley.

“They want to take advantage of the opportunity here and take meetings and get into the culture, for sure,” said Curry, who participated in the first-ever NBA Technology Summit this summer.

His session at Disrupt was titled “social activism with Steph Curry” and the 28-year-old talked about his involvement with the UN Foundation’s Nothing but Nets campaign. For the past five years, Curry has donated three malaria-preventing nets for every 3-pointer he makes — he drained an NBA record 402 last season.

“Malaria is a disease we can eradicate,” he noted. “We are on that trend and this could be the generation that totally gets rid of malaria once and for all.”

Curry said he hopes to also get involved with local organizations, like helping kids at Bay Area schools improve their educational opportunities. 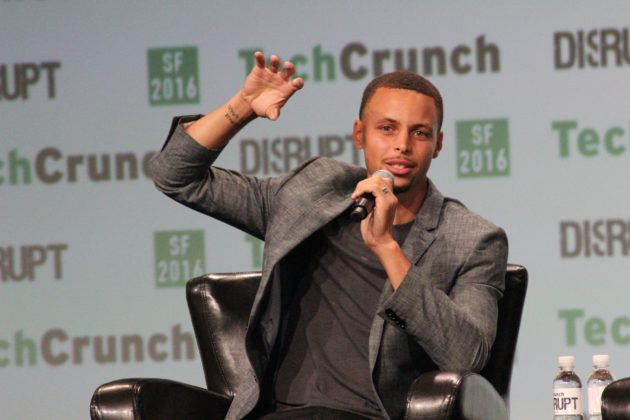 He was also asked about his thoughts on Colin Kaepernick, the San Francisco 49ers quarterback who sparked a nationwide debate after sitting (and now kneeling) during the national anthem as a form of protest against racial oppression and inequality in America.

Unlike Kaepernick, Curry said he’ll “most likely” stand during the anthem during the upcoming NBA season. From Curry:

“If you follow the way he talks, the message he is trying to send with his act, he’s not, from his mouth, disrespecting the veterans or the military. That’s not his intention. He’s obviously continued the act to create the conversation for more social justice. I’ve been a part of certain conversations off the grid, finding different ways to make our community better, especially for African-Americans. So that’s not the way I’ll do it. But I support him in his attempt to start the conversation or continue the conversation or try to better a terrible situation we’ve seen for awhile, but specifically in the last five years. I commend him for his act but I would do it in a different way.”

Asked about how he balances his own personal beliefs with his far-reaching platform, Curry said it’s difficult, “but at the end of the day you just have to be true to yourself and obviously understand both sides of the equation,” he noted.

“My approach is, you’re not going to please everybody,” Curry said. “That is what America is all about. Some people agree with Colin; some people don’t. The common thread is that there is change that needs to be made.

“For me, the process always hasn’t been great,” he continued. “Things you might push out on Twitter, you may want to reach out and try to grab it back because in that moment, you fear what the backlash will be. That’s kind of human nature. But at the end of the day we’re blessed with this platform we have to reach out and influence so many different people across the world. You’ve got to use it and not be afraid of the negatives that might come your way.” 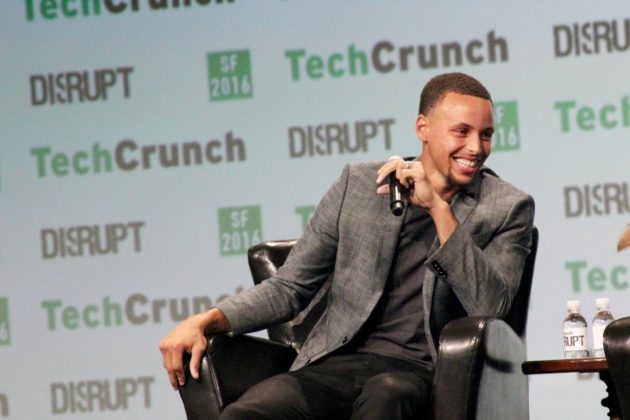 Curry, who led the NBA in scoring and steals last season, said he’s very much open to new technology that can help his performance on the court. The day before, he spent an hour shooting around at the Warriors practice facility and said he was able to access a computer that showed him detailed data like the arc of each shot and the optimal entry point into the rim.

“It’s all good information to have, as long as it doesn’t overload you when you’re on the court and can play free,” Curry said.

It’s all good information to have, as long as it doesn’t overload you when you’re on the court and can play free.

Curry joked that he’d love to have technology in his calf that would “help me dunk more.” He also said, half-jokingly, that he “would love” robotic referees, which could very well happen in the near future based on technology advancements.

“I wouldn’t have to throw my mouthpiece at those new inventions,” Curry joked, referencing his famous mouthpiece toss and subsequent ejection during the NBA Finals in June.

Curry also said he prefers Uber over Lyft. He has an alias on the app, but whenever he gets in an Uber car, the drivers recognize him and unsurprisingly get excited.

“Those rides with the drivers are amazing,” Curry said. “They are the biggest fans slash coach slash GM slash owner slash aspiring basketball player themselves. It’s usually a fun ride.”

Curry’s favorite app is Instagram — and Slyce, of course — but he oddly avoided answering whether he prefers iOS or Android.

Finally, after noting that he prefers Hillary Clinton over Donald Trump, Curry offered advice to tech CEOs that enjoy huge success, much like he has in the NBA.

“Enjoy the process, but don’t let anything distract you from how you got there — the time and work you put in, the brainwork it takes to get to that level,” he said. “Use it for your own good as your platform and responsibility increases. It’s definitely a blessing. Don’t be afraid of it.”