LAS VEGAS — Major League Baseball is serious about bringing its sport to China.

At the big Consumer Electronics Show in Las Vegas, the league today announced a three-year partnership with Chinese tech giant Letv that will bring official live-streamed MLB games to China, Hong Kong, and Macau for the first time ever.

The deal, which is the first mass market MLB media agreement in China, will allow Letv’s sports arm, Le Sports, to stream 125 MLB games per season beginning this year on its platform. The games, made up of 96 regular season and 20 playoff match-ups, along with the All-Star Game, Home Run Derby, and World Series games, will broadcast with Mandarin programming. All content will be available on-demand.

For the past three years, MLB has worked with Le Sports, which already produces a baseball reality show called MLB Perfect Pitch. Along with streaming games, Le Sports will also establish online communities for all 30 MLB clubs and sell official MLB merchandise on its platforms.

“We need to work with local partners to make sure that we make baseball as culturally-relevant in other countries as we possibly can,” MLB Commissioner Rob Manfred said today. “For that, we need great partners, and Le Sports is the perfect partner for us in China.”

MLB opened its office in China in 2007 and has three MLB Development Centers in the country where it helps train prospects. It has already graduated two classes and this past July, Itchy Xu became the first player from the development centers to sign with an MLB team after he inked a deal with the Baltimore Orioles.

The league also runs a youth baseball program called Play Ball! in China. Manfred said today that “we really do believe that we are at an inflection point in China.”

“For us, China is the prototype for our international efforts,” he said. “We feel like we need to build a durable foundation in the local culture of each country and then expand our efforts with a great mass media partner.”

Le Sports, a subsidiary of Letv — which has 53 million daily active users and several core business units like e-commerce, automotive, Internet TV, hardware, event production, and more — raised a $121 million Series A investment round last year after launching in 2014 and is already one of China’s top sports technology companies.

Le Sports VP Strategy Yu Hang noted that there is a “great revolution” happening in the Chinese sports industry. He said that the Chinese government wants to see the sports industry generate more than $1 trillion in business by 2025 — that’s up from just $63 billion last year.

“The sports industry in China is booming and has huge potential,” Hang said.

Hang noted that Le Sports plans to build its own MLB television studio and will focus on “offline activation” by helping the league promote baseball across schools and other programs in China. 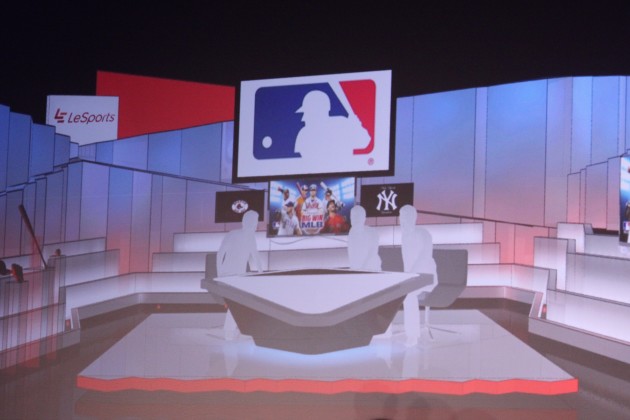 Chris Park, MLB’s Senior VP of Growth, Strategy and International, said that the league works to promote baseball outside of its development centers, including college tournaments and clinics. He noted that the Beijing college baseball league has grown larger than the city’s college basketball league.

Park added that Le Sports is “the sports technology platform in China” — the company has inked other exclusive deals with Wimbledon, the English Premier League, and ATP — while calling the partnership a “perfect fit.”

One interesting thing to note here is a pattern of American sports leagues looking to China for international expansion. There were many parallels from today’s press conference to my trip to Alibaba’s headquarters in China this past November. Alibaba inked a 2-year deal with the Pac-12, sponsoring an annual U.S. college basketball game played in China, with the first in November between the University of Washington and the University of Texas.

It was another example of a China-based tech giant teaming up with an American league — the NBA is big in China, too — hoping to bring their respective sport to the world’s most populous country that has a growing middle class — one that Zhenjian, the Le Sports CEO, referenced today.

“These people would love to have children participate in baseball,” he said.