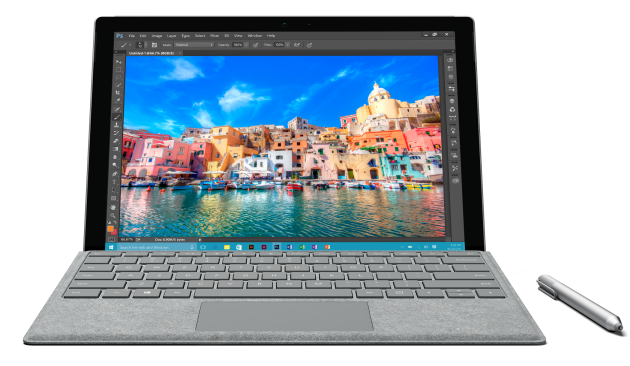 What makes a keyboard premium? Maybe it is the key travel, a backlight or how clicky it is. For Microsoft, it is also the material that the keyboard is housed in.

At least, that’s the story it’s telling with its new $160 Signature Type Cover for the Surface Pro 3 and 4. The “luxurious” keyboard and touchpad combo is surrounded in a material called Alcantara, which Microsoft claims is durable yet soft and “ages beautifully, growing richer and darker over time.”

According to Microsoft, the premium keyboard takes five weeks to produce, thanks to a complicated extrusion process for the material, which is also crimped, needle-punched and dyed before the final assembly. Because of quirks in the material, each case has a unique two-tone pattern that reflects age by getting darker and richer.

Not much has changed from the standard, $130 Surface Pro Type Cover other than the new material, which replaces the plasticy-yet-soft shell of the standard model. The same large glass trackpad and spaced keys give the cover a laptop-like feel for getting work done.

The premium keyboard comes as Microsoft sees increasing pressure from Apple with its iPad Pro lineup. Apple sells an iPad Pro keyboard case with a fabric overlay, but its model lacks a trackpad (in part because iOS doesn’t support input from a mouse).

The Signature Type Cover is available now for $159.99.