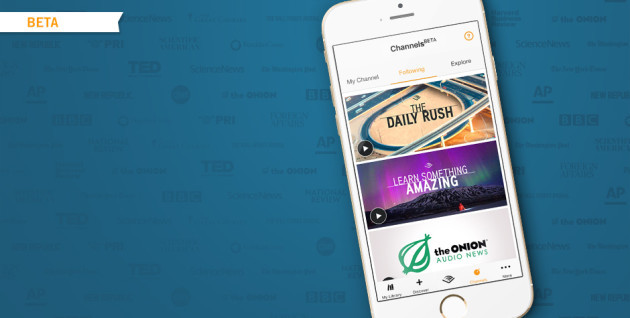 Audible, the Amazon-owned company that built its business selling audiobooks, is now officially moving into podcast-like shorts with a beta of Audible Channels.

Podcasts have been on the rise in recent years, with Serial, a spinout from This American Life, capturing the Reddit zeitgeist and getting plenty of people into audio storytelling for the first time. Now, Audible is trying to become the Netflix of podcasting, with original content and news from some of the nation’s top sources.

Channels are a new section currently being beta tested by select users, with news and comedy audio shorts, along with book excerpts and short stories, all ad-free. The content is analogous to podcasts, but you won’t be finding This American Life or Comedy Bang! Bang! here.

Instead, it’s lots of original content like Hold On with comedian Eugene Mirman, and guided meditation recordings, along with professional readings of articles from the Washington Post (owned by Amazon CEO Jeff Bezos), the New York Times and Scientific American. There are also short stories and excerpts, collected into Channels of their own based on subject or author.

Channels do have some shows that can be heard elsewhere, like Marketplace and Smithsonian Magazine’s The Future is Here, but for the most part, this content is only in Audible. And that means it’s only available to Audible subscribers, who pay $14.95 per month for the audiobook service. However, an Audible spokesperson said the distribution model may shift after gaining insights from the beta period.

That puts Audible Channels in the same category as House of Cards or Game of Thrones, locked behind paywalls as premium content. And, according to an Audible spokesperson, the selection of original content is set to grow quickly, with new content being added throughout the beta period.

The move is a stark shift from the open podcast environment, which let anyone download podcasts to the player of their choosing via open RSS feeds. Audible, along with a few other podcasting players like Earwolf and Gimlet, are putting content behind paywalls to monetize shows with something besides traditional advertising.

“The potential impact of Audible’s move into short-form audio, particularly news, is obvious. Amazon is a giant company. Audible has a large and established base of paying subscribers,” writes Shan Wang of NiemanLab. “… It’s easy to see how The Washington Post could, with a little investment, be turned into an engine of audio news.”

Audible’s new audio ambitions were first hinted at back in May, when the company hired NPR’s former vice president of programing, Eric Nuzum. He’s heading the original content team for Audible, and is likely behind the new shows.

The most interesting Channels are the articles read aloud. Each story is professionally recorded as it’s read pretty much verbatim. For those used to standard stories written for radio, the reading of the written articles can be a little strange at first, but it does serve as a way to catch up on some news.

However, original content will likely make or break Audible Channels. With podcasts available for free on pretty much any subject you can think of and through a variety of custom applications, reading news articles won’t entice users to pay for the service. However, if Audible can land a Serial-style hit, users may sign up for the service in droves, leading them to more original content and getting them to stay on as paying subscribers.