This is not your beige box under the desk. HP is moving its PC business into the smart home speaker market with the Windows 10-powered HP Pavilion Wave tabletop computer — promising high-quality audio for music, gaming, TV and movies, plus microphones for interacting with Microsoft’s Cortana digital assistant.

The Pavilion Wave, unveiled tonight, is a full-powered triangular computer with a woven-fabric exterior, and a speaker in the middle topped by a parabolic reflector designed to spread audio evenly throughout a room.

With the market for traditional PCs declining steadily, the new computer is a move by HP to grab a piece of the growing smart speaker market, which is expected to more than triple to $5.5 billion worldwide over the next four years.

It’s a high-profile test for HP, which has reclaimed its title as the top PC vendor in the U.S. but still trails Dell worldwide. It’s also an interesting expansion for Microsoft Cortana — potentially giving the virtual assistant in Windows 10 even more of a presence in the living room, beyond its current Xbox One integration. HP says it tested the Cortana voice integration extensively in developing the new device. 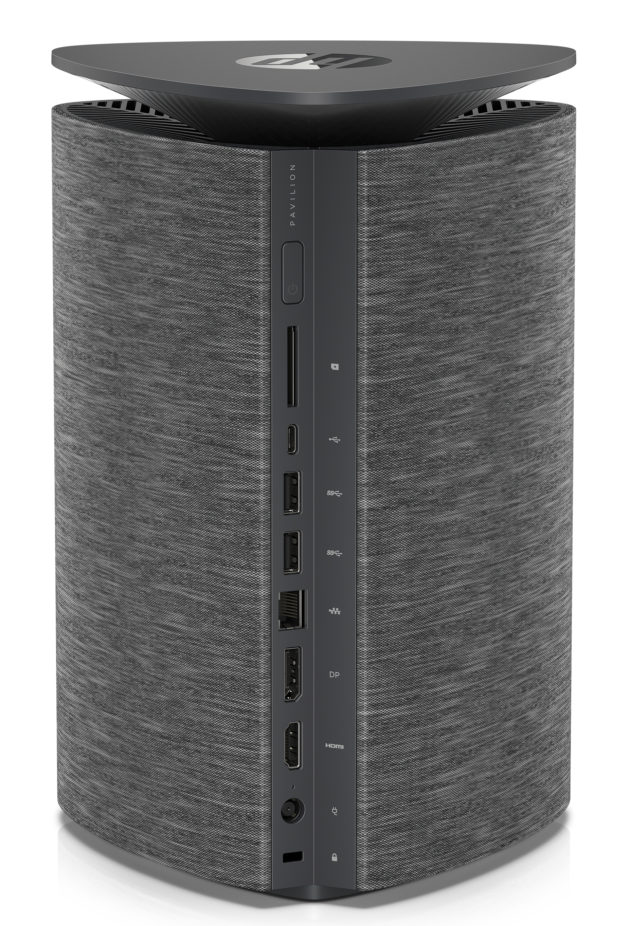 Think of it as a souped-up speaker or an audiophile’s computer. HP says it’s about 15% the volume of most traditional Pavilion towers. It’s HP’s first-ever tower with integrated speakers and microphones.

At a starting price of $530, the device will be hundreds of dollars more than Amazon’s Alexa-powered Echo smart speaker — but it also starts with 8GB of memory, a quad core Intel Core i5 processor, and a 1TB hard drive, along with HDMI and multiple USB ports, among other home-computer staples.

“It appears more as a functional piece of furniture rather than being an electronic device,” said Mike Nash, a vice president for HP Inc.’s consumer PC business. The current incarnation of the company, based in Palo Alto, Calif., was one of two companies created from the 2015 split of the former Hewlett-Packard Co.

The HP Pavilion Wave goes on sale Sept. 23. Prices range from $530 to $700 depending on configuration.

In addition, HP tonight is unveiling a new desktop business computer, called the HP Elite Slice, with optional modules for turning the PC into a Skype for Business phone, a conference call speaker phone, or a wireless device charging station, among other functions.

The HP Elite Slice runs Windows 10 Pro. It will also be released in September, starting at $699.