It’s been a good year for LiquidPlanner.

The Seattle-based online project management software company completed the biggest deal in its history — with a large Dallas-based children’s hospital the company declined to name — in June. The company says it has been growing about 40 percent year-over-year for the last four years and is on pace to hit $10 million in annual recurring revenue and break even on cash flow in 2016. LiquidPlanner this week also released a small business version of its project management platform.

The Seattle-based startup is in a competitive market with well-heeled competitors, but LiquidPlanner’s CEO Liz Pearce says the company has focused on building a product that stands out from the competition and a solid, lean business model before scaling up to a huge audience. Right now, approximately 1,800 organizations use LiquidPlanner.

“Because we have an offering that is really different in the market, it allows us to compete more efficiently with other competitors that are all essentially one in the same with different trimmings,” Pearce said.

Pearce said most project management programs are “static” and require people to go in and manually enter a lot of data. LiquidPlanner, Pearce says, uses predictive planning technology to estimate when a project will be finished.

“We’ve created a platform that is much more fluid and flexible and can actually adapt to the changes happening every hour of the day and still give you really good predictability into what you can do with the team you have,” Pearce said. 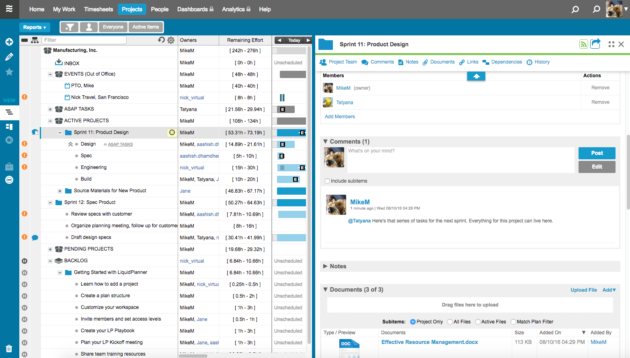 And now that platform is expanding to include small businesses. Available to teams of up to five for an annual fee that breaks down to $49.95 a month, the small business product has been under development for several months. It started because the company was tired of turning down small businesses wanting to use LiquidPlanner. Pearce said LiquidPlanner previously didn’t have the right product for a team of just a couple people.

“We decided to invest in building something that was the right size, shape and price point to serve that market.” Pearce said.

LiquidPlanner has remained the underdog in the online project management market given its relatively modest $13.6 million in funding to date, while some competitors have raised upwards of $100 million. But the company, founded in 2006 by former Expedia vets Charles Seybold and Jason Carlson, has continued its success.

The Seattle startup in February raised $2 million in funding from existing investors like TVC Capital and angel investors like Geoff Entress, topping out a Series B round that began two years ago when it reeled in $8 million to develop new product features and to build out sales and marketing strategies. The 65-person company, which increased revenue by 40 percent in 2015, will stay the same size for most of the year, Pearce said. But heading in to next year, LiquidPlanner expects to hire more people.