INRIX today announced an acquisition that will help it compete with Apple and Google in the connected car industry.

The automotive technology company just swooped up OpenCar, a Seattle-based startup that develops an app platform for in-car dashboard technology. The 20-person OpenCar team will remain at its current office in Seattle, which is now INRIX’s official new Seattle hub — the company is headquartered across Lake Washington in Kirkland — and there are plans to find a larger office space.

INRIX CMO Steve Banfield told GeekWire that the acquisition, INRIX’s third overall and second in the past year, will allow the company to sell customizable in-car software to carmakers, depending on their needs.

Many carmakers want something beyond Android Auto and CarPlay that offers more flexibility with the software and apps used by drivers inside a car, Banfield explained. He added that there are also data privacy issues some carmakers have with the Google and Apple’s software.

“For a while, they’ve talked with us about having a better solution for creating and deploying applications in connected cars,” Banfield said of the car manufacturers.

OpenCar worked with Mazda for the past few years, helping the carmaker build white label software specific to each vehicle’s interface design, hardware controls, driver safety considerations, and other aspects of the car — allowing the apps to be easily customized for each vehicle, which is less restrictive than what Android Auto or CarPlay offer.

“This gives them control of the user experience and how the data is used, which are two things that neither Google or Apple allowed them to do,” Banfield said.

He added that some carmakers will still build Android Auto or CarPlay into their vehicles, but with OpenCar — and now, INRIX — they’ll also have the option of developing their own platform alongside.

Banfield said INRIX considered partnering with OpenCar to access its technology, but both companies realized that an acquisition made the most sense. While OpenCar had the right product, it’s tough for startups to break into the automotive industry, Banfield explained.

“It’s really hard for a major manufacturer to believe in a startup, and know that it’s going to be around for the next five, 10 years,” he said. “By combining OpenCar at INRIX, we are setting the stage to bring this technology to a lot of OEMs.”

Added Jeff Payne, CEO of OpenCar: “The automotive market has responded very positively to the OpenCar offering for some time. But the industry is conservative and, with only five years of operating history, OpenCar is a relatively new business. INRIX is a trusted, independent partner of many automakers, with a highly complimentary product offering and strong motivation to build and promote the OpenCar platform.”

Founded in 2006, INRIX originally built its business on traffic analysis, which still accounts for a large chunk of revenue. But the company, which now employs close to 400 people worldwide, now also wants to use its swath of data — sourced from more than 100 million cars in its network — for the connected car experience.

“This is the first time we’ll build software that goes directly inside the connected car,” Banfield explained. “Up until now, we’ve only built software in the cloud that delivers our data and connected service via APIs.”

Separate from the acquisition, INRIX also today announced a new service called Autotelligent, which is somewhat of a in-car virtual assistant that learns how you drive, your preferences for routes or parking, and your most-visited locations. It also uses a driver’s calendar and contact information to create personalized itineraries for trips, and utilizes INRIX’s existing data on real-time traffic, weather alerts, and hazardous road conditions, among other relevant information. 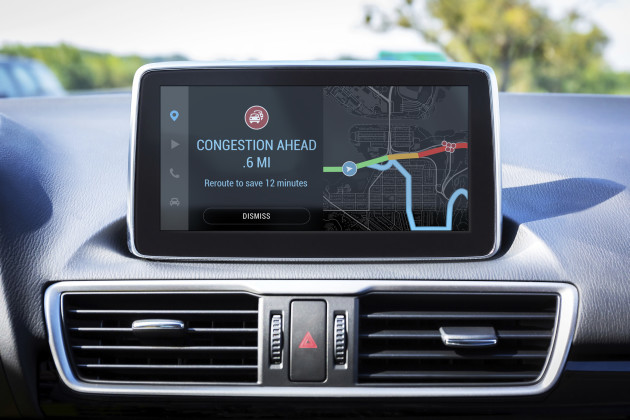 The idea is to have Autotelligent work with OpenCar for an all-in-one connected car platform.

“The standardization of in-vehicle app development is a major milestone for the industry and will be a key differentiator for our customers,” Andreas Hecht, executive vice president and general manager of automotive at INRIX, said in a statement. “Combine that with the power of smart learning and cloud technology, and INRIX is able to offer automakers a legitimate in-car alternative to Apple and Google.”

This past September, INRIX made another acquisition, swooping up ParkMe, a 25-person startup that tracks off-street parking availability and prices. INRIX has continued to grow over the past decade and rumors of an IPO have surfaced.

“These acquisitions are a testament to the company’s willingness to expand outside of its pipelines and expand the important data and services we offer to the connected car industry,” Banfield said. “Who knows what happens in the future, but right now we are just focused on execution and growing our business.”