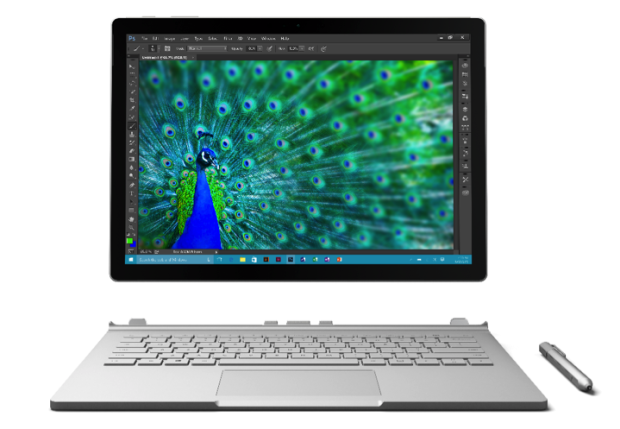 Microsoft’s latest quarterly results show a company in transition. Declines in the traditional Windows business continue to be partially offset by growth in Azure, Office 365 and other cloud services. 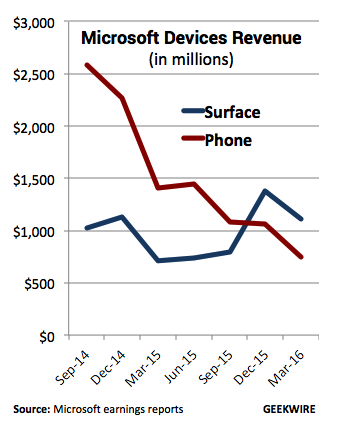 But there’s another interesting trend taking place in the company’s devices business. Revenue from Microsoft’s own Surface line topped $1.1 billion in the March quarter, officially surpassing revenue from the company’s phone business for the second straight quarter.

Microsoft’s phone revenue slipped to $747 million, a 47 percent decline from the same quarter last year, according to an SEC filing. The company sold 2.3 million Lumia phones in the March quarter, down from 8.6 million in the same quarter a year ago.

Interestingly, much of the growth is coming from business users, taking advantage of an area of traditional strength for Microsoft.

“Certainly consumers value these devices, but where we see the strongest momentum is through adoption in the commercial space, with particular strength in financial services, manufacturing and healthcare,” Nadella told analysts on the call.

However, the overall decline in phone revenue — the aftermath of the company’s failed $7 billion Nokia smartphone acquisition — is taking its toll on Microsoft’s larger devices business. Devices revenue overall fell 11 percent to just over $2 billion in the period, from more than $2.2 billion a year ago.

Microsoft last year scaled back its Windows Phone hardware ambitions, and with a tiny fraction of the market, the company is picking its battles and not seriously challenging Apple or Samsung in phones.

The obvious answer would be a Surface Phone, to reset the company’s strategy and focus attention on a new flagship device that would showcase Windows 10 on smartphones. But for now, at least, the company’s hardware leaders are keeping quiet on that possibility.