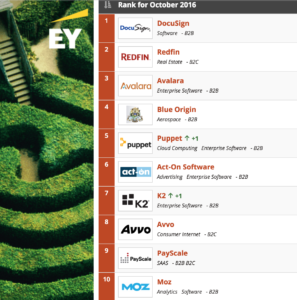 Last month it was IPOs, and this month it’s acquisitions.

It’s been a busy couple of months for members of the GeekWire 200 list of the top privately-held startups in the Pacific Northwest. After a long drought, two of our top companies, Impinj and Apptio went public over the summer. And now a few other GeekWire 200 stalwarts, Etailz, Zonar Systems and PitchBook were acquired this month.

Impinj, Apptio, Zonar and Etailz have all graduated from our list, though PitchBook remains as its deal hasn’t closed. Many fast-growing startups, mostly from the bottom half of the list are angling to replace them as 15 companies total had double digit movement this month. Many of the larger established startups have remained steady as only four top 25 companies showed any change this month.

There was a little movement in the top five as Puppet leapfrogged Act-On Software to come in at number five this month. DocuSign remains at number one this month, and the rest of the top five is made up of Redfin, Avalara, Blue Origin and Puppet.

Click for the full August update to the GeekWire 200 and continue reading for highlights.

Seattle-based sales technology startup Outreach rose 11 spots, to number 94 on our list after raising $17.5 million in a Series B round led by Trinity Ventures, with involvement from Microsoft Ventures and previous investors.

The company is using the funds from the Series B round to expand its engineering team — further developing its automation and workflow technology for sales professionals — and expand its marketing team to reach new customers.

Outreach employed 80 people at the time of the funding round in June, and it expects to double its headcount in the next year.

Smart-garment maker Sensoria, which rose 10 spots to number 155, recently completed a $35,000 Kickstarter campaign to fund a new line of sports apparel and updated version of its fitness app. The new training app will communicate with heart rate monitoring technology in the clothing and send an alert for help should an athlete begin to experience certain cardiac irregularities that could precede a “catastrophic event.”

According to the Kickstarter page, backers will start getting their orders in November. Sensoria previously partnered with Microsoft a new soccer data dashboard powered by sensors in players’ shoes. The company also makes socks with sensors built into the garments.