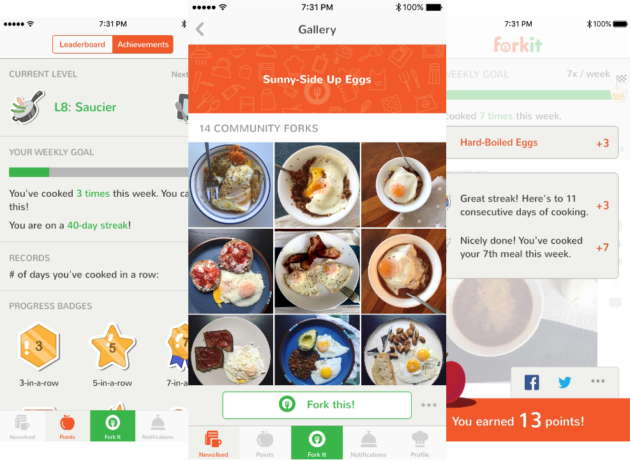 The miniaturization of many technologies has led to an explosion of fitness trackers. But for those looking to lose weight and get healthy, examining your exercise is only half the battle. Healthy eating is a hugely important step in getting fit. A new app from Seattle startup Kitchenbowl encourages users to cook at home and track their food with simple check-ins.

Fork It can be summed up as a “Fitbit for food.” But it draws inspiration from many of the most inventive apps out there, from Foursquare to MapMyRun to Goodreads. The core of the app lets you track the meals you cook with pictures and show off your creations to friends.

The app pulls cooking options from the vast library of recipes already in Kitchenbowl’s namesake app or from popular cooking sites like Epicurious and Allrecipes. But it’s not focused on counting calories. Instead, it just encourages you to cook at home more, which could lead to better health overall.

“Our early data suggests that we can double the number of dishes you make at home each week, helping you reach your wellness goals,” said CEO and co-founder Ryan Waliany. “Based on research, every day that someone eats out, that person is consuming 200 more calories than they would’ve had if they cooked at home.”

That sets it apart from apps like Lose It and MyFitnessPal, which focus on tracking the exact number of calories you consume. Waliany said that can be seen as a negative reinforcement, whereas the check-in process of Fork It is a positive encouragement.

He also sees the app as a companion to the current Kitchenbowl app. It’s similar to the relationship that Foursquare and Swarm have, with the former holding data and helping users find restaurants, while the latter lets them track where they’ve been. Kitchenbowl holds recipes, while Fork It leverages that information to help you keep track of what you’ve cooked.

There is also a gamification aspect where you earn points and badges for cooking streaks or meeting goals. As friends join, you can compete with them to see who’s the better cook or just show off what you’re cooking.

The app is free to download, and Waliany said he hopes to build up a context-aware advertising model in the future.

“Since we’ve built our database by aggregating millions of internet recipes and using machine learning to derive cooking topics, we are able to gather a prototypical definition of what ‘lasagna’ is based on ingredients, and we know exactly what consumers are purchasing over time as well as what they will purchase in the future,” he noted.

And since it tracks what you cook, the app can suggest coupons or ads based on what you’re likely to cook next. If you’re making pancakes every Sunday morning, it may offer a coupon for syrup or sausage links next time you open it up.

Kitchenbowl has some time to wait before starting up an ad business, though, as the company raised $1.3 million last year from a variety of angel investors. Since moving from San Francisco to Seattle in 2014, Kitchenbowl has grown to an eight-person team and has added Seattle-based celebrity chefs Tom Douglas and Ethan Stowell as contributors to its recipe platform.