Several tech giants have set up engineering offices in the Seattle area in an attempt to tap into the vast software development talent base. But this trend isn’t just about companies like Google, Facebook, and Dropbox — small startups from outside of the Northwest are relocating north, too, for the same reasons.

Kitchenbowl is one example of this trend. When Ryan Waliany and his wife, Serena Wu, decided to launch a food recipe startup late last year, they lived 30 minutes outside of San Francisco. Being in a city was a priority for their company, but moving toward the Bay wasn’t a good option based on reasons like cost of living and an ultra-competitive hiring market.

So, they packed their bags and moved to Seattle.

“Seattle is just a really great place to build a company,” Waliany said. “The quality of talent here is completely untapped, and the quality of life is far superior to that of San Francisco.” 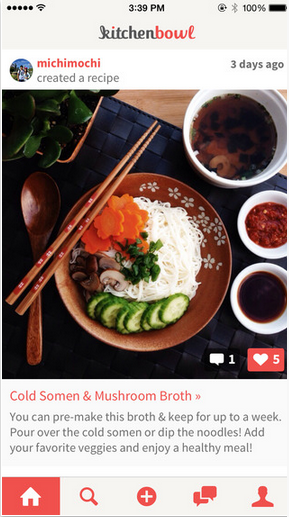 Though Waliany admitted that it’s easier to raise money in the Bay Area, he said that overall, starting a company in Seattle “is a much better experience.”

And it’s turned out to be good decision thus far for the four-person startup. Kitchenbowl, a social community for photo-driven food lovers to share and discover recipes, is already ranked No. 15 in the “Food & Drink” category in Apple’s App Store just a few weeks after launch.

“It’s been pretty interesting so far,” Waliany said. “We’ve managed to capture interest in a very, very crowded space in a short period of time.”

Waliany and Wu founded Kitchenbowl after they tried to build a database of recipes by taking pictures of chefs cooking meals and uploading the step-by-step process to a website.

That was a “disaster,” Waliany recalled, and the startup pivoted to focus on mobile content creation instead.

“Our goal is to leverage the transient nature of search traffic and convert that into an engaged mobile community,” Waliany explained. 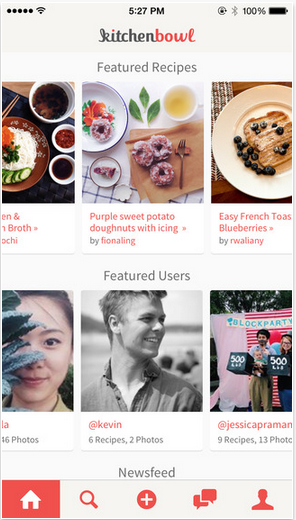 Kitchenbowl separates itself from other recipe apps by concentrating on high-quality photos that show users how to cook a meal from their mobile device, rather than relying on word-heavy blogs.

“Imagine how painful it was to build furniture before IKEA started using photos,” Waliany said. “That’s what we do. We take ambiguity away from recipes.”

The ultimate vision for Kitchenbowl, which is being used by people in more than 1,500 cities, is to have an international food community that share photo-based recipes from around the globe.

Waliany and Wu have raised an undisclosed seed round from Seattle-based Chasing Unicorns and a few angels. As far as making money, the company wants to apply a “recipe to table” model.

“By controlling the top-of-the-funnel for cooking, we can shift consumers to one-click grocery delivery, purchasing cookware, and native ads,” Waliany said.