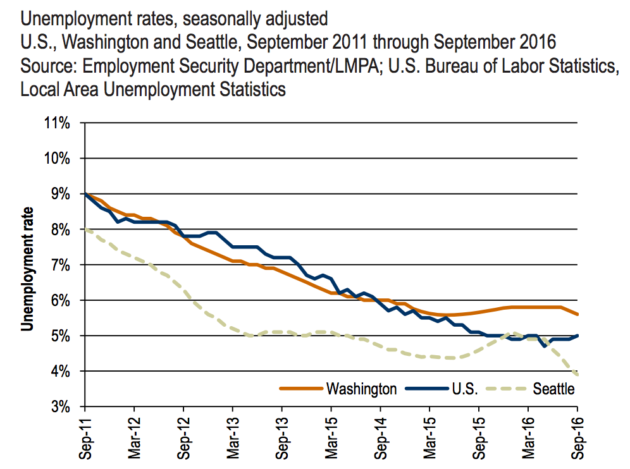 Unemployment rates in the Seattle metro area fell to 3.9 percent during September, down from 4.1 percent in August and well below levels from five years ago when the jobless rate hovered around eight percent.

A booming tech economy in the Seattle area is certainly playing a role in the numbers, evidenced by companies such as Amazon, Expedia, Facebook, Zillow, Salesforce and others which are rapidly expanding their workforces in the region.

Amazon.com now employs nearly 270,000 employees worldwide and more than 25,000 people in Washington state, and it currently has job openings for a reported 11,042 positions in the Seattle area. The company’s market value stands at $385 billion.

The information sector, where a number of tech jobs are classified, added 6,400 jobs between Sept. 2015 and Sept. 2016 in Washington state. Of those, 3,200 jobs were added by “software publishers.”

In total, 92,600 jobs were added between the 12-month period ended in September 2016. The Washington state unemployment rate fell to 5.6 percent, with 202,900 people in the state looking for work.

“Bigger picture, Washington is continuing to add jobs,” said Paul Turek, the state’s labor market economist. “We’re seeing growth in the labor force while trimming unemployment as employers continue to pull people back off the sidelines and into the job market.” 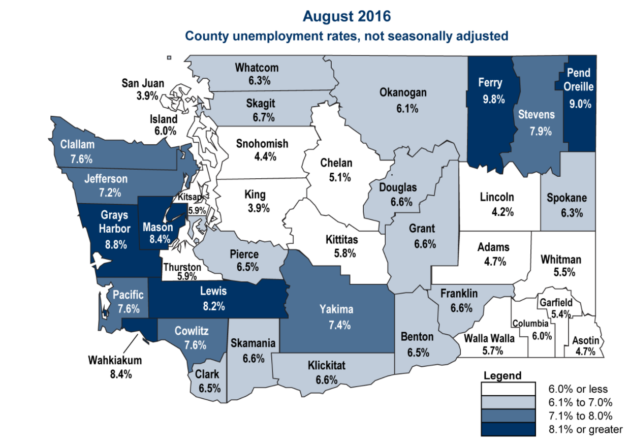 The full report is available here, and it comes amid a new report today from Zillow that Seattle’s housing valuations rank third in the nation in terms of appreciation. Median home value rose 11 percent in Seattle and surpassed $400,000 for the first time to reach $401,100 in September, the report said.