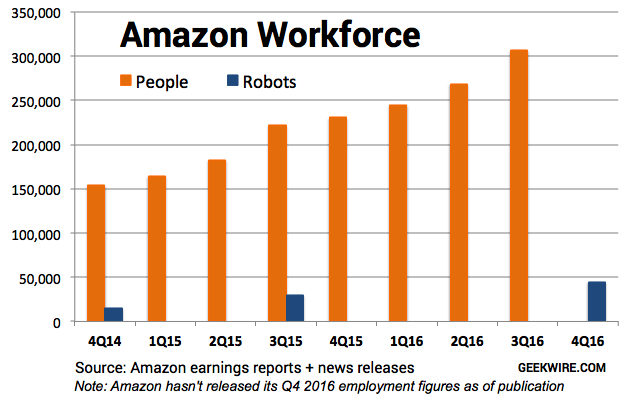 Amazon’s workforce has exploded in recent years, more than doubling since the end of 2014, when it employed 154,000 people. As of the latest count, there were 306,000 employees working worldwide for the Seattle tech giant.

But another group is growing just as quickly as the company’s human workforce: the number of robots working alongside people in Amazon fulfillment centers. The company said this week that it has 45,000 “robotic units” operating in 20 distribution centers working with people to fill and ship customer orders.

Even as human employment rises at Amazon, the bots are gaining ground. The number of bots as a ratio of Amazon’s total human workforce has risen to approximately 14 percent, using Amazon’s most recent figures for the end of this year — up from about 10 percent at the end of 2014 and 13.4 percent in the third quarter of 2015.

As it has grown and invested in delivering items as fast as possible, Amazon has built fulfillment centers all over the country, becoming one of the nation’s biggest warehouse employers. Manufacturing employment in general has been falling for more than 30 years, and yet U.S. manufacturing output is near its all-time high.

RELATED POST: Neither Trump nor Clinton is addressing the biggest challenge to jobs: automation

Amazon is quick to point out that despite the rise in robotic units in its fulfillment center, the process of picking, packing and shipping items is still human-driven. And even as Amazon continues to invest in more automation and technology, the 21-year-old company planned to hire 120,000 seasonal workers this holiday season — a new record. That’s up from 50,000 positions during the 2012 holiday season.

“The associates we have on the floor are by far the most valuable asset,” Greg Zielinski, general manager of the DuPont fulfillment center told GeekWire when we visited the facility in November. “They are the backbone of the company. Without them, this would be extremely difficult.”

There are more than 1,000 full-time employees at the 1 million-square-foot DuPont facility, in addition to hundreds of seasonal workers that Amazon hires during the holiday season. The employees are aided by more than 800 Kiva robots in the 8th-generation fulfillment center — a result of Amazon’s $775 million acquisition in 2012 — that do everything from sort packages to lift heavy 3,000-pound pallets 24 feet into the air.

The issue of lost manufacturing jobs has been in a big one, and it presumably played a role in Donald Trump’s presidential election win. While Trump has promised repeatedly to bring back U.S. manufacturing jobs, he has not talked much about automation, instead focusing on renegotiating (or withdrawing from) trade deals, doubling down on fossil-fuel sources, cutting back on regulations and cracking down on work visas.

So far, automation has disproportionately affected routine occupations, University of British Columbia economist Henry Siu noted in July during a White House AI workshop in New York. “Those are occupations that perform a narrow set of rule-based and repetitive tasks,” he said. That category takes in middle-class workers ranging from machine operators to travel agents to administrative assistants.