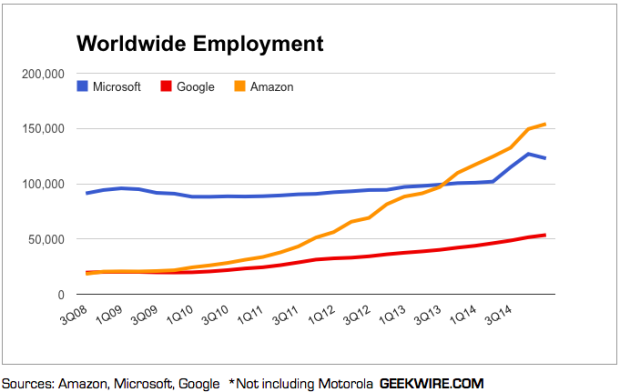 There’s a good reason why Amazon needs all that shiny new office space in Seattle: the company’s employee headcount keeps growing by leaps and bounds. Amazon reported today that it ended 2014 with 154,100 employees worldwide.

The company added 36,800 employees over the course of 2014, with 4,600 of them joining the company during the holiday quarter. It finished 2013 with 117,300 employees, meaning its workforce grew by a whopping 31 percent last year.

That highlights one of the biggest differences between Amazon and other major tech companies: it needs employees in its fulfillment centers to pack and ship items to its customers.

Overall, this has been a positive quarter for Amazon, which shattered expectations for its fourth quarter on Wall Street when it announced earnings of 45 cents a share.

Microsoft, meanwhile, saw a net reduction in headcount by 4,100 employees as the company underwent broad layoffs during the quarter as a part of its new direction under CEO Satya Nadella. The company plans to do more layoffs in the coming year as well.