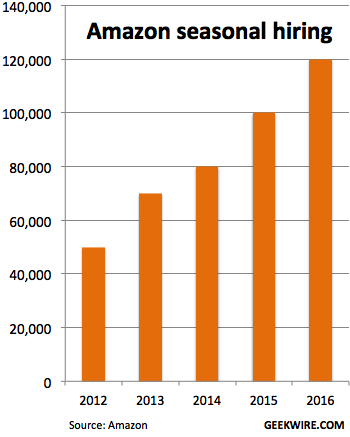 The numbers are closely watched each year as a barometer of Amazon’s expectations for the holiday shopping season, and as a measure of the Seattle-based e-commerce giant’s growth.

Seasonal hiring isn’t included in Amazon’s official employee count, which now stands at more than 268,000 people worldwide. However, Amazon says many of the seasonal positions lead to regular full-time roles. Last year, the company created 100,000 seasonal positions, and brought more than 14,000 of those hires on as long-term employees after the holidays.

Amazon’s seasonal hiring has more than doubled since 2012, when the company created 50,000 positions for the holiday season. The company has been steadily expanding its network of fulfilment centers in recent years and building out its own delivery system of planes, trucks and other vehicles.