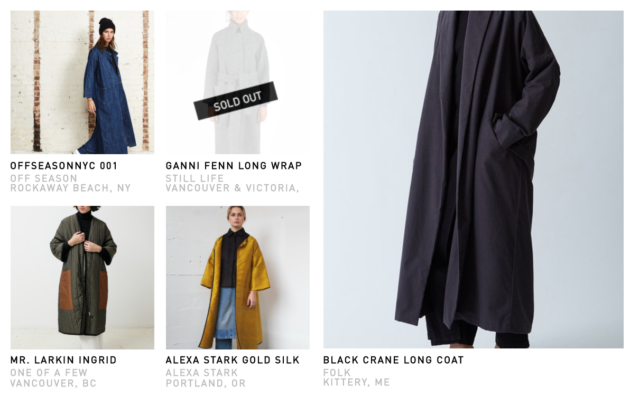 Garmentory has raised more cash as the company grows its e-commerce platform for independent fashion boutiques and designers.

The 2-year-old Seattle-based startup just landed a $2 million round led by MHS Capital, with participation from previous investors like Founder’s Co-op. Total funding to date is $3.6 million.

Garmentory, which graduated from Techstars Seattle in 2014, hosts a marketplace that connects more than 350 small brick-and-mortar boutiques and thousands of designers with online customers around the world. On some items, Garmentory allows customers to make an offer to the boutique itself.

Garmentory CEO John Scrofano, who previously led wedding planner startup OneWed, told GeekWire that sales have grown by 500 percent year-over-year, which he said is largely “organic growth with very little paid advertising.” He said 2016 was a “really big year for us.”

“We made the transition from seed stage — where you spend all your time working on product market fit and testing things — to building the foundation for growth stage,” Scrofano said. “We raised for the reasons that an entrepreneur hopes for: new staff to keep up with the aggressive growth and do more of what’s working, and new investment to build the next layer of sophistication and test even bigger ideas.”

Part of Garmentory’s secret sauce lies in its ability to bring the experience of discovery, personal service, and community to e-commerce, Scrofano said.

“We focus on emerging and independent designers, thoughtful and beautiful things made in fairly small quantities you can’t find unless you go to the really cool boutiques in the best cities in the country,” he explained. “We think this is what the majority of shoppers want; it just hasn’t been available to them before Garmentory. Department stores used to be a destination, but are starting to lose that war to the boutiques and online alternatives.”

Scrofano said that Garmentory is “creating the next generation of retail for the contemporary segment,” which he describes as apparel that sells in the $75-to-$600 range and can be found at retailers like Nordstrom and Barney’s.

“We have a very different view of the future for the contemporary segment than the department stores, though,” he added.

We invested in Garmentory because we see the opportunity to change the face of retail and this is the company to do it.

Garmentory isn’t the only Seattle e-commerce company using technology to build a new business in the contemporary fashion industry. Tech giant Amazon is also investing in fashion, with a new study projecting Amazon to surpass Macy’s as the biggest clothing retailer in the U.S. next year.

With Nordstrom also headquartered in Seattle, Scrofano noted that “Seattle might be center stage for the entire contemporary fashion industry.”

Garmentory, founded by tech industry vet Sunil Gowda and boutique fashion entrepreneur Adele Tetangco, will use the new funding to hire more employees; half of the 11-person team resides in Seattle, while the other half lives in Vancouver B.C. It will also expand to menswear next year.

As a result of the investment round, MHS Capital’s Vijay Nagappan will join Garmentory’s board of directors.

“We invested in Garmentory because we see the opportunity to change the face of retail and this is the company to do it,” Nagappan said in a statement. “We love that this platform brings the community of boutiques and designers to the forefront while providing consumers a new and curated shopping experience.”