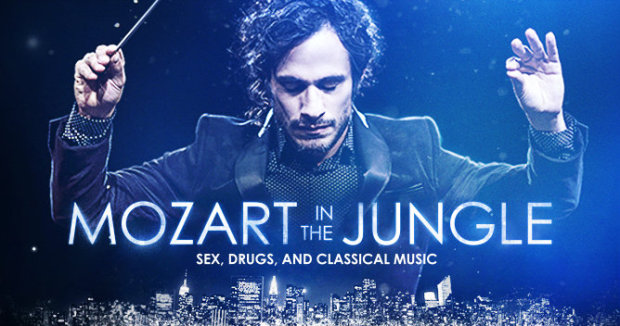 After Mozart in the Jungle, a dramatic comedy produced by Amazon Studios, won the Golden Globe on Sunday evening for Best Television Series (Comedy or Musical), director Paul Weitz included Bezos on his list of people to thank.

Transparent was actually nominated again this year for Best Television Series (Comedy or Musical), but Mozart in the Jungle ended up winning. It also beat out Netflix’s Orange Is The New Black.

And, like last year, Bezos was in attendance at tonight’s show, sitting next to Transparent star Judith Light. Here are some photos from Amazon Studios Head Roy Price:

Tonight’s Golden Globe award — Amazon now has four total — is another nice milestone for the company’s video production arm, which creates original content for the Amazon Video service. The e-commerce giant’s foray into original TV has yet to achieve the blockbuster status enjoyed by rival Netflix with its original series House of Cards and Orange Is the New Black, but is certainly gaining some momentum.

Mozart in the Jungle is available as part of Amazon Video, accessed by users that subscribe to the $99/year Amazon Prime program — a Golden Globe award will likely drive more membership sign-ups, which are estimated to be around 60 to 80 million worldwide. The show, based on the book of the same name, debuted in December 2014 and Amazon just released all 10 episodes of Season 2 this past December.

“Love, money, ambition and music intertwine in Mozart in the Jungle, a half hour comedic drama that looks at finding yourself and finding love while conquering New York City,” notes the show’s description on IMDb, which, by the way, is also owned by Amazon.

The show’s lead actor, Gael Garcia Bernal, received a nomination for Best Actor in a Television Series. Transparent stars Light and Jeffrey Tambor were nominated as well, Tambor for his leading role and Light for her supporting role in Amazon’s hit series. We’ll update this post if they end up taking home some hardware.

Update: Garcia Bernal did in fact win the Golden Globe for Best Actor in a Television Series (he did not mention Jeff Bezos or Amazon), beating out Transparent’s Tambor. That’s four Golden Globe awards for Amazon to date.

Update 2: A look at the final tally shows Amazon tied for first out of all networks with two awards. Netflix was shut out.

For this year’s Golden Globes, Netflix had eight nominations, beating HBO, which had 15 nominations the year prior. Amazon had five.

On a related tech note, Kate Winslett won a Best Supporting Actress in any Motion Picture award tonight for her role in Jobs. The movie’s writer, Aaron Sorkin, also won for Best Screenplay.