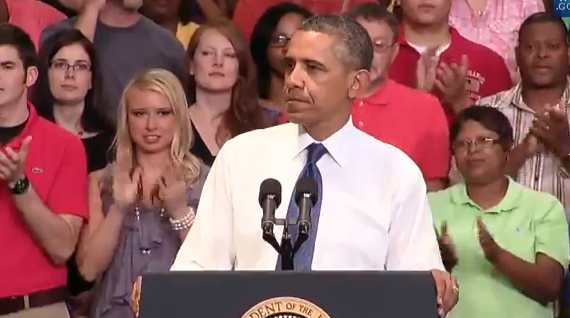 Amazon’s video business is teaming up with the White House to make President Barack Obama’s final State of the Union address available on-demand.

The Seattle tech giant will stream President Obama’s speech as part of a White House effort to reach more people wherever they may be — particularly those that have ditched their traditional cable subscriptions and replaced them with Internet-connected devices.

Amazon Video won’t carry the address live, but will make Tuesday’s speech available on demand via its platform one day later until the end of the week. You can also watch all seven of President Obama’s past State of the Union addresses on Amazon Video.

This isn’t the first time that the SOTU is being aired online. President George Bush had the first SOTU webcast in 2002 and the White House launched an “enhanced” live stream with annotations and extra information in 2011 with President Obama.

However, this is the first time the White House is partnering with an on-demand video service for the SOTU. It also shows Amazon’s video interest in not only entertainment but also government-related content.

CNN’s Brian Stelter noted that this deal is not related to Amazon Prime, the company’s $99 per year membership program that gives users access to streaming Amazon Video content.

You can live-stream and watch President Obama’s address on-demand at wh.gov/sotu and the White House YouTube channel. The White House is teaming up with online annotation platform Genius to add context to past speeches.

“So, for those who’ve cut the cord from cable and network TV: Whether you use a smart TV, web browser, mobile device, or tablet there’s a way for you to watch the President’s speech as it happens and on-demand,” White House Chief Digital Officer Jason Goldman wrote in a blog post.

Only 31.7 million Americans watched President Obama’s address last year, which was the lowest since Bill Clinton’s speech in 2000, according to Nielsen.

Here’s a preview for this year’s SOTU: