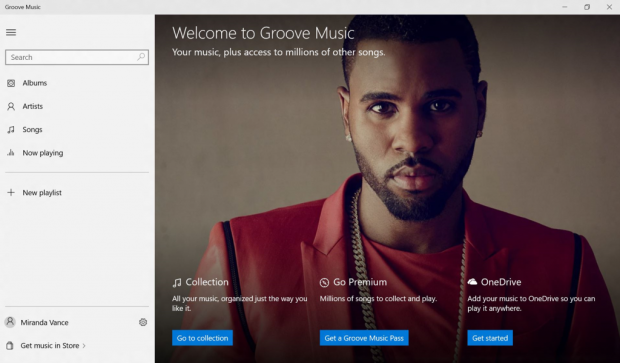 Microsoft announced today that it is rebranding the Xbox Music service as Groove with the release of Windows 10. The new branding won’t affect the core experience, leaving the music service much like what was shown during the Windows 10 unveiling earlier this year.

A Groove Music Pass will be available for $9.99 per month or $99 per year, with a large streaming music library and the ability for users to upload their own music collections to the OneDrive cloud.

In addition Microsoft is rebranding Xbox Video to Movies & TV. That service allows users to buy and rent TV shows and movies for their Xbox and Windows 10 devices. Together, the rebranded services solidify the Xbox name as a gaming brand while helping the other services grow as stand-alone options.

“Groove describes what people feel and do with music, and is more intuitive for our Windows 10 customers on what they’ll find with the app,” Microsoft said in a blog post.

Apple recently released its Apple Music service, which competes with Microsoft’s offering and many others. However, Apple Music still lives within iTunes, which also handles movies, podcasts and apps. Some have complained that iTunes is bloated and the name carries some baggage. Microsoft may have the opposite problem: It has offered music services under three different names in the past five years. Users could get 10 free songs per month with a Zune Music Pass subscription before Microsoft switched to the Xbox Music service.

Microsoft acquired the “Groove” brand a decade ago with the acquisition of Ray Ozzie’s Groove Networks.