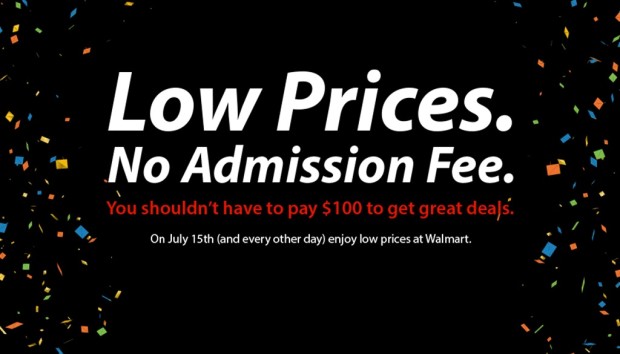 Walmart and other retailers are rolling out massive sales this week in response to Amazon, which is planning a huge sales event on Wednesday that promises to be bigger than Black Friday.

Late last night, Walmart announced that it would be rolling out thousands of discounts and that it would be lowering its shipping minimum to $35 from $50 to compete with the online retailer’s Prime Day sale, which requires customers to sign-up for its two-day shipping program to participate. 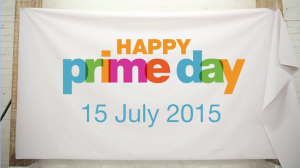 It did not call out Amazon by name, but it was clear that was the target. In a blog post, Walmart said “We’ve heard some retailers are charging $100 to get access a sale. But the idea of asking customers to pay extra in order to save money just doesn’t add up for us.”

Amazon’s sale on Wednesday is more than a sale — it’s a membership drive for its Amazon Prime program. While it will be a boom for Amazon if it can replicate a big sale in July on the same order of magnitude as Black Friday, this is also about adding members to that program, which is seen by the retailer as a cornerstone to gaining customer loyalty.

Amazon’s never disclosed how many members it has, but analysts routinely guess it is close to 40 million. They also say that customers who sign up for Prime are more likely to shop more and less likely to comparison shop. Obviously, adding more Prime members will in turn hurt Walmart and other retailers more than the impact of a one-day sales event.

UPDATE: Both sales events are clearly gaining the attention, if not by customers, but by the retailers themselves. After Walmart announced its sales event, Amazon issued a rare statement, accusing the retailer of only marking products online, and not also in the store.

Greg Greeley, VP of Amazon Prime, said: “We’ve heard some retailers are charging higher prices for items in their physical stores than they do for the same items online. The idea of charging your in-store customers more than your online customers doesn’t add up for us, but it’s a good reminder that you’re usually better off shopping online.”

Greeley did not provide any evidence backing up a statement and a Walmart spokesman did not immediately reply to emails seeking comment.

In the lead up to Amazon’s sale on Wednesday, the Seattle company is going to great lengths to call out attention to the various benefits of Prime. One benefit is Prime Photos, which offers unlimited photo storage online as long as you continue to pay for your membership. To highlight Prime Photos, it’s launching a photo contest, giving people a chance to win $10,000 in gift cards. Photos that best depict how you use Amazon Prime can be uploaded to a special page here. As part of this contest, artists in several cities were paid by Amazon to create their own interpretations.

Today, Amazon also announced a promotion that will give customers in the U.S., UK and Germany the chance to win a trip to see the Golden Globe award-winning Amazon Original Series Transparent’s season premiere this fall. 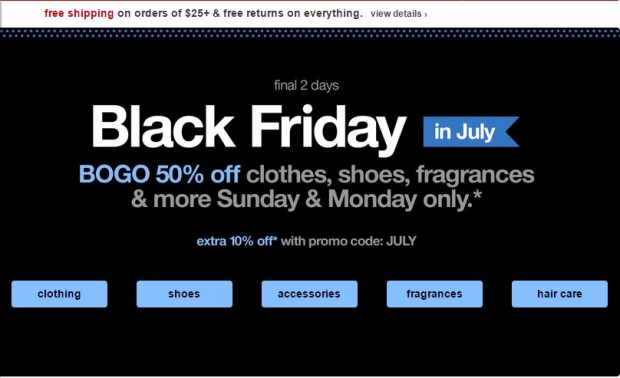 Amazon’s been vague on what products will go on sale this Wednesday. All we know at this point is that the 24-hour sale called Prime Day officially kicks off on July 15, the eve of its 10th anniversary.

Walmart says it will be offering “thousands” of Rollback deals this week, with some special “atomic deals” in the days to come. On its website, it also asks customers to “Dare to Compare,” promising prices that the same or lower than Amazon’s prices. Target is also currently offering its annual “Black Friday in July” event, which wraps up today. Some items are 50 percent off, and an extra 10 percent can be applied with the promo code “JULY.” Similarly, FreeShipping.com will give shoppers a 20 percent cash back at a 1,000-plus retailers, including Nordstrom, Macy’s, Sears, Kohl’s, etc.

Given that there is no big holiday coming up like Christmas, it’s unclear how these sales will end up doing, but everyone like a good deal.