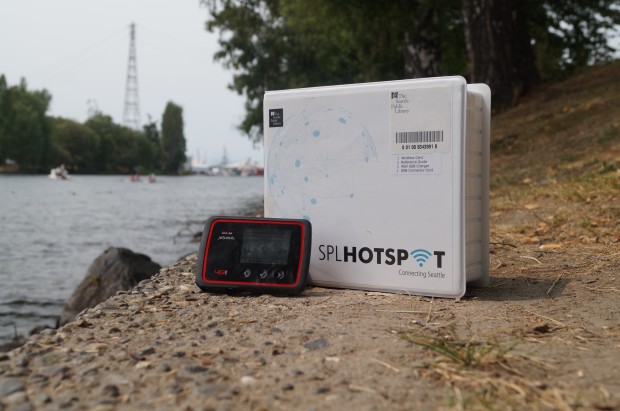 In late May, the Seattle Public Library announced a program to lend Wi-Fi hotspots to library card holders, free of charge, thanks to funding from Google.

Within the first day, 175 people had placed a hold on the 126 devices in open circulation, including me.

Now, nearly 1,300 people are waiting for a device, and another 200 units are being added to circulation due to an additional $80,000 grant from Google. My turn to check out the hotspot came a few weeks ago, and it was worth the wait.

Reviewing the SPL Hotspot is basically just reviewing the Verizon Jetpack MiFi 6620L, the 4G-enabled mobile hotspot that the library lends out. It’s a box about the size of a deck of cards that takes the 4G data stream sent out by Verizon’s cell towers and converts it into a Wi-Fi signal for non-cellular devices.

I used mine to work on my hour-long public transit commute in the morning, along with some outings to restaurants and parks where I wanted to get some work done.

It’s a great little box that gave me speeds as high as 22 mbps in strong signal areas, which is almost as fast as my home internet connection. It also provided service in some stretches of my commute where my AT&T service is spotty.

When I went out to Lake Wenatchee State Park over the Fourth of July weekend, speeds were much slower, but still faster than I got on my phone.

Turning the hotspot on takes a while, but connecting is quick and passwords are short but secure. You can see which devices are connected (you can connect up to 15 devices at a time) and block devices you don’t want connecting.

The interface is a little clunky since there are just two arrows and an enter button. But you shouldn’t need to get into the settings too much to use the free internet connection.

Battery life was fantastic. I charged it twice during my three-week checkout period. You can even use it as a backup battery for your USB devices in a pinch.

The SPL Hotspot program was introduced in reaction to a 2014 report that found 15 percent of Seattleites didn’t have home internet access, despite 88 percent of people owning a home computer. The library created the program with a one-year, $225,000 grant from Google, but it didn’t place restrictions on who could check out a hotspot.

“We came down on the side of not lending them under any sort of restrictions because we generally don’t lend anything in the library under those restrictions,” library IT director Jim Loter said.

Today, nearly 1,300 people are waiting for the 126 hotspots. However, the library is getting more soon. Google’s Community Affairs office has added $80,000 to the project so the library can get more hotspots into circulation.

The library hasn’t received any substantial complaints about the program yet. Most people have gotten connected easily. A survey sent out to each patron who checked out a hotspot hasn’t returned any complaints, but has received some praise.

“I think it should be accessible to everyone but people like me don’t have Internet at home and this has improved the quality of my life immensely,” said one anonymous survey respondent.

The library got funding to expand the program for now, but it’s also looking for money to continue the program once Google’s grant runs out.

“I haven’t really talked to another library system that has a long term sustainability solution,” Loter said. “We’re certainly interested in continuing the program as long as there’s high demand for it, and at this point we have a number of options that we’re exploring in order to do that.”

He’s been in talks with other library systems across the country like New York CIty and Chicago, which both received funding from Google for similar programs. He’s also been talking with the City of Seattle budgeting office and the Seattle Library Foundation to extend funding. The program will run through May 2016. After that, the library will either have to stop lending out hotspots or find another source of funding.