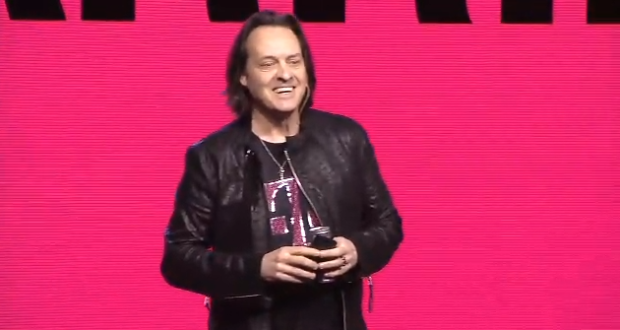 T-Mobile made yet another Un-carrier announcement on Wednesday, and this time it’s all about small businesses.

For “Un-carrier 9.0,” the Bellevue-based wireless company unveiled new plans for businesses that CEO John Legere said will be more than 40 percent cheaper than what AT&T and Verizon currently offer.

“We are going to do to the business sector what we did two years ago to the consumer sector,” Legere said at an event in New York City. 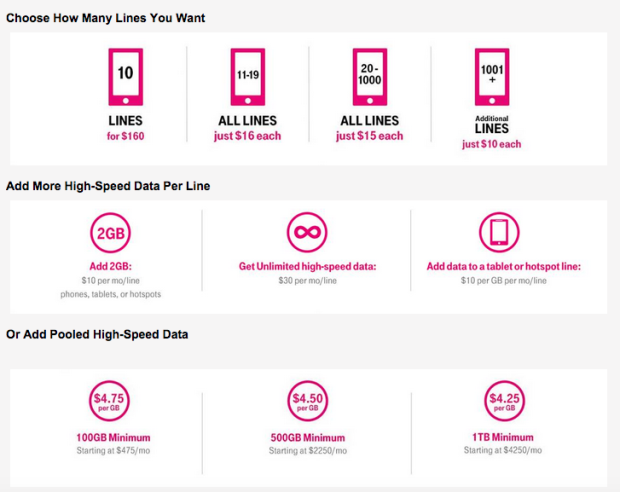 T-Mobile also announced today that it is offering free tools from Microsoft and GoDaddy to its business subscribers that have at least one line with additional paid data. Thanks to a partnership with GoDaddy, T-Mobile is offering a free .com domain and website — GoDaddy usually charges $12 per month for this. The carrier also inked a deal with Microsoft to offer businesses custom .com email addresses powered by Microsoft Office 365 — Microsoft typically charges $60 per year for this.

In addition, T-Mobile rolled out a “Business Family Discount” program, which will let customers count their business line as the first line on a family plan.

“For a family with just two lines, you’re going to save $876 with us versus AT&T and Verizon over two years,” Legere said in a statement. “And if you’re a T-Mobile customer and have a business line, you automatically qualify. In fact, AT&T and Verizon customers would save a total of $8.8 billion a year by switching over to the Un-carrier. That’s what I call a discount.”

T-Mobile COO Mike Sievert also took the stage in New York today and noted how “this is a really important problem we’re solving.”

“Over 70 percent of businesses say, ‘if I could just have something simpler, something less confusing, something more transparent — I’d really want that,'” Sievert said. “And that ought to feel familiar to you, because that’s the same stuff consumers told us two years ago before we radically transformed the consumer wireless business.”

In an interview with GeekWire, T-Mobile Vice President of Customer Loyalty Matt Staneff said that moving into the business space is a “huge move” for T-Mobile. He noted how businesses today spend $83 billion on wireless plans, $72 billion of which is paid to AT&T and Verizon. Staneff said the existing options for businesses are “even more complicated, old school, and restricted than it was for consumers” — particularly for small companies.

“There is a ton of potential to really bring a better way to do wireless in the business space,” Staneff said. “We are absolutely committed to this and believe it will provide a ton of value to businesses, as well as T-Mobile.”

T-Mobile’s Un-carrier 9.0 news today follows eight other announcements — all of which were focused on consumers — over the past two years that have helped the company steadily add customers as a result of its Un-carrier moves, including shifting customers away from the long-term contracts that have defined the wireless industry, offering early upgrades, free international data roaming, and paying early termination fees for people who switch.

T-Mobile did make a few consumer-related announcements today as part of Uncarrier 9.0, including the ability for customers to lock in their promotional pricing deals and have T-Mobile pay off device payment plans for people who want to switch from another carrier.