Sprint’s catchy promotion last month that offered to “Cut Your Bill in Half” was very effective in drawing new customers into its stores.

A new report released today said visits to Sprint’s stores jumped seven times the industry average during the first week of the deal compared to traffic the prior week, according to Placed, a company that measures foot traffic by tracking a people’s movements using their mobile phones.

Sprint is trying hard to maintain its position as the third-largest U.S. carrier behind AT&T and Verizon, while fighting off T-Mobile, which has promised to pass Sprint by the end of 2014. It’s unclear how the carriers will ultimately rank until fourth-quarter results are reported over the next couple of months. 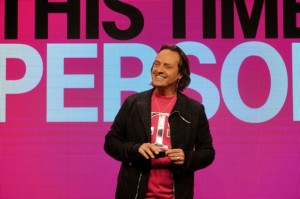 However, thanks to Sprint’s promotion, and other last-minute efforts, T-Mobile may not be able to pass the carrier after all. Last week, T-Mobile’s CEO John Legere wasn’t as fearless when it came to backing up his previous prediction that T-Mobile would surpass Sprint by the end of the year in number of subscribers.

“They have been swinging the bat since I made that statement, so we won’t know where things stand until we get the final score after we both report Q4 earnings, but whether it is now – or soon – I’m telling you, it’s a done deal!,” he wrote in an end-of-the-year letter.

While Placed was able to measure a sizable increase in track traffic to Sprint’s stores by watching the whereabouts of people who agreed to participate in the panel, it has no way of knowing how many of those customers actually became new customers.

The promotion, which was first offered in early December, allowed only AT&T and Verizon customers to upload a copy of their current bill online, or bring a copy of that bill and your phone to a Sprint store. Then, they could pick out a service plan that “most closely matches the data allowance in your current monthly rate plan.” They also received unlimited talk and text.

The spike in store traffic appeared to be relatively short-lived, although remained elevated during the second week.

The week after the promotion kicked off, store visits were 4 percent higher than the industry average. Overall, the deal accomplished what it set out to do. Placed said Sprint’s promotion led to a nearly 3 percent jump in marketshare across wireless store visits.

Separately, Verizon Wireless warned today that customer turnover in the fourth quarter was higher both sequentially and year over year as a result of increasing competitive pressure. However, despite this pressure, it said managed to increase the number of retail postpaid additions. More detailed results by the carrier will be reported on Jan. 22 as part of its fourth-quarter results.