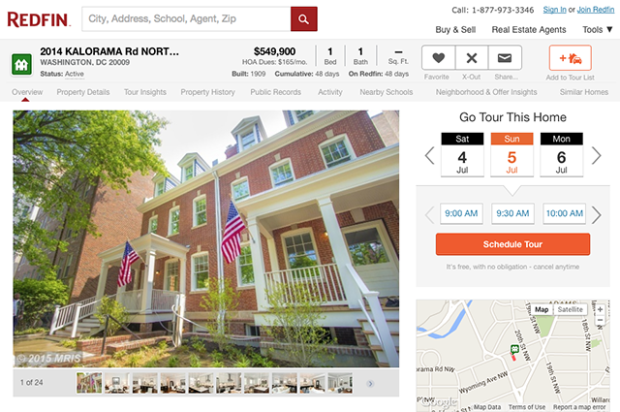 Redfin today is introducing a new service dubbed “Book it Now” that allows home shoppers to quickly and easily reserve a home tour, potentially getting a jump on other interested buyers. 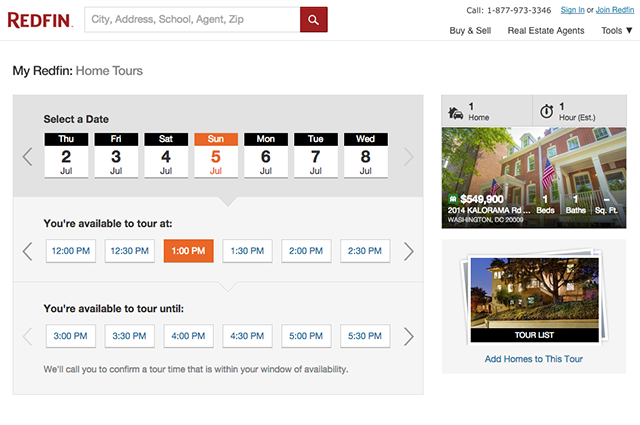 “Our goal is to turn every listing into an open house that you can see on your own schedule, without having to explain to anyone how much money you have or why you want to move,” said Redfin CEO Glenn Kelman in a release.

The concept flips the idea of the open house on its head, putting the power in the hands of the home shopper rather than the seller or agent.

Home shoppers also can plan out their schedules, choosing which days they’d like to tour homes. Starting today, the feature is available on 100 percent of listings on Redfin, with the company saying its overarching goal is to “turn every listing into an open house.”

“Book It Now lets Redfin clients get into homes quickly and not waste time and energy juggling schedules,” said Redfin agent Joseph Hunt, who is based in Seattle. “Getting the house you want in today’s market is all about speed and convenience.”

Here’s how the service works:  First-time home tour customers receive a phone call within two hours of the request, seven days a week from 8 a.m. to 8 p.m. If the request is submitted after 5 p.m., you receive a call by 11am the next day. For those who’ve already used the service, a phone call may not come at all, with an automated confirmation e-mail within two hours.

Our goal is to turn every listing into an open house that you can see on your own schedule.

This speed in the real estate game is important, especially since Redfin notes that some markets like Denver and San Francisco are seeing one third of all new listings under contract within 48 hours of their debut.

Prior to Book it Now, Redfin already touted its unique home tour process as a differentiator to other real estate companies. But this appears to be an even bigger push for the company, part of its plan to automate the real estate process, just as Uber has done for the taxi industry. Here’s more from the company’s blog post:

What makes it all work is Redfin’s fundamental value proposition: that real estate is better when agents and technology from one company work together to support your home search.

The result in this case is that sometimes we can book a tour without talking to you at all. In most cases, especially if you’re new to our service, we give you a call to see if you have any questions. Over time, we expect to automate more and call less.

And as we grow, we expect to get you into homes faster and faster. The more Redfin agents we hire, the more likely one’s close by. And our software will get better: at anticipating demand, at scheduling agents, at estimating tour duration. Already a third of our tour requests are to see homes on the day of the request, double what it was just four years ago.

With mobile devices now driving two thirds of our traffic, we expect in another two years that a third of our tour requests will be same-hour, not just same-day, coming from folks standing in front of a listing with their iPhones.

The flash sales we began seeing in real estate two years ago aren’t just the byproduct of a temporary inventory shortfall in a turning market, but a permanent shift caused by instant alerts setting a thousand phones abuzz minutes after each listing’s debut. Soon those alerts will have buttons for touring or even bidding on the home on the spot.

All along, Redfin has believed that we could bring more liquidity to the real estate market, where buying a house wasn’t so costly and cumbersome that you’d first have to sign up in blood to live in it for a decade. And liquid markets are fast markets. Today, when you see something you want, it can take days to see it, and months to get it.  Five years from now, it will all happen in a week or less.

An increasingly transient, contingent economy needs this, and Redfin and other brokerages are working hard to deliver it. As we do, it won’t just change how homes are bought and sold, but who buys them, and what it means to do so.

The part of this blog post that stuck with me was the sentence about the number of Redfin real estate agents who are close by to service clients. One could imagine — just as Uber of Lyft show nearby rides on a map — Redfin eventually will show which agents are close by to show home shoppers a new house.

Redfin continues to grow its presence after raising a $70.9 million venture round last December.