Redfin today announced $70.9 million in fresh funding, money that the Seattle real estate brokerage will use to continue its national expansion. Total funding in the 10-year-old company now stands at $166 million.

“As our business grows, our agents can be more local, and our ability to get people into homes quickly increases. With more market-share, we can pair buyers and sellers more efficiently,” Redfin CEO Glenn Kelman said in a statement. “We have already seen this happen over the years in our most established markets, but now we can invest in accelerating that process in new markets.”

Redfin now offers brokerage service in 48 markets, employing more than 1,000 agents. Over the past year, it has doubled the number of markets where it operates, and the new capital will be used to continue that expansion. We first wrote about the expansion efforts in May, with Kelman noting at the time that they had gotten better at introducing new markets even in places where some had said the model would never work.

For example, the company recently expanded in real estate-battered Detroit. It also just announced service throughout the state of New Jersey.

Redfin also recently introduced an advertising campaign, attempting to gain market share and raise awareness as it competes with established real estate brokerages. The company tells GeekWire that it will expand the campaign in 2015, following the initial tests from this fall.

Redfin is different than heavily-valued sites such as Zillow and Trulia, which operate as portals for real estate searches and are largely based on advertising. Zillow is in the process of buying Trulia in a deal valued at $3.5 billion. 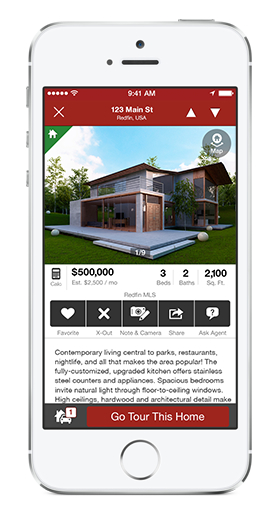 In the past, Kelman has been critical of the real estate portals, saying they will restrain traditional brokerage firms that actually are in the business of helping people buy and sell homes. With the new funds, Redfin could very well attempt to build a national portal of its own, building on its expertise in map-based real estate search, which it pioneered.

The fresh funding follows a $50 million round that Redfin raised last year. Investors in the most recent round — one of the largest in an Internet-oriented Seattle startup this year — include Wellington Management Company, Glynn Capital Management, Brothers Brook and Annox Capital Management. Existing investors from the $50 million round also participated, though early investor Madrona Venture Group did not participate. All of the funds will go to supporting the growth of the business.

A company spokeswoman deflected questions about a possible IPO.

“We’re focused on continuing to build a business for the ages that’s transforming how people buy and sell homes,” the company said. “While we’re not discussing future plans, we believe that we are building a business that is well suited to being an independent, publicly traded company.”

The company said it operated at break even in 2013, but with the new funds it is deliberately accelerating growth. It did not disclose total employee headcount at this time, but CTO Sasha Aickin recently announced his departure from the company.

SEATTLE–December 18, 2014–Redfin (www.redfin.com), the customer-first real estate brokerage, today announced an investment of $70.9 million, led by large institutional investors including Wellington Management Company, LLP, as well as Glynn Capital Management. Others include Brothers Brook, LLC, an investment firm led by Jeffery Boyd, chairman of the board of directors of The Priceline Group; and Annox Capital Management, led by Redfin board director Bob Mylod. Funds and accounts managed by T. Rowe Price Associates, Inc. and Tiger Global Management, LLC, who were among the investors from Redfin’s $50 million funding round in November 2013, are also participating.

Redfin has doubled the number of markets it serves over the past year, and this funding will support continued expansion to offer Redfin’s unique blend of full-service real estate and technology to millions of consumers. The money will also fuel Redfin’s ongoing development of new technology that makes every step of the home-buying and selling process better for those consumers.

“Redfin will put this capital to good use,” said Redfin CEO Glenn Kelman. “As our business grows, our agents can be more local, and our ability to get people into homes quickly increases. With more market-share, we can pair buyers and sellers more efficiently. We have already seen this happen over the years in our most established markets, but now we can invest in accelerating that process in new markets.”

Technology: Redfin invented map-based real estate search, then built technology to make every step of buying or selling a home better, from on-the-spot tour-scheduling to an online deal room to a targeted digital campaign for each listing.

Advocacy: Redfin’s on-demand service model takes the pressure out of working with its agents, who earn a bonus based not on the sale, but on the customer’s satisfaction with the sale. Redfin agents fight to get customers a good deal but also tell customers when to walk away.

Value: Because technology frees Redfin agents to spend their time serving — not searching for — clients, the company can offer an average savings of $10,000 in fees for a customer who buys and sells with Redfin. The company refunds up to half of the buyer’s agent fee, and saves a typical listing client 1.5 percent of the home value.