Redfin CEO Glenn Kelman says this is a critical time for Seattle and other emerging tech hubs, as the dam has broken in the Silicon Valley and cities across the country are about to get flooded with tech workers.

In Portland, the real estate company’s data shows 13 percent of their homebuyers this year started their search in the San Fransisco Bay area. Last year, that was just 3 or 4 percent.

“There’s going to be 25 Silicon Valleys in the next 10 years,” Kelman said onstage during a Startup Grind event in Seattle on Wednesday. “I just hope that Seattle and other cities don’t put their head in the sand the way San Francisco did.”

I just hope that Seattle and other cities don’t put their head in the sand the way San Francisco did.

Kelman spent a lot of time in the Bay area, where he founded Plumtree Software in 1997 and later took the company public.

He said when that region had its tech boom, it tried desperately to preserve its character by labeling all development as evil.

“So they just didn’t build anything and it became this vast science experiment about how high home prices could go,” Kelman said. “They didn’t preserve anything. … It’s just tech wall to wall and that is not what makes cities great. I just really want Seattle and Austin and Denver and Boulder and Boston and all these other cities to think about how we plan for the inevitable.” 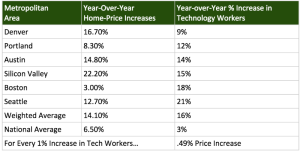 This isn’t the first time Redfin’s data has hinted toward a mass exodus from the Silicon Valley. In May, the company released a report that showed 25 percent of Bay area residents searching their site for houses were looking at a different market.

Kelman went on to described an internal debate happening at Redfin right now as the company decides whether or not it should take a public stance on the right and wrong ways for a city to grow.

“I think we probably will take a position, because I just can’t bear to see Seattle go the wrong way,” he said. “There is going to be amazing wealth that comes to these other cities because of technology. This oasis that existed only in San Fransicso and the Valley is going to happen elsewhere, but we can do it better than Silicon Valley. I really think we can.”