One of the most interesting trends we’ve tracked at GeekWire over the past few years is the arrival in Seattle of what we dub the Silicon Valley tech giants. Huge companies such as Facebook, Twitter, Dropbox, Apple and Alibaba all have established engineering centers in the Pacific Northwest — so many that we created a list of the more than 50 centers a few weeks ago.

But it’s not just big Bay Area tech companies that are looking at the Pacific Northwest. So are many tech workers who are starting to feel the pinch of skyrocketing housing prices. (Just this past week here at GeekWire, we talked to one of these tech workers who was looking to move to Seattle after more than a decade in the Bay Area). 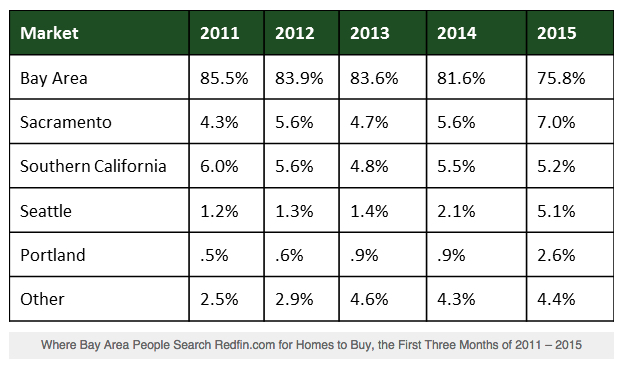 Redfin, the Seattle-based real estate brokerage which operates in the Bay Area, just concluded a fascinating analysis of home search behavior on its site. The results are startling, and they speak to a possible trend that could have huge implications for cities such as Seattle and Portland.

Twenty five percent of Bay Area residents on Redfin.com are now looking for homes outside of the Bay Area. That compares to one in seven residents who did so in 2011.

And where are these folks looking to live?

Kelman writes that people are leaving the Bay Area because they can’t afford to stay, noting that the median price for a Silicon Valley home now tops $1 million, more than double the price in Seattle, Boston or Portland.

But even with big salaries for Silicon Valley tech workers, Kelman writes that the pay doesn’t always keep up with the insane housing prices.

With the median home sale price of $565,000 in Seattle versus $1 million in the Bay Area, it is no surprise that tech workers are choosing to vote with their feet and investigate opportunities in Seattle, and to a lesser extent Portland.

The rising commercial office space rates also are coming into play, which Kelman digs into in-depth. Commercial rental rates in cities like Seattle, Portland and Denver are a real deal compared to the Valley, where the gross rental rate tops $55 per square foot. That’s having an impact too on the decisions by big companies to set up branch centers in Seattle or Portland.

This is going to be a fascinating trend to watch, creating perhaps more of the “Valley-ification of Seattle.” That could have serious impacts on every aspect of life in the Northwest — from traffic (already a mess) to housing prices (soaring) to recruiting (competing with the best and salary expectations from those in the Valley). Many in Seattle are already sick and tired of this trend, but the Redfin analysis indicates that things might get even worse.

Could a new wave of anti-California sentiment take over Seattle? (When I moved to Seattle in 1995, you’d occasionally hear folks complain about the Californians).

Redfin’s analysis indicates that the Silicon Valley transplants may be coming in droves.

The next few years could be a wild ride.