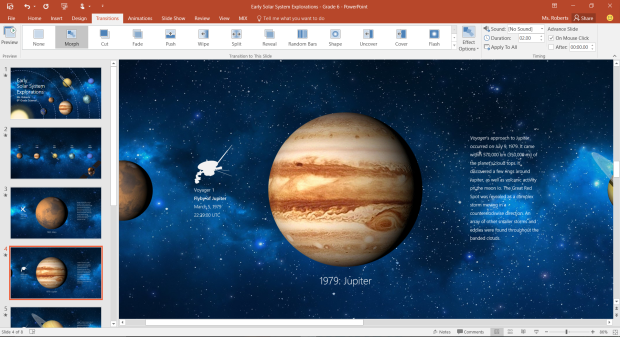 Over the years, various tools have debuted in an attempt to usurp PowerPoint’s role as the de facto presentation software for the masses. But neither tech giants like Apple and Evernote nor smaller startups have been able to spread into classrooms and boardrooms in the way PowerPoint has, thanks to the latter’s tight integration with other Microsoft Office products, and its robust feature set.

With new features announced by Microsoft today, that feature set is taking another step forward. PowerPoint’s two latest features aim to make presentations look ultra-professional without taking forever to build. And with the introduction of the Office Insider preview program, some users will be able to access new features early.

The most impressive feature is Morph, which lets users easily create robust animations by moving objects around the slide. Instead of forcing people to look for small changes as you go between slides, you can quickly animate the changes. While this can be as simple as changing the size of an on-screen object, users can also build more movie-like presentations.

To create the animation, users need to duplicate a slide, then just move objects to the next position you want them in. After selecting the Morph transition, PowerPoint will then fill in the frames between those placements as you go though your slide. Check out the video above for Morph in action.

PowerPoint Designer is Microsoft’s update to the PowerPoint templates of old. While those templates still exist, the new Designer feature makes adding photos to your slide easier. Microsoft worked with professional designers to create more than 12,000 possible options, with variables like picture placement, framing and transparency. But that many options would be overwhelming while building your deck, so Microsoft added machine learning to the equation.

When you upload an image, Designer analyzes it and suggests a handful of possible design options for it, ranging from a fuzzy background shot to a featured image in its own frame. It even takes into account subjects of your shots.

For example, if you have a shot of a bike on the street, Designer will make sure the bike isn’t completely obscured by the text on your screen. Or if you’re adding an image of a chart, it will choose layouts that bring that chart to the foreground so you don’t have to rearrange your text by hand.

Microsoft also announced Office Insider, a new program to let some users access the latest Office features early. Office 365 Home, Personal and University users can sign up for the new program, which gives them early access to the latest features across all Office applications.

The Office Insider program is different from other Microsoft preview programs like Windows Insider or the Xbox Preview program. While those offer users very early access to beta features that may be a little buggy, Office Insiders will likely get practically finished software just a couple weeks in advance. Users can sign up for the service today.

The new PowerPoint features are rolling out to Office Insiders later this week and will come to Windows Office 365 users by the end of the month. Morph will come to Mac later this year, while Designer will roll out to other platforms early next year.