Cooperman, the co-founder of Seattle user design and Web development shop Jackson Fish Market, showed off the latest version of the iPad app at a recent meeting in the GeekWire offices, including new social sharing and export functionality.

Perhaps the biggest differentiator with Slide Bureau remains its ability to adapt to different screen resolutions.

In other words, presentations created via Slide Bureau automatically adapt to the screen they are being viewed on. That makes it immediately responsive, meaning a user can easily view the content on a mobile device, tablet or desktop.

“If you go in PowerPoint or any product that makes slides today, you pick which format you want, except the problem is that this content gets presented on multiple devices and multiple screens, and ours automatically adapts,” said Cooperman. “We think of PowerPoint, and we think: ‘Oh, you are presenting at a meeting or to an audience.’ No. These tools are canvases on which people create visually-oriented content to be consumed in a variety of scenarios, and on variety of devices and in a variety of ways.”

Another feature of Slide Bureau is called Remote Control, allowing an individual to show off slides to people in remote locations.

“This laptop could be in China. It could be in Poland. It doesn’t matter,” said Cooperman. “I could have multiple people looking at the same deck, and I get to drive.”

That eliminates the idea of having someone on the phone, trying to tell someone to advance to slide four or five.

“I sat at Microsoft for 10 years trying to fix that problem, and wasn’t able to,” Cooperman said.

Asked specifically whether Slide Bureau is a PowerPoint competitor, Cooperman responded this way:

“There are lots of companies vying to take go and take a bite out of PowerPoint. PowerPoint is an amazing tool, but it is odd to me that you would pay money for a piece of software, and then pay designers to use that piece of software. Microsoft itself, at least in the past, has vendors to create slides in PowerPoint, the software that Microsoft makes. That’s crazy to me. You shouldn’t have to do it. The software should be good at the thing you are paying for it to do.”

Slide Bureau debuted in Feburary with about 100 templates, a number that has now grown to more than 400. Cooperman declined to disclose download numbers for the app, pointing out they don’t really matter at the end of the day (since many app builders are paying exorbitant rates to acquire customers who don’t stick with the product). 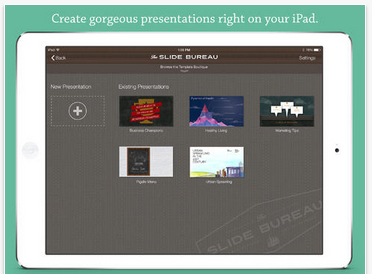 Slide Bureau has received a lot of interest from real estate professionals who are using the tool to create presentations for properties they are marketing.

“They don’t want to sit there and make slide decks. That is not their job. They want to sell,” said Cooperman of why they’ve achieved traction in the real estate vertical.

Slide Bureau may sound a bit like Seattle startup Haiku Deck, which also offers a free slide presentation tool for the iPad (as well as the Web).

But Cooperman — who says he loves Haiku Deck and co-founder Adam Tratt — said there are big differences, including Slide Bureau’s focus on enterprise customers.

“What we are building is an industrial-strength communication tool,” he said. “I don’t mind if you are at an Ignite talk and you want text on pictures, and you want to go use Haiku Deck. I’d recommend it. You go do that. That is not us. To us, it is not like there is some limited supply of visual communication that people want to do on this planet right now. There is endless amounts, and nobody really is meeting people’s needs in a broad way.”