With the arrival of apps like Meerkat and Periscope, live-streaming video clips from our smartphones seems to be the latest craze. People are recording everything from buildings on fire to hailstorms in Seattle as a way to share what they’re experiencing with everybody else. Live-streaming from mobile devices isn’t a new phenomenon, but the improvements in smartphone camera quality and mobile Internet connectivity offer a more seamless way to broadcast from anywhere at anytime.

What impact these apps will have on the technology landscape remains to be seen. But one particular industry where Periscope and Meerkat may cause some change is in the sports world.

The team also offered a glimpse inside the locker room before the match:

LIVE on #Periscope: In the locker room before our match with the Portland Pilots https://t.co/thPZiHfZUc

But it’s not just team personnel testing out the apps. We’re also seeing fans get in on the fun, too:

LIVE on #Periscope: Courtside-ish at the Wizards game. No guarantees about exciting plays… https://t.co/Np9iF9SLkF

Even the sports media mecca — ESPN — used Periscope on Wednesday:

These initial experiments elicit several questions: Given the insane amount of money networks spend for TV broadcast rights, are sports teams even allowed live stream their own games with an app like Periscope? Can fans do the same from their seats? And what other impacts will Meerkat and Periscope have on the sports world? 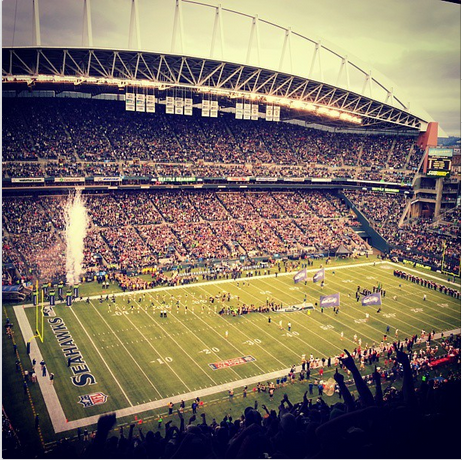 For starters, the NBA, NFL, and MLB have policies that restrict both reporters and fans from live-streaming game action. Put simply, it’s against their bylaws to allow anyone to broadcast live game action with a smartphone app like Meerkat or Periscope.

“Fans and reporters are not permitted to live-stream games from the stands or press box,” Alex Riethmiller, VP of Communications for the NFL, told GeekWire. “This is done to protect the agreements we have with our broadcast partners.”

Tim Frank, senior vice president of basketball communications at the NBA, said that “we have credential language that prevents news media — and ticket-back language that prevents fans — from streaming live in action in general.” He also noted that media are allowed to stream live press conferences and interviews to their own websites, but not to third-party platforms like Meerkat or Periscope.

Aside from press conferences, the NBA also says that “Non-Game Action Content” — which includes video taken at practice, interviews in the locker room, etc. — may not be live streamed. You can see the NBA’s other rules here.

The MLB, meanwhile, also does not allow live-streaming of live game action.

“MLB’s terms and conditions for credentials for media include language that prohibits live-streaming of game action or postgame interviews,” Rebecca Hale, director of public information for the Seattle Mariners, told GeekWire.

To get a sense of how strict the leagues are with controlling recorded video and video streaming, here’s a bit from the MLB’s media credential policy:

… any video related to Games, captured within the ballpark, and carried online, must be limited to 120 seconds and cannot be carried live; (c) no live or taped audio or video is permitted to be captured from 45 minutes prior to a scheduled Game time until that Game has concluded; (d) a manager’s pre-game interview or other content may not be transmitted live, and audio or video transmissions of such content may be transmitted online for no longer than 120 seconds; (e) a manager’s post-game press conference may be captured via video or audio and cannot be carried live or online; and (f) audio or video interviews with players, Club personnel and baseball officials posted online may not be longer than 120 seconds in duration; provided, however, that the Bearer will have the limited, non-exclusive and non-transferable license to use on its own online distribution platform product or site for news coverage of the Game and other editorial purposes up to a total of 120 seconds of the audio and video identified above in subsections (b-f) about each Game.

The MLB also has similar copyright laws prohibiting fans from live-streaming game action from their seats.

However, when you move away from the big leagues, the rules aren’t quite as stringent. For example, the Reign FC live-streamed its pre-season match without problems.

“In our specific situation, we believe we have the right to broadcast pre-season matches without any issues,” said Reign FC owner Bill Predmore. “For regular-season matches we have — as a league — collectively agreed to produce our own live broadcasts and distribute them via YouTube, plus work with a national broadcaster — such as ESPN or FOX — on a handful of national TV games.  As such, for regular season matches Periscope would be considered a promotional initiative designed to supplement the primary broadcast.”

Looking at the issue more broadly, Predmore said it will be interesting to see how leagues react to fans independently broadcasting via Periscope. After all, fans currently Tweet or post short videos on Facebook from games.

“The (National Women’s Soccer League) has not specifically addressed the issue thus far, but I would imagine all leagues will be forced to address the question pretty quickly,” Predmore said.

Predmore added that his club is thinking of using the live-streaming apps to broadcast locker room interviews or provide fans with a live view of the action from the bench or behind a goal.

Kimberly Veale, public relations manager for the WNBA’s Seattle Storm, said that her league has yet to make any changes to existing policies with the arrival of Periscope and Meerkat. The WNBA seems to be a bit more lax with its rules. For example, during what Veale called “open media times,” reporters are able to live-stream the action from practice, regardless of what platform the stream exists on. However, fans and reporters still cannot live stream from WNBA games.

Similar to the Reign FC, Veale also said the Storm front office is already brainstorming ways to use an app like Periscope to give fans a behind-the-scenes look at the team’s day-to-day processes. For example, the Storm will use the app to live-stream its “war room” for the upcoming WNBA Draft on April 16.

Much like the pro leagues, NCAA Division I conferences also have strict policies that prevent fans and media from live-streaming a game. Carter Henderson, assistant athletic director at the University of Washington, said it will be up to the Pac-12 Conference as far as determining how fans and media are allowed to use apps like Periscope at a game.

However, he did note that the apps could be a “great tool” for providing fans with an inside look at everything that happens outside of the actual game itself.

“For us, the challenge is how do you provide the best fan experience and not limit the experience at all, but at the same time protect the broadcast rights that have been in place,” Henderson said.

Henderson also added that even if fans were to live-stream games from their smartphones, most people would prefer to watch the live TV production regardless. Paul Swangard, managing director at the University of Oregon’s Warsaw Sports Marketing Center, agreed with that.

“I don’t see rights fees being impacted in the short run,” Swangard said.

However, Swangard noted that league officials will have to watch how apps like Meerkat and Periscope circumvent existing rights that they sell at a premium to traditional broadcasters.

“Imagine a ringside ticket-holder streaming the Mayweather-Pacquiao fight to fans not willing to pay for the PPV,” Swangard said. “The value of sport is embedded in the fan wanting to see it live. Teams will have become very vigilant about monitoring in stadium usage by fans and protecting those rights.”

But that may prove to be quite difficult. Think about 70,000 people at an NFL game — even if a small subset of those fans decide to launch a Periscope stream, can the NFL really track down each user and shut down those feeds?

Another impact the live-streaming apps may have is on in-stadium WiFi networks that could become more clogged given the data required for streaming. Norman Rice, senior VP of corporate development at Extreme Networks — which built the WiFi system at CenturyLink Field in Seattle — said that teams will need to prepare for the increase in data usage by fans.

“Accommodating 70,000 fans in one location overwhelms traditional cellular systems, which is why the combination with Wi-Fi is required to handle the amount of users interacting with these types of apps,” Rice said.

It will be fascinating to watch how front offices and fans experiment with apps like Periscope and Meerkat. For now, leagues seem to be relying on existing media rights policies to regulate the live-streaming that these apps enable and are very much in a wait-and-see mode. Regardless, this technology certainly has the potential to change the sports fan experience.